Twitter’s rolling out an updated tweet analytics display, available on each tweet, which will provide more specific performance insight, with extra engagement elements listed in the data.

As you can see here, the updated tweet analytics display will include insight on replies, retweets and Likes, as well as more specific data as to where your tweet impressions have come from, and further notes on link clicks and engagements.

For comparison, here’s the current tweet analytics display (on desktop). 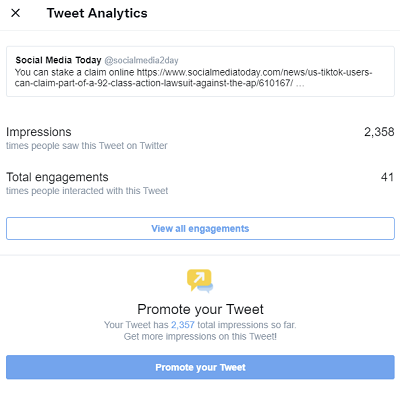 You can also access data on profile clicks and Likes by tapping on the ‘View engagements’ button, but the new format is far more intuitive, and includes more data insights to give you more immediate insight on each specific tweet.

Twitter’s analytics tools are still a way behind some other platforms, and they got even more limited when Twitter removed the ‘Audience Insights’ element from Twitter Analytics last June.

Twitter is killing the Audience Insights page on Jan 30

For now, you can find this page at https://t.co/eOk5ECahfJ pic.twitter.com/YIRwqMdmDM

You can still glean some additional info from Twitter Ads (even if you don’t run a campaign), but Twitter’s analytics tools are fairly restricted, and aren’t overly easy to use if you’re looking to get more granular data on performance.

Which is why it’s also good to hear that Twitter is also looking to roll out more analytics updates in the coming months, which could provide more data to go on to help improve your tweet strategy.

The question then is whether these tools will be free or paid. One avenue Twitter could take would be to add more advanced analytics features into its Twitter Blue subscription service, or another business tier of the same (Twitter Red?), which would provide an additional monetization avenue for the platform, and would likely be of significant interest to social media marketers.

Due to the public nature of Tweets, many third-party tweet analytics tools have been developed over time, with several becoming key options for advanced marketing efforts. Twitter, however, could provide even better versions of the same, and if it really wants to maximize its revenue potential, in line with its ambitious growth targets, it could look to implement its own, native versions of these tools with an alternative paid offering - which could be a very valuable addition, depending on how it’s done.

But it could be another option – watch this space.

Twitter says that it’s planning to make its new tweet analytics display available to all users by mid December.