After announcing its new 'Manipulated Media' tag last month, which is designed to reduce the potential impact of deepfakes and digitally altered videos that misrepresent what actually happened within a given incident, Twitter applied the tag for the first time a couple of weeks back, on a video of US Presidential candidate Joe Biden, which had subsequently been re-tweeted by President Trump himself. 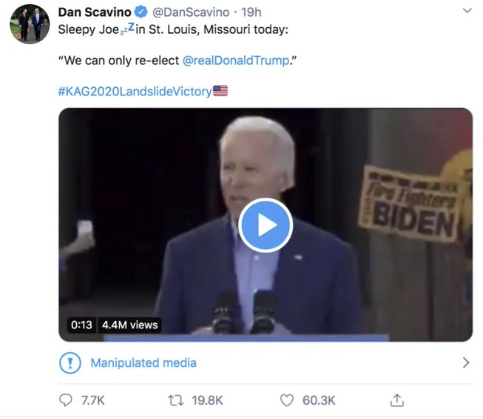 The application of the tag lead to some controversy about how it will be applied - but aside from this, many users also noted that the tag is simply too small, and too easy for people to miss.

If Twitter's going to acknowledge that such content has been edited, the tags need to be more stand out, some have suggested, in order to make them useful.

Twitter has been paying attention to the feedback, and this week, it noted that it will be looking at ways to make the tags more obvious in future.

As part of a new rule, we may add a “Manipulated media” label to videos and photos that've been edited and deceptively shared.

We heard the label isn't noticeable, so we're working to make it easier to see on your timeline and visible if you tap into a Tweet or go to a profile. https://t.co/EgNJJNXWjU

On one hand, this is a good thing - as noted, if Twitter's going to the effort of tagging such content, it needs to ensure that people pay attention to the warning.

But then again, several people have also raised concerns as to how Twitter is applying the tag.

Rather than policing 'deepfakes', or clearly edited content, some have complained that Twitter's rulings on what's manipulated go too far, and in some early cases, that Twitter may not be applying its ruling fairly, particularly in regards to political content.

The Biden video is the key example. This week, the Trump campaign asked for Twitter to tag this video, and similar variations of it, as 'manipulated media', because it suggests that President Trump called the COVID-19 pandemic 'a hoax' some weeks back.

The Trump campaign's argument is that this is no different to the supposed manipulation of the Biden video - for context, here's the Biden video shared by Director of Social Media at the White House Dan Scavino.

In the full video, however, Biden's actual, complete statement is:

"We can only re-elect Donald Trump if in fact we get engaged in this circular firing squad here. It’s gotta be a positive campaign.”

The Trump campaign argues that the clip of Trump labeling COVID-19 a hoax lacks context, in the same way that the Biden video fails to provide the full view.

Is that balanced application of Twitter's Manipulated Media rules?

No doubt people will have different interpretations of such, but the argument may suggest that Twitter's new regulations are not totally clear-cut as yet.

Either way, Twitter is standing firm - it denied the Trump campaign's request to tag the highlighted videos with the Manipulated Media tag. And now, Twitter's working to make the tags even more present, with a view to further application in future.

It seems like a positive move, but no doubt we can expect to see more disagreement on what, exactly, Twitter's rules on this front mean as the Presidential campaign lurches forward in the coming months.