Last month, Twitter rolled out its new tweet reply control options to all users, which provide the capacity to dictate who's able to respond, or not, to your tweets.

As you can see here, you now have the option to limit who can reply to each of your tweets to:

​And while it hasn't seen mass use, some brands have found creative and interesting ways to apply the new restrictions, as Twitter's UK blog has highlighted in a new post.

Looking at brand usage of the option, Twitter UK has provided five examples, which could help get you thinking of how they might apply to your strategy.

The first example is Heineken, which used the option to stop replies to this tweet, in order to underline the core message itself, as opposed to any subsequent debate. 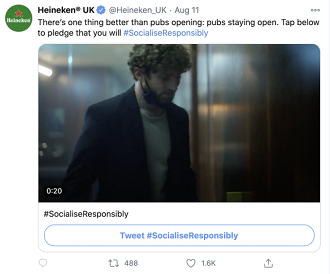 As you can see, without the option to reply, that puts more emphasis on sharing the message instead, which could be a good way to reiterate such in your strategy.

Mark and Spencer has used the tweet reply controls on this promotional message, which again, puts more emphasis on the product itself, limiting subsequent debate and discussion.

This one is more in line with the original purpose of the new controls - the English Football League recently held a Q and A session with broadcaster and speaker Charlie Webster for Mental Health Awareness Week.

Afternoon, @CharlieCW! We’d love to chat about the work you’ve been doing during #MentalHealthAwarenessWeek.

Got time for a quick Q&A? ???? pic.twitter.com/b1oHJyQXlr

That can make it easier to follow along with the focus conversation, as opposed to the subsequent tweet stream being flooded with replies from people following along with a certain hashtag.

A key example in this case was an interview between journalist Kara Swisher and Twitter CEO Jack Dorsey early last year, which was conducted via tweet. One of the key criticisms of the discussion was that in following the #KaraJack hashtag, it was almost impossible to stay up to date with the actual questions and answers, because the hashtag stream was flooded with other comments.

At the end of that discussion, Dorsey tweeted:

“This thread was hard. But we got to learn a ton to fix it. Need to make this feel a lot more cohesive and easier to follow. Was extremely challenging.”

This could be a good option for brand partners and affiliates - as demonstrated by KitKat, you can use the controls to focus the discussion onto key players.

The question was actually inspired by a customer asking what other chocolate bars' favorite song is.

That could be great for, say, getting opinions from industry cohorts on the latest updates, or sharing expert knowledge from partner brands.

And then there are the joke tweets.

Wow, you guys must really love our newer fries; guess they're sticking around!

Twitter actually used the exact same joke in its announcement of the option, taking away the reply option, so they're only left with one choice.

Reply if there’s a better app

But this is only one example of creative ways in which the option could be used - you could stop replies and only allow quote tweets, for example, and have that as the central creative element of a campaign. You could use it in a light-hearted way to say 'on this issue, we don't care about your opinion', or maybe something less confrontational - but either way, there are more options to consider with these new tools available.

It's worth considering how the option might fit into your Twitter strategy, and if any of these examples could align with your own approach.