Honestly, Twitter's efforts on content discovery are difficult to understand at times.

Back in 2015, then Twitter CFO Anthony Noto told investors in an earnings call that the platform had been struggling to grow because it lacked the mass market appeal that other platforms enjoyed.

"Simply said, the product remains too difficult to use."

That became a key area of focus for Twitter, and since then, it's put significant effort into making the app easier to understand for non-users, and for people to more easily be able to find profiles, and then topics, that they can follow in order to get the most out of the platform.

And for the most part, those have made sense - but every now and then, Twitter announces something like this:

Now testing on Android: You may see a suggestion to follow a group of relevant accounts on the profile page of someone you just followed. You can instantly add all the accounts with a single tap and easily remove the ones you don’t want to follow. pic.twitter.com/fayS9uIFvV

"You can instantly add all the accounts with a single tap and easily remove the ones you don’t want to follow."

Which seems like a lot of extra work, following clusters of around 20 accounts at a time, then going back and weeding out those that you don't like. Seems like a surefire path to cluttering up user feeds, and while it may enable some relevant discovery, surely there's a better way to connect people with personally relevant accounts follow, as opposed to automated suggestions based on what other people tweet.

The recommendations here, as reported by TechCrunch, are based on algorithmic considerations:

"[including] the profile you’ve just visited, or if people who follow that user tend to follow certain other users."

So, maybe they could be relevant. Possibly. But based on experience, finding 20 relevant people to follow at once is tough, and while, as Twitter says, you can just get rid of those you don't like, that doesn't seem like an optimal way to guide users towards more relevant tweet content, and boost user engagement.

The issue, in Twitter's case, lies in the signals - or lack of them - that Twitter's able to track and utilize in providing you with more relevant recommendations.

As noted by analyst Eugene Wei in his recent assessment of the effectiveness of TikTok's algorithm, Twitter's lack of direct cues in its process makes it difficult for Twitter's systems to get explicit feedback on what users want to see.

"If [Twitter's] algorithm were smarter about what interested you, it should take care of muting topics or blocking people on your behalf, without you having to do that work yourself. That you have to follow people at all on Twitter to get interesting content is, one could argue, a design flaw for what could be a powerful interest graph."

Wei explains that TikTok's algorithm is particularly good at showing you more of what you like, and less of what you don't, because TikTok clips are shown one at a time, in full screen, and all of your actions are based on each specific video, providing clear feedback on each. That enables TikTok to learn more about what you like, which other platforms are not able to do as effectively because the news feed format includes various posts on screen at once, and there are fewer explicit actions that you can take to register your interest, or lack of it.

Twitter's probably the most susceptible to this. With so many tweets on screen, its systems can't know what you're reading, what you're most interested in, and Twitter therefore needs to rely on user feedback to show you more relevant content. That puts a lot of onus on each user to curate their feeds, which leads to more manual work, and potentially, a worse user experience, at least until you're able to cultivate a more effective, engaging feed of people who tweet things that you like.

If Twitter's system had more inputs, it could negate some of this effort, but instead, it reverts to mass follow recommendations like this - which is even more confusing when you consider that Twitter was literally prompting some users to do the exact opposite back in 2018. 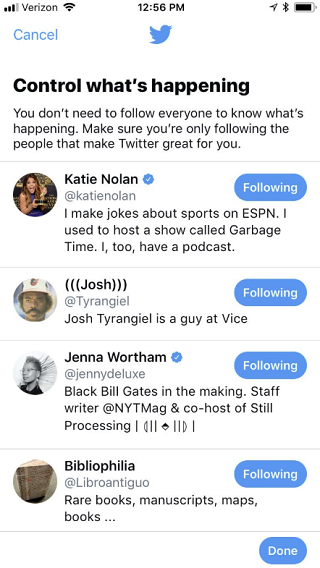 As you can see here, Twitter ran a small test in 2018 which called for users to review the profiles that they were following, in order to improve the relevance of their feed. The listings, based on accounts that users weren't engaging with, looked to narrow down feeds, which, for most regular Twitter users, makes more sense.

But then again, the focus of this new push would be new users who are looking to establish a list. But while the two opposing prompts cater to different user subsets, it still feels like a flawed approach, cluttering people's tweet streams with tangentially related users, then putting it on them to pare it back as they see fit.

Basically, Twitter needs to improve its content recommendation processes, and it should be able to do so by more effectively mapping user interests and correlating lists. Twitter actually is working to do this with its improving topics and list search options. But clearly, it still has a way to go, and mass-follow options like this are probably not the way forward in this respect.

The new recommendations are being shown to some users on Android.