After outlining its potential plans to add warning labels to controversial tweets from high profile users back in March, Twitter has this week announced that these new labels are now going live, which will provide more clarity as to why and when Twitter has chosen not to remove a tweet that violates its rules. 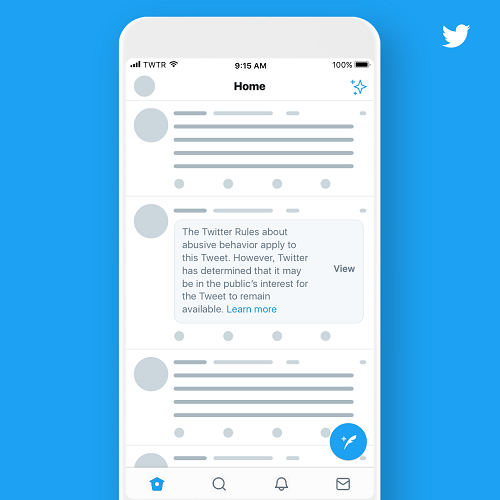 "A critical function of our service is providing a place where people can openly and publicly respond to their leaders and hold them accountable. With this in mind, there are certain cases where it may be in the public’s interest to have access to certain Tweets, even if they would otherwise be in violation of our rules. On the rare occasions when this happens, we'll place a notice – a screen you have to click or tap through before you see the Tweet – to provide additional context and clarity. We’ll also take steps to make sure the Tweet is not algorithmically elevated on our service, to strike the right balance between enabling free expression, fostering accountability, and reducing the potential harm caused by these Tweets."

As you can see in the example above, the new warning will state that, despite the tweet violating Twitter's rules, the company has chosen not to remove it, with a tap-through 'View' option to see the actual tweet. That will address the user concerns around the spread of anti-social, and concerning messages on the platform, while still enabling Twitter to share the original content, and host the subsequent discussion.

It seems like a good compromise - the controversial tweets of high-profile users have become an uncomfortable battleground for Twitter in recent months.

Whether it's condoning abuse, calling for audience action or even threatening nuclear war, Twitter has maintained that tweets from high-profile users should remain live on the platform, even if they violate the rules, because such tweets are "in the public interest". That means that these users are under a different set of rules to everyone else - and that being the case, there are, essentially, no defined rules for them, which leaves Twitter in a difficult editorial area, where it arbitrarily decides what's okay and what crosses the line.

Alex Jones, in Twitter's estimation, crossed the line, President Trump, at various times, has not. With this new process, Twitter will be able to maintain its platform rules as a key baseline for all users, while hiding those tweets that violate them and reducing their reach.

Twitter says that the new warning labels will be applied to violating accounts which meet these three criteria:

Twitter also notes that, even if an account does meet these measures, if the issue relates to direct threats of violence, or calls to commit violence against an individual, they will be "unlikely to be considered in the public interest" and will be removed outright, as opposed to being hidden behind the new label.

"In instances where a Tweet violates our rules and our review doesn’t find that it would be in the public interest to leave it up, we will require the account owner to remove the Tweet. Either way, this notice will make our decision-making clearer."

If the new label is applied, that tweet will also be removed from searches, Life Events pages, recommendations and the notifications tab. The label won't be applied retroactively, but will be instituted from today forward, helping Twitter provide more transparency in its decisions.

As noted, it seems like a good compromise from Twitter, balancing its desire to maintain public discussion around important issues, while also adding more clarity around its process. The fact that such tweets will not be highlighted in the various discovery surfaces and notifications will also significantly reduce exposure - though it'll be interesting to note whether labeled tweets can still be embedded in other places, without that label present.

That said, you could screenshot it, there are ways that third-party outlets could further amplify the same. Still, it may help Twitter reduce the anger and frustration around its rule enforcement - and lack of it at times - while also helping to bring more civility to the discussion. Chances are, most of the high-profile users who might be impacted won't want their messaging to be censored, and the risk of having their tweets hidden could inspire them to re-think their wording before publishing.

Either way, it's an interesting move from Twitter, which should help improve its process.