The skies - and the Twitterverse - haven't exactly been friendly for United Airlines recently. 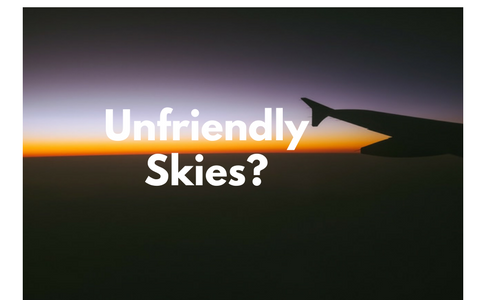 Just two weeks after an uproar about whether leggings are appropriate attire for a plane ride (turns out they are, unless you're traveling as a guest of an employee), United once again caused a social media backlash when a video surfaced of a man being forcibly removed from a Sunday evening flight.

In both cases, United appeared to exacerbate the public's outcry with its responses.

The leggings incident - in which a passenger reported on Twitter that "A @united gate agent isn't letting girls in leggings get on flight from Denver to Minneapolis because spandex is not allowed?" was met with this response from United:

@baddestmamajama United shall have the right to refuse passengers who are not properly clothed via our Contract of Carriage. ^FS

@shannonrwatts In our Contract of Carriage, Rule 21, we do have the right to refuse transport for passengers who ... https://t.co/52kRVgaCyb

Similarly, when separate videos appeared on both Facebook and Twitter this week of a man being forcibly removed from a flight by the police because he wouldn't give up his seat on an overbooked flight, United responded with an explanation that didn't seem to grasp the gravity of the viral video:

@EPCoan We apologize for the overbook situation. Further details on the removed customer should be directed to authorities. ^RD

@USAnonymous Flight 3411 from Chicago to Louisville was overbooked. After our team looked for volunteers, one customer refused to leave ^MD

United CEO Oscar Munoz then issued a public statement to "apologize for having to re-accommodate these customers" which led to even further public backlash.

So what went wrong from a social customer care perspective, and what could United have done differently?

Ironically, United should take a cue from its own response in 2015, when it was lauded for a terrific customer service response during a crisis in which its systems went down for several hours.

In that case, the airline proactively alerted customers of the problem, taking responsibility for it and giving assurance that it was being fixed while also apologizing for the inconvenience. They later provided an update once network connectivity was restored, and offered passengers an easy online method to change flights. Finally, United posted a 42-second video of Sandra Pineau-Boddison, senior vice president for customers, who demonstrated empathy, transparency, and helpfulness.

In these recent incidents, however, United appeared to hide behind its own policies - a tactic which almost assuredly will anger customers and onlookers alike, especially if those policies appear outdated or inflexible.

"Remove 'policy' from your employees' vocabulary," says customer service expert John R. DiJulius in his book, The Customer Service Revolution. "This has become such a big issue, a crutch..."

United also did not apologize, did not take responsibility, and did not demonstrate empathy in either the leggings or the viral video case, as it did with the system outage. Further, the company used industry terms like "Contract of Carriage," "overbooked," and "re-accommodate" instead of talking like their passengers would talk.

These stories are a reminder to all brands that offline experiences can quickly come online, and if brands don't get the offline experience right, they will suffer the consequences in social media. Everyone with a smartphone can snap a photo of their poor experience and post it to Facebook or Twitter in mere moments - and they're doing so, at an alarming rate for brands. When this happens, friends and followers are witnesses to the experience and often rally to support those who feel affronted.

Because of this, brands should revisit old policies - like dress codes and finding "volunteers" to leave overbooked flights - to reduce the likelihood of negative public incidents and empower employees to be flexible when warranted. Companies should also try to eliminate industry jargon that makes customers feel like they are on the outside of an inside joke.

What United did do right was to respond; brands must confront public incidents on social media head on. But it is absolutely critical to show some amount of empathy that's appropriate for the situation, to add a human feeling to the response. One has to believe that the human beings that work at United were as shocked by that video footage as everyone else - but that wasn't conveyed in their responses.

A quick scroll through United's Twitter feed suggests that the airline's agents are well-trained to show empathy and genuinely try to solve the problems of literally thousands of passengers every day. In these situations, however, the responses appeared uncaring and defensive, which doesn't play well in social media. Had United shown remorse and attempted to explain themselves in plain English - or even just promised to investigate the incidents - and then remained quiet to let the news cycle move on to the next big story, these public relations crises may have been minimized. And had they empowered their ground employees in both cases to take more reasonable actions in the first place, the crises could have been avoided entirely.

Dan Gingiss is the author of Winning at Social Customer Care: How Top Brands Create Engaging Experiences on Social Media.