Facebook is taking the next steps in turning WhatsApp into a critical connector for more functions with the addition of a new local business directory in the app. 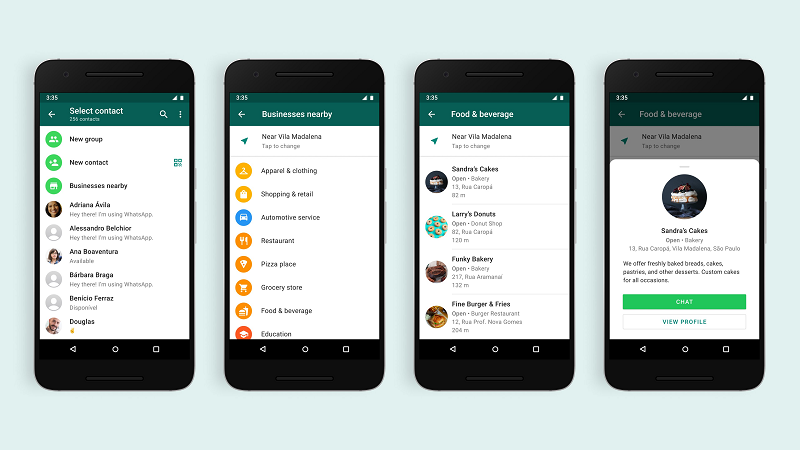 As you can see in these examples screens, the new option will enable users to tap on ‘Businesses Nearby’ in their WhatsApp contact listing, which will then show them a listing of active local business profiles in the app. From there, users will be able to tap through, and view the businesses full profile, where brands can showcase their products, in addition to facilitating direct contact.

That could enable a range of new use cases, and with WhatsApp already being the dominant messaging platform in many regions, the opportunity exists for Facebook to convert the platform into an eCommerce juggernaut, which could power the digital transformation in developing regions, and make WhatsApp the essential, day-to-day tool for billions of people.

If it can get it right.

The template here is the way Chinese chat apps have become functional utilities in that region, with people doing everything from paying for public transport tickets to buying their daily groceries, all through messaging apps.

Based on this, Facebook has been trying to make messaging apps a more central element in western regions for years, but thus far, most of those efforts have fallen flat. For example, Messenger Bots were the key focus of Facebook’s F8 developer conference back in 2016, but they never saw significant take-up, while other commonly utilized elements in China, like QR codes, haven’t been as readily adopted in other regions (or, at least, they hadn’t until COVID came along).

But WhatsApp presents a different opportunity. With WhatsApp, Facebook is already at the forefront of the digital transition in emerging regions like India and Indonesia, which will enable Facebook to help guide user behaviors from the beginning, and via a platform that’s already present on almost every users’ mobile device.

Which is why new eCommerce tools like this are so important.

In a broader sense, the option will also help maximize business discovery – and with more than 175 million people already messaging businesses in WhatsApp every day, there’s also a lot of potential on this front, which could make it a highly valuable addition.

And maybe, if it all works out right, Facebook will be able to start generating real revenue from WhatsApp, which it purchased for $19 billion in 2014.

But that’s the next step. Right now, WhatsApp is launching the first stage of testing for the option with users in Sao Paolo, Brazil. WhatsApp is used by around 93% of Brazilian smartphone owners daily, and with thousands of local businesses becoming discoverable in the app, the initial test pool should give it a good indication of how the process will function on a broad scale.

WhatsApp is careful to note that the new option has been built in a privacy-focused way – “we’re not logging your location or what businesses you browse.” An important qualifier considering the backlash against the platform’s recent privacy policy update, while WhatsApp also notes that it will consider a broader roll-out in the coming months.

It may not become a massive consideration for western brands, but it’s huge in Facebook’s broader scheme, and could eventually facilitate connection for more businesses into more markets.