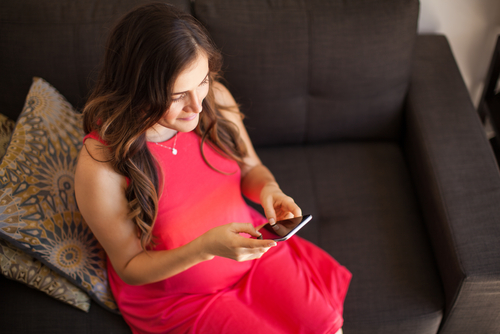 Hey social media marketers - is your target audience, or part of your target audience, parents? If so, Pew Research has some data for you - in the latest Pew Report, researchers have looked at how parents, specifically, are using social media, providing a wide range of insights into what platforms they use, how often they use them and who they're connecting with. The report provides some great data that can help marketers better understand and focus their advertising efforts to this demographic set - here are some of the key findings from Pew's analysis.

How Parents Use Social Media

Pew's research, which incorporates the results from more than 2,000 adults in the US, first investigated how parents are utilizing social media channels. The results provide some interesting perspectives on what parents use social for. 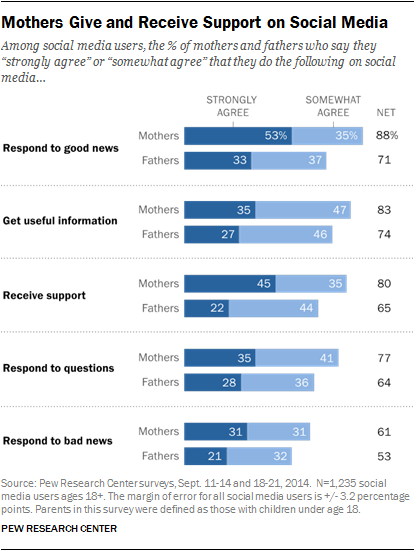 Overall, 81% of parents look to respond to good news shared by others on social networks. This is an interesting stat, and goes some way towards building understanding of why parents are on social and what they get out of it. Such a high number of parents using social platforms to actively encourage others by responding to good news shows that they see social as a connective device for news from family and friends. That's no major surprise, but it underlines that people are primarily using social channels as a means of staying connected with their families, as opposed to a news source, as such - at least at this stage. Marketers, too, need to remain aware of this - people are not on social to be advertised to. You need to frame your ad efforts around this fact.

The second biggest use point for parents, according to Pew's analysis, was in information gathering, getting useful information from social and their social media networks. This is another important point for marketers - knowing that parents are seeking helpful information on social channels can help focus your marketing efforts. Instead of trying to sell them on functionality or price, sell them on utility instead, on how your products help. While much of this information gathering would be occurring within their networks (as opposed to from ads and marketing) it again underlines why parents are on social and what they're looking to get from those channels.

As it does in most social media use categories, Facebook is the most popular social media site amongst parents, with 74% of respondents indicating they're active on The Social Network. 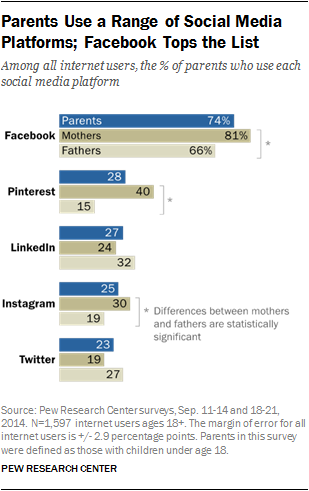 Interestingly, it's Pinterest that comes in second, with 28% of parents using the site - including 40% of mothers, clearly ahead of anything else, outside of Facebook. Pinterest is still not as widely used as the bigger networks, and the figures here suggest that marketers not utilizing the platform may be missing a trick. If you're not active on Pinterest, now's the time to start looking into it, with "Buyable Pins" coming into play to streamline the purchase process and the rising functionality of Guided Search. Clearly, the Pinterest experience is resonating with this audience subset - if you're looking to reach parents, Pinterest is a platform you definitely need to consider.

Stats like these can be of major benefit when trying to establish which platforms to be active on or which audience segments to target on each network. Being active on every platform is likely not necessary for every business - knowing where your audience is, specifically, can help you hone in on the right sources in order to maximize your marketing efforts.

To further contextualize this, Pew has also highlighted their findings by comparing social media usage stats among parents against non-parents. 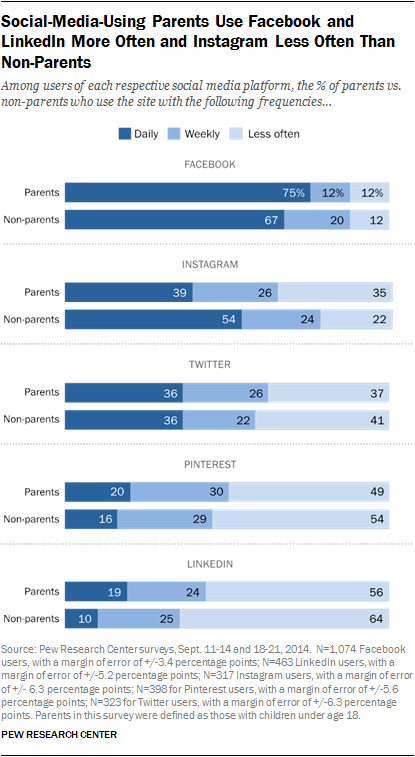 As you can see, parents are using Facebook more than non-parents, with 75% logging on daily (as opposed to 67% of non-parents), and 51% of them checking in with their Facebook community several times per day. Mothers on Facebook are more likely to check the platform repeatedly throughout the day, with 56% doing so, versus 43% of fathers. If mothers are your target market, the numbers indicate that Facebook is where you need to be.

But the standout difference between parents and non-parents is Instagram usage - 54% of non-parents are on Instagram daily, compared to 39% of parents. This is an interesting anomaly, and one which can't be easily explained, particularly as the similarly visual-focused Pinterest came in so high on overall usage rates amongst parents. The figures again underline the platform-specific nuances of each network - while Instagram and Pinterest do bear some similarities in their presentation, they are very different, and clearly, they're resonating with very different markets as a result.

Another interesting element of the Pew research was the data on the number of friends parents have on Facebook. Pew's data shows that the typical parent on has 150 Facebook connections, with family and friends making up the bulk of their networks (comparatively, the overall average is 350 friends per user, with 18-24 year olds averaging 649 connections). 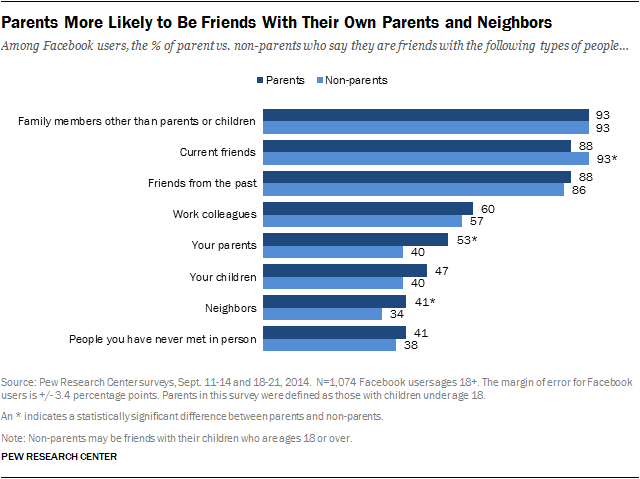 One of the most common reasons stated for the youth migration from Facebook (if that's happening or not) is the influx of parents and family members coming to the platform as a result of its growing popularity and ubiquity. The more parents are present, the more younger generations don't want to be, which is seen as a significant contributor to the growth of platforms like Instagram and Snapchat, and private messaging apps like Facebook Messenger. As that theory goes, the more mainstream a platform gets, the more the youth will turn away, meaning it's likely that we'll see similar migrations from those rising platforms in future - though reportage does suggest that the youth are not necessarily switching off from Facebook, they're just not using it as much as they had been previously. Pew's data somewhat supports this theory, showing that parents are connecting with family members, giving them connection to, but also oversight of, their recreational activities, as documented via Facebook.

The full "Parents and Social Media" report has a range of other findings and data to pour through (including data on concerns about social media and technology use), and is worth reading for anyone trying to get a handle on how social networks are being used amongst this market - or even in a more general sense, in understanding how and why people are using social platforms.