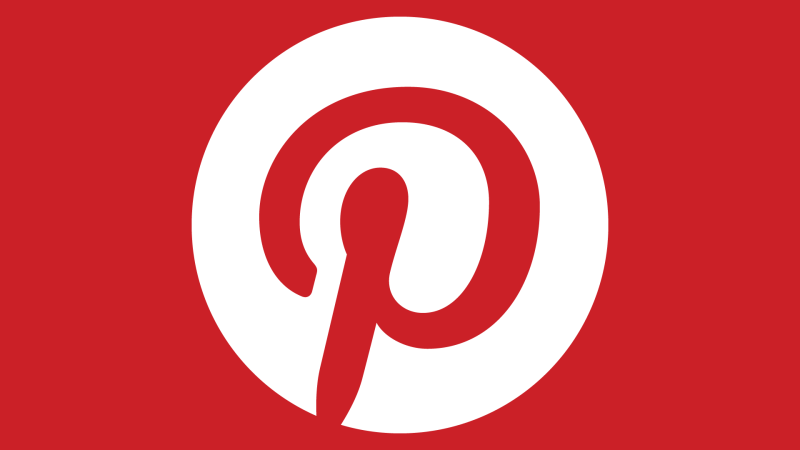 More people are actively pinning than ever before; Males are the fastest growing group on Pinterest; Almost three quarters of active pinners have bought something new they discovered on Pinterest.

These are just some of the range of insights documented in Ahalogy's "2015 Pinterest Media Consumption Study". The report, which takes in the perspectives of more than 1,000 online consumers who use Pinterest at least once per month, provides a wealth of valuable data on how people are using Pinterest, what types of content they're searching for and what demographic groups are most present. Such oversight is of significant benefit to those seeking to maximize their Pinterest presence, or for marketers considering their options with the platform.

Here are some of the key findings from the Ahalogy report:

Using this as a guide, the stats are broken up based on activity levels on the platform to provide greater transparency over the results. The first important finding of the research? Pinterest is still dominated by female users:

That said, male use has increased by 4% year-on-year, with almost 75% more male pinners now active on the site. Among active users (those using Pinterest once a month or more), the majority are aged between 25 and 34. 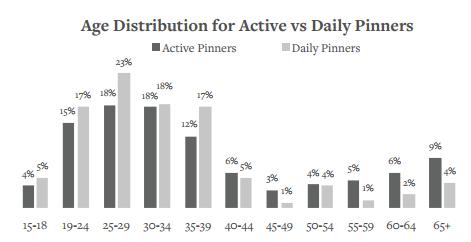 This makes sense - Pinterest is an aspirational platform, and when you're preparing for the arrival of your new baby, planning the baby's room and looking at all the baby-related products you want to buy can be a big part of that process. But once your kids are a bit older, and into toys and video games and cartoons, they're likely finding their own interests and telling you what they're interested in, so it becomes less about your choices for them and more about their interests, meaning less time spent researching on Pinterest. Also, once you have kids, your free time is significantly reduced - this may also play a part in the decline in use amongst those pinners who have children.

In terms of income, the majority of active Pinterest users have household incomes of less than $60k, but users in the $60k+ income category have grown the most over the past year. 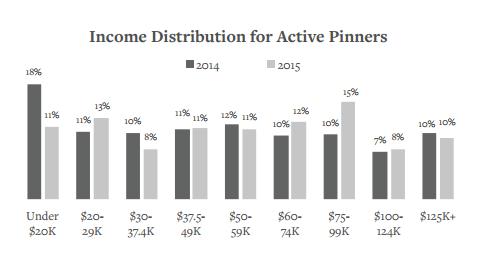 Ahalogy's figures show that men are the fastest growing segment on Pinterest. Active males have indicated that the most common reason they join Pinterest is because someone (a friend or spouse/partner) had specifically encouraged them to do so, though around 20% indicated they had joined Pinterest purely to follow or get more information about a specific brand.

In terms of purchases, "Fashion", "Exercise and Fitness" and "Food Products" ranked highest on the list of things male pinners were more likely to buy. 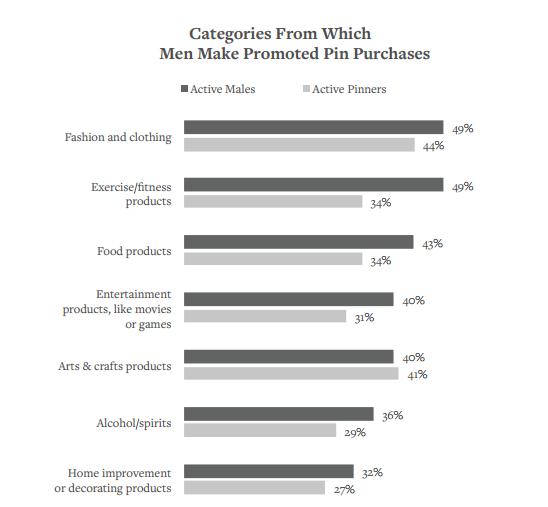 While men are still in the minority in active Pinterest use, it's interesting to see the growth in this demographic, and to examine how and why males have been turning to Pinterest, particularly in regard to following brands. Given the growth of male users, there's significant opportunity there for brands to focus their offerings to Pinterest and to make their customers aware of their Pinterest presence in order to get more male users across to the platform. The numbers show that there's a willingness for men to be present when they see reason to do so - for those looking to market to men via Pinterest, these are valuable insights into that audience. 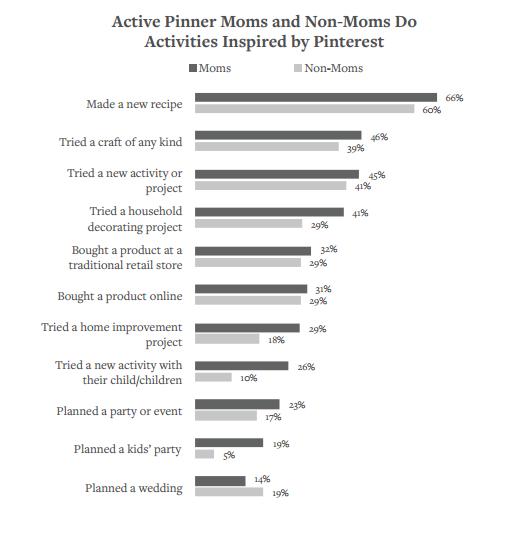 If you're marketing home decorating projects, it's worth taking note of these stats - focusing part of your efforts on projects targeted at active pinner Moms could be a big winner based on the activity figures among that user-base.

Among the top categories browsed by active pinners, "DIY and Crafts", "Food and Drink" and "Home Decor" all ranked above their home feeds. 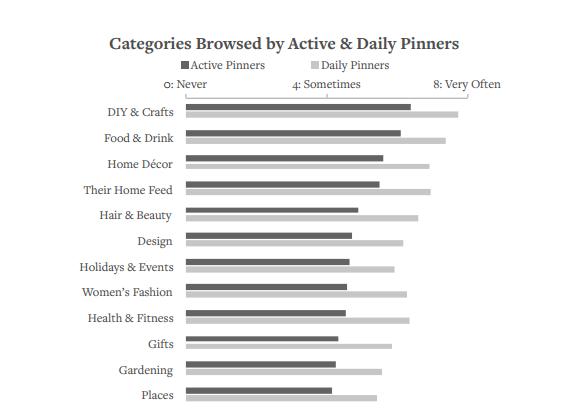 Active Pinners are spending 34 minutes per session on Pinterest. Also interesting is the data on how pinners are using Pinterest while in-store. 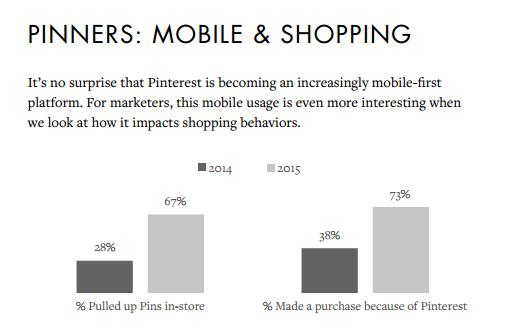 These behavioral data points are interesting and may help guide your Pinterest marketing decisions. The increased use of mobile is no surprise - we all know optimizing to mobile devices is a must in the modern social age - but the use of Pinterest while in-store, and the fact that users are more likely to browse and make purchases via mobile than desktop, are important considerations to keep in mind. Add to this the fact that 73% of active pinners have purchased a product because they saw it on Pinterest and you can see the potential of Pinterest marketing, and where that audience's attention is at within that process.

There's a range of further insights in the Ahalogy report, including data on UK and Canadian audiences specifically, and more insights into specific behaviors and habits amongst the different Pinterest user groups. If you're marketing on Pinterest, it's worth a look, there may be additional points of emphasis that stand out for your particular offerings.