Hey Brands - If You Don't Provide Social Media Customer Service, Someone Else Will do it For You

A viral story doing the rounds recently looked at how Facebook user Mike Melgaard was able to jump onto Target's official Facebook page and answer customer queries around the retailers' decision to phase out gender-specific signage and displays - with hilarious results. 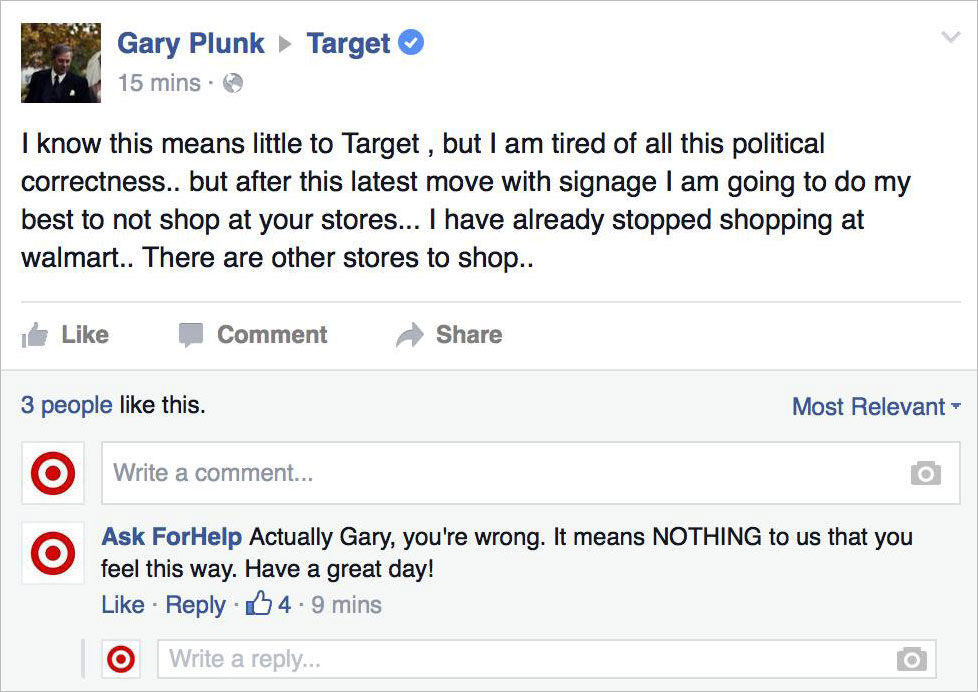 While Melgaard wasn't actually responding from Target's page, and was using a name that was clearly questionable (note the incorrect grammar in 'Ask ForHelp'), many users still believed he was, in fact, a representative of Target, and his responses were on behalf of the brand. 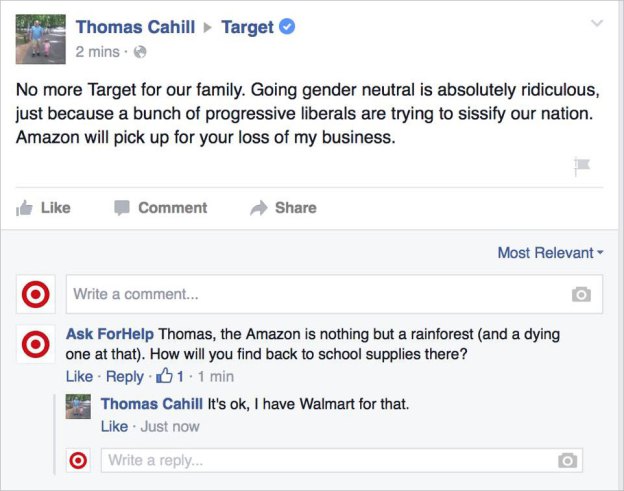 While Melgaard's interactions were, overall, pretty light-hearted and didn't cause any major impacts for the brand, the case highlights why organizations need to be paying attention to the conversation around their brand online. In this case, the fact that Melgaard was able to respond to queries in this manner for about 16 hours before being shut down shows that Target probably wasn't paying as much attention as it should have been to the discussion on its own Facebook page - there was no real damage done, but there could have been. And while it's understandable that a big brand like Target garners a lot of comments and discussion online, and tracking them all would be a difficult task, the fact remains - if brands aren't listening in and monitoring relevant mentions and discussions online, someone else will be. And that could be a big problem.

A Beme of Light

This issue has today been highlighted again, with a Twitter user staring up an account called @BemeHelp, using the official Beme logo and responding to user queries about the new 'moment sharing' social app, which was recently launched by YouTube identity Casey Neistat. 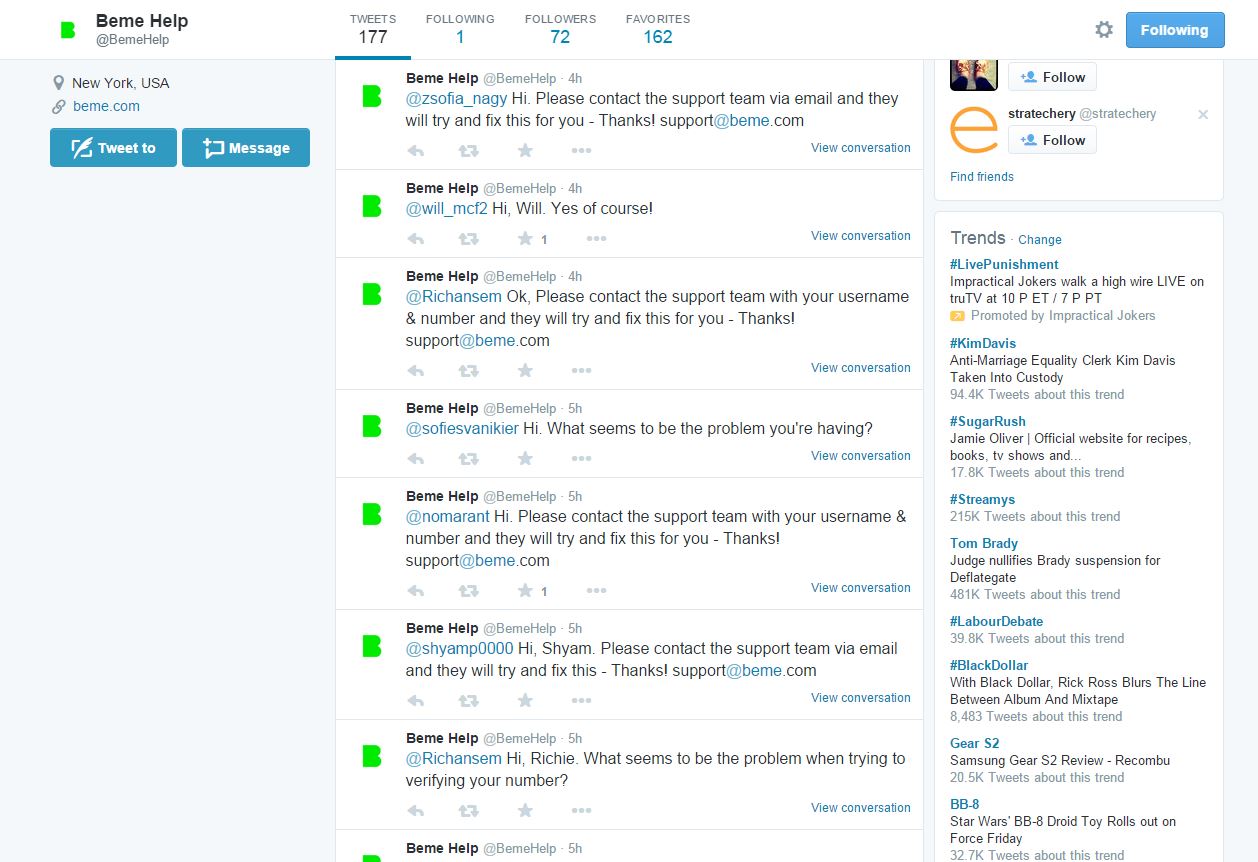 The problem here is, this handle has nothing to do with Beme. This is not an official account, it's not affiliated with Beme in any way, but users have been interacting with the handle as if it is. Similar to Melgaard's Target trolling, Beme's imposter has been relatively harmless - David Weiner, Beme's head of marketing and media, told The Wall Street Journal that:

"So far the information is quite accurate, although in a couple of cases the info is a bit outdated. It seems that whoever is behind the account cribbed from the support tweets we tweet out from our main account and they're attempting to apply that information to similar problems people report."

But the issue is it doesn't always go that way. Last year, Heinz was subject to a Twitter impersonation incident in which a user made jokes about how expensive their products were, and how little they cared about quality. Heinz eventually threatened legal action to shut down the account. Pace Salsa was also the subject of a well-publicized Twitter fake incident back in 2013. While neither incident lead to a wide scale shut down, they did impact on brand perception. And those impacts can be significant - in July 2014, an anti-coal activist in Australia tweeted out a fake press release that suggested a key investor in a Whitehaven Coal project was pulling it's funding. That announcement resulted in a temporary drop of $314 million in Whitehaven's market value. If social media misinformation can cause an impact of that scale, imagine what it could do to your brand if you weren't paying attention?

Social Media, however you look at it, is now a key source of information for the rising majority of consumers around the world. Numerous studies have underlined this, the increased connectivity of the modern age has given every consumer a whole new way to obtain information and evaluate purchase decisions in a more balanced and knowledgeable way. For this reason, it's crucial that brands maintain an awareness of what's being said about them online and how they're being discussed, to ensure they know what information inputs consumers are utilizing along their path to purchase. Even if your brand doesn't have fakes and trolls, it's still important to be listening in and staying informed of how your brand is being discussed and what people are saying about your offerings and services. You have more access to data of this type than ever before, failing to utilize it is failing, pure and simple.

It might not be the end of your business, you might not have pranksters responding on your behalf. But social media monitoring is a key tool, and a key way to stay informed of your community's concerns and queries, ensuring you're constantly in the loop.

And, as highlighted by the Beme incident, if people are looking for answers, someone is going to provide them. If it's not you, how can you know your brand is being represented in the best light?