Last month, Facebook launched a new post-level targeting functionality called Audience Optimization which enables Page managers to better define the audience for each update - which, in turn, should boost reach and response. The theory behind this is that each of your Facebook posts will only ever reach a certain percentage of your Page audience - Audience Optimization allows you to specify additional, specific interests related to each individual post so that the people you do reach with each update are more likely to respond, based on their noted interests. This should mean that, if you can get your targeting right, your posts will reach a more focused audience for each piece of content, and thus, your click-through and engagement rates should increase.

It's an interesting option, but it's also one that's not necessarily straight-forward or easy to understand - many Page owners I've spoken to have expressed interest in using Audience Optimization tools, but have no real understanding of how they could do so to best effect.

Facebook obviously anticipated this would be a problem, which is why, along with the launch, they published a 'Best Practices' guide for the tool, outlining some of the ways in which Audience Optimization could be utilized, including:

There are some great tips in the guide, but even then, the complexities of Audience Optimization can be difficult to grasp - and really, they need to be tested and trialled in order to narrow down each tag's effectiveness in relation to your, specific audience. For this reason, it's difficult to put a specific set of rules down on what will and won't work with Audience Optimization, it really comes down to your audience make-up.

That said, the only way to learn what works is to see how the tags are actually being used. We've been running a few tests with Audience Optimization with our posts to Social Media Today's Facebook Page to see whether they result in a boost for our on-platform engagement and referral traffic, trying out different approaches and ideas to see how these new interest tags might be applied. And while it is audience specific, and the comparison is not 'like-for-like' (you post the exact same thing twice and the results will likely be very different), here's what we've found so far.

So covering the big question first - using Audience Optimization has not helped us boost Facebook engagement per post, at least not in any significant way, as yet. I say 'as yet' because we're learning how they work - us not seeing a big uptick in reach or click-throughs is not necessarily a reflection of the effectiveness of the tool, but more highlights that we're still working out how to best utilize the option. Facebook did point out in their initial release notes that Audience Optimization wouldn't necessarily increase organic reach:

"In tests, we've seen that organic reach stays about the same while engagement goes up. Interest tags help Facebook better match content with audiences, prioritizing posts on particular topics for the users who are most likely to be interested in those topics."

So, in that sense, we shouldn't expect to see any sudden reach jumps based on adding additional interests - and as noted, we're still working out how best to use them - but these are the average reach results we've seen thus far in our limited test sample.

So as you can see, we're actually getting better reach, on average, when we don't use Audience Optimization tags - but as noted, it's probably not realistic to expect reach to improve, necessarily, as a result of this option, what you'd hope to see go up, ideally, is link clicks, as that would show that you're reaching a more focused, relevant audience with your content, people more likely to be interested in each post. So did that happen?

Again, we're getting more link clicks when we don't use Audience Optimization targeting, on average. But interestingly, 'Other clicks' is actually almost 10% higher when we use the new targeting options - this may suggest that we are, in fact, reaching a more interested audience, as they're clicking on and expanding the post at a higher rate, which likely means they are more interested in the content, but that's not resulting in higher click throughs. What this shows, I think, is that we are on the right track with Audience Optimization, it is reaching a more focused audience, but that we haven't quite mastered exactly how each audience responds and what tags to use to maximize each post's appeal.

So what sort of tags are we using? At first, the tags we used were pretty loose and directly linked to the wider interests of Social Media Today's audience. For example, here's the first post in which we used Audience Optimization and the resulting engagement we received based on those tags.

As you can see, the topics of 'Facebook', 'Social Media Marketing' and 'Facebook Features' aren't very specific - it's likely that most of Social Media Today's audience would be interested in these topics either way, so I'm probably not honing in the audience focus very much. The results here show that for this post (which was actually about the launch of Audience Optimization) more than 80% of the audience it was served to on Facebook shared an interest with one of these tags, with the vast majority sharing an interest in 'Facebook'. Again, even without targeting, you'd expect that most people who are fans of SMT would also be interested in Facebook, but then only a relatively small percentage of that audience had a registered interest in 'social media marketing' and 'Facebook features', so maybe it makes sense to solidify your reach with relevant tags.

You'll notice too that the 'Link Click Rate', 'Share Rate' and 'Like Rate' are all blank in this example - Audience Optimization will only show you these results on posts with an adequate number of clicks and engagements. The above post, for example, had 173 total clicks - whereas this one: 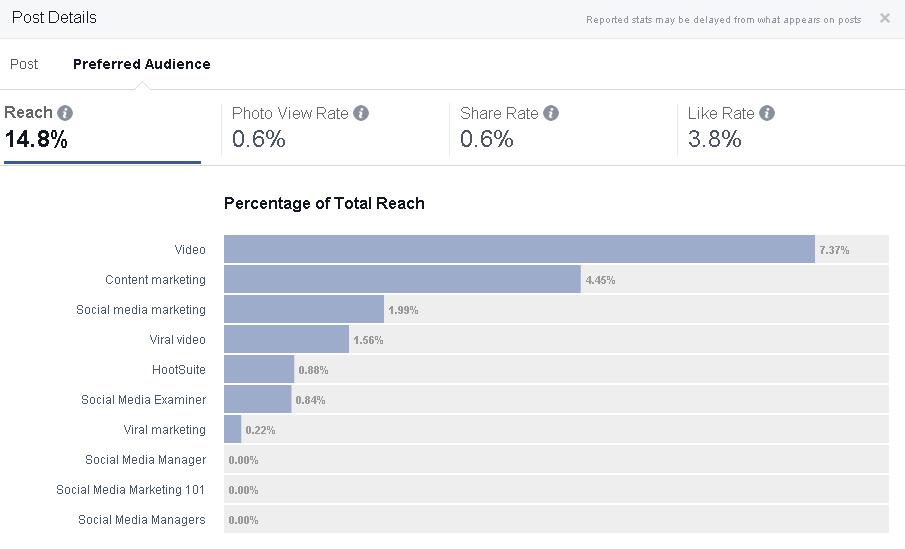 Had 2,100 total clicks and more engagement in the other categories (total shares and Likes), a bigger pool from which to draw relevant insights. This is one of the key limitations of these insights - according to Facebook, posts need to have more than 100 link clicks, shares or Likes, respectively, to generate meaningful stats in each category, though we've also found that to be somewhat inconsistent. For example, this post:

Had more than 100 shares, and as noted above, the first example had well over 100 link clicks, yet that click data isn't available. It's possible that this is all in development to a degree, which is why the data listings are not consistent, but worth noting that you won't always get all the relevant data, which can make it difficult to build accurate comparisons.

You'll notice in these examples the varying approaches we've taken to using AO tags. Facebook notes in their documentation that 6 to 10 tags have worked best for most posts, while the maximum you can use is 16. We've tried a variation, based directly on the content of each post, then based on similar interests - i.e. if someone is interested in social listening or social media marketing, it's pretty likely they'll also be interested in 'Hootsuite'. This is not targeting the audience of those other Pages, but it's considering what other interests your target recipients might have that could ensure your posts are reaching those who are most likely to engage with your content. So rather than saying 'this post is about social media monitoring' and using 'Social Media Monitoring' as a tag, we've tried to think of what people who are interested in that subject might also be interested in. This approach hasn't, overall, been more effective than generic topic targeting, but also not definitively worse - or again, at least not yet.

At this stage, I do think there's much benefit to be gleaned from AO tags, but we've not yet fully mastered their use, and Facebook appears to be still working out some final details of the system. At some point, AO tags are likely to be of significant value, but they may take more development (at FBs end) and study (at ours) to full realize that potential.

Either way, I do expect the positives of AO targeting to increase as both these elements develop.

And worth noting, we haven't begun testing out audience restrictions in any depth as yet, which is another, equally significant part of Audience Optimization. Exclusions requires a bit more analytical work on your audience, likely using Facebook's 'Audience Insights' and your own audience persona detail. 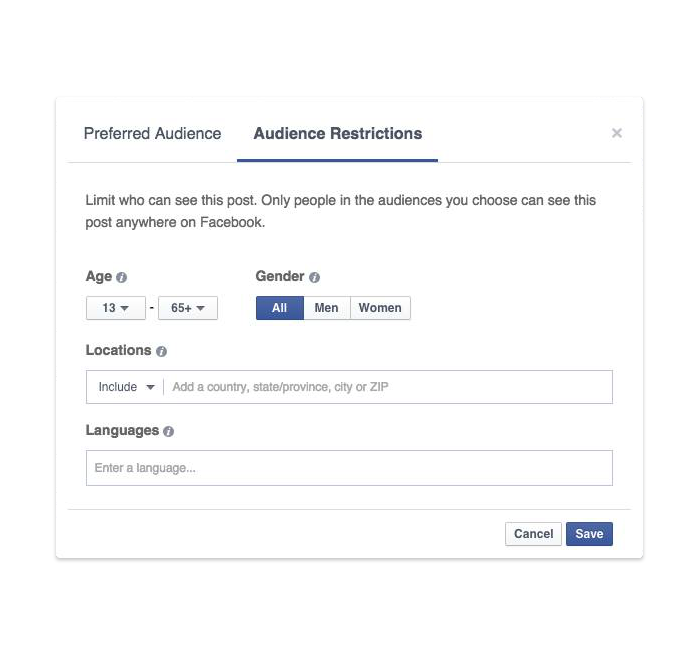 Overall, I do think there's great potential in Facebook's Audience Optimization tools, but that it may also take some time to fully realize and rationalize the functionality. I'd expect Facebook will be looking to refine this new system to make it easier to track and use, and that at some stage, AO targeting will become much more powerful. Till then, it'll come down to individual audience testing and experimentation to learn what works, and what doesn't work, for your audience and content. The framework is there for an effective targeting tool, but how much motivation Facebook has to improve it may be dependent on how many users are becoming Facebook ad users - if more people are paying for Facebook ads to increase reach, does Facebook really need, or want, to help you generate better content performance organically?

It's hard to know exactly how this new tool will evolve, and what results you'll see, but through experimentation and examining your Insights and analytical data, there will be ways to use it to best benefit. It'll just take some time to test and clarify, and see what results you get.