While LinkedIn sits in a unique position, being the dominant social media platform for professional search and career interactions, their Q4 and full-year results released today revealed some mixed results for the platform.

First, on use and engagement - LinkedIn reported that it now has over 414 million users worldwide, continuing its steady growth and outperforming the previous five quarters on this front. 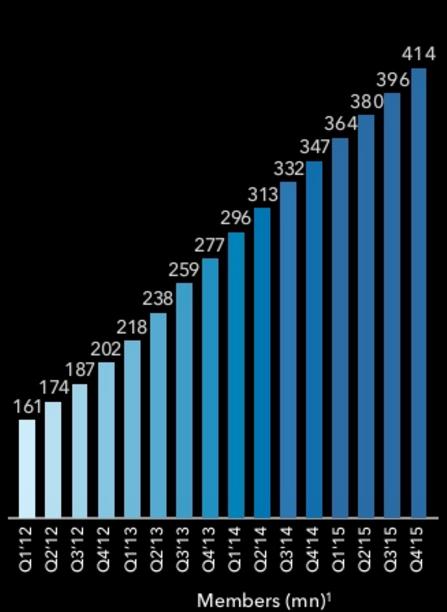 But that was the only good news on growth for the quarter - in terms of other engagement metrics, LinkedIn was flat on 'Unique Visiting Members' and down on 'Member Page Views'. 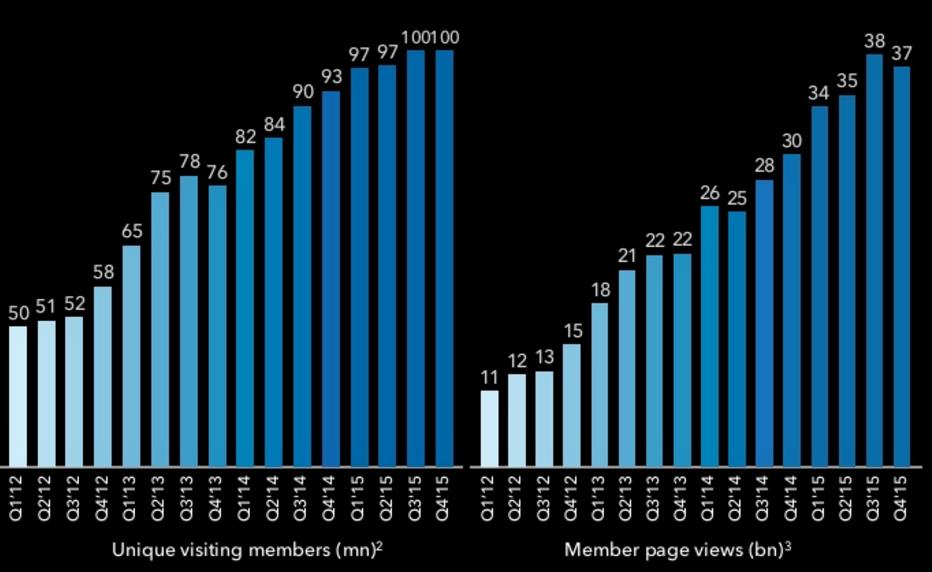 The latter is particularly relevant - as you can see from the above chart, LinkedIn has seen steady growth in Member Page Views, a strong indicator of engagement on the site, since 2012, with only one drop in that period (Q2 '14). In fact, in their last earnings report, LinkedIn recorded one of their biggest ever increases in page views (up to 38 billion), which may, in some way, soften the impact of a drop in this quarter. But still, any decrease in engagement is concerning, and no doubt the market will view such a decline with raised eyebrows.

For the full year, Member Page Views were up 35 billion on the previous (2014), and 61 billion on the year before that (2013), which underlines the platform's continued strength. But the latest decline will raise a flag as something to watch, heading into 2016.

In terms of revenue, LinkedIn posted a strong quarter, hitting $862 million in net revenue - up $82m on Q3. 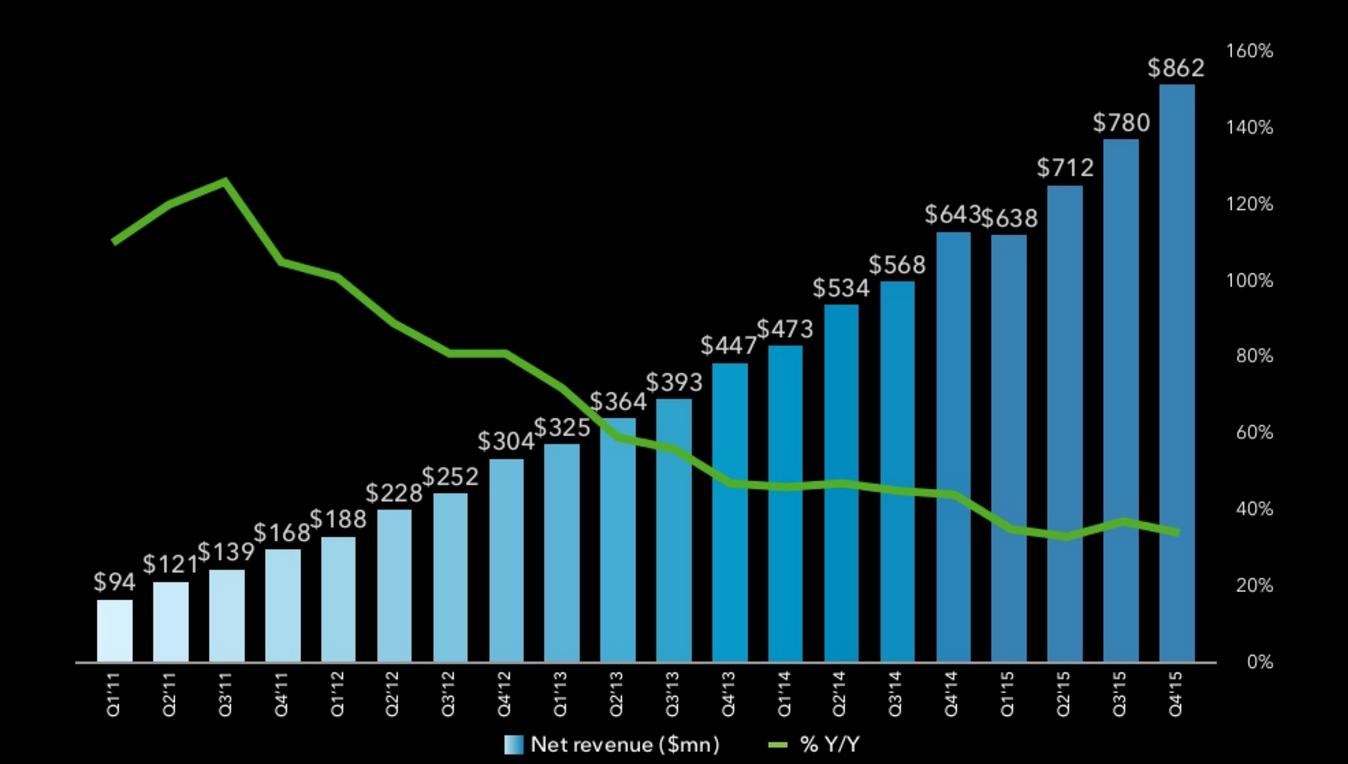 But despite that strong result, LinkedIn shares declined by as much as 28% in after-hours trading after the company reported weaker than anticipated guidance, saying they expect first-quarter earnings-per-share to come in at $0.55 - significantly lower than analyst expectations of $0.75. 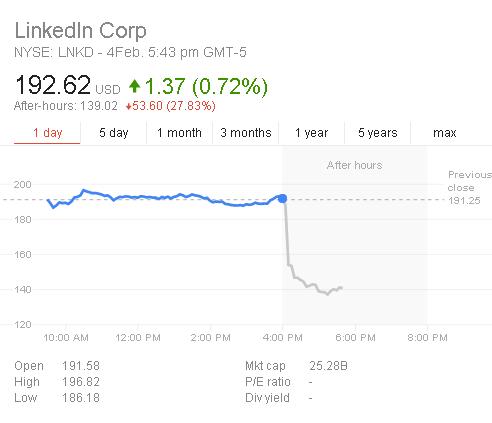 So why the lower forecast? Right now, there's no definitive word on the cause of LinkedIn's lower guidance, though you'd have to suspect that the lower engagement and on-platform interaction would be playing some part in LinkedIn's wider strategy and outlook for future growth.

"Our strategy in 2016 will increasingly focus on a narrower set of high value, high impact initiatives with the goal of strengthening and driving leverage across our entire portfolio of businesses. Our roadmap will be supported by greater emphasis on simplicity, prioritization, and ultimate ROI and investment impact."

Which seems pretty vague, there's no real, definitive answers provided as to why the company's forecasting such a significant decline in revenue expectation.

Weiner was far more detailed in his discussion of the Q4 results, talking up the platform's solid growth in mobile users - on the back of the release of their re-vamped mobile app - and increased interaction with content on the platform (as opposed to the aforementioned profile visits):

"Mobile in particular grew three times faster than overall member activity and now represents 57% of all traffic to LinkedIn. We are also seeing members significantly increase the amount of content they interact with in the Feed, thanks to improved algorithms and easier tools to follow publishers. The year-over-year growth rate for members sharing content has nearly doubled since launching the new Flagship app, accelerating to nearly 40% year-over-year. And some third-party publishers are seeing materially increased traffic coming from LinkedIn - in some cases greater than 3x previous levels. The early accelerated traffic trends are particularly noteworthy given our 2015 emphasis on quality versus quantity of email sent by LinkedIn to members. We've reduced the number of emails sent on a per member basis by 40% - a worthwhile trade-off aligned with our long-term strategy to create the best possible member experience."

A key point to note - 57% of all LinkedIn traffic now mobile - worth considering for those looking to use the platform for marketing purposes.

LinkedIn's CFO Steve Sordello said the lower guidance is reflective of continued pressure in international markets, impacted by global economic conditions. Again, not particularly specific, but it does give some indication behind the lower numbers.

One point of particular interest among the LinkedIn results discussion, and the reasoning behind the lower than expected estimates, was the projected decline in revenue from LinkedIn's Talent Solutions arm - essentially the recruitment element of the platform. Growth in Talent Solutions has been downgraded to the 'mid-20%' mark, well lower than its previous rate of expansion, which is surprising, considering the ways in which LinkedIn's looking to evolve it's recruitment and job placement solutions, utilising its unmatched database of professional histories and career insights.

That approach was actually re-enforced within the Q4 announcement itself, with LinkedIn noting that it had acquired Connectifier, a tech startup which uses artificial intelligence to find better job matches and candidates - an area where, if perfected, LinkedIn could transform the recruitment process as we know it.

As per LinkedIn's release:

This is an area where LinkedIn could have a major impact, and one which could generate significant revenue for the company moving forward. Once developed, LinkedIn would be able to use the data from its 414 million members to create complex linkages and correlations that would better match each individual user to the job and career path best suited to them, based on skills, expected opportunities, career longevity and any range of other, additional factors. With that level of insight, LinkedIn would, essentially, be able to assess the traits and interests of anyone and highlight a path to their ideal career, even if they don't know it themselves. The building blocks for such a system are already in place, and acquisitions like Connectifier will move them closer to this being a reality.

Overall, it's a fairly mixed result for LinkedIn. While the stock has lost some shine, there's still a lot of positive signs, though the platform will have to work hard to highlight those opportunities and potential benefits to get their numbers back on track.