Consumers Expect Promotions, Responses and 'Holiday Cheer' on Social over the Holidays [Report]

Have you got your holiday social media marketing strategy locked down? The time is fast approaching, so if you haven't, it's time to get moving.

If you're looking for a bit of last-minute inspiration or guidance Sprout Social have released a new report which looks what consumers expect from brands on social over the holidays - and with social media now influencing holiday purchases for one in three Americans, understanding how to best capitalize on this element is essential to maximizing your results.

Sprout's Q4 Index report is the result of an analysis of over 3.6 billion inbound and outbound social messages from 15 industries across Facebook, Twitter and Instagram, as well as a survey of more than 1,008 online respondents. And the results provide some interesting food for thought - here are some of their key findings.

First off, Sprout's research team found that while overly-promotional tweets annoy consumers year-round, their feelings change during the holidays, when they instead turn to brands for guidance. 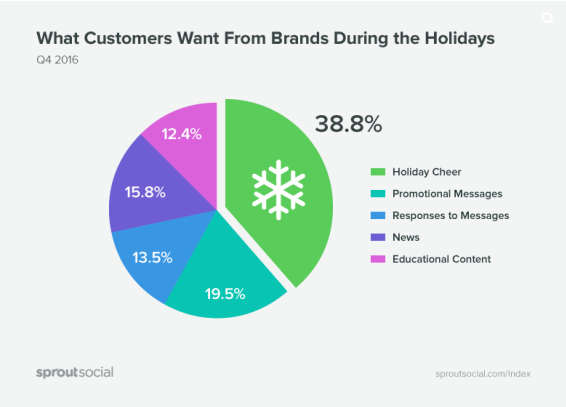 Time to break out the Ho-Ho-Ho's.

Given the increase in shopping activity in the period, it makes sense that more people are looking for deals and bargains, and it equally makes sense to align with this trend.

Sprout also found that around 1 in 7 people are specifically looking for responses to customer service inquires on social during the holidays, while consumers are also 50% more likely to get a response from a retailer than they are from another type of business. That's worth noting - if consumers are regularly getting timely responses to their queries from other providers, that increases the expectation that your brand will also be able to provide the same.

Worth noting too that more retailers respond to tweets than they do to Facebook posts. 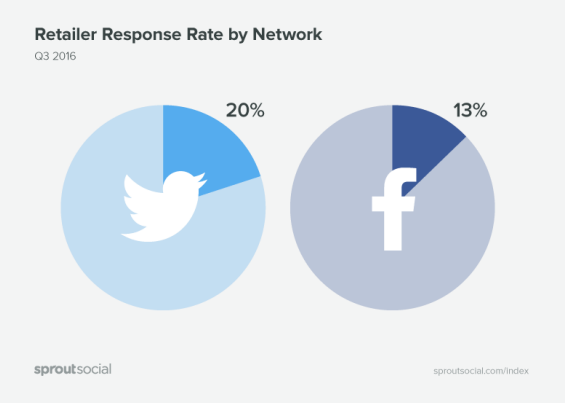 Now, that could be because a lot of Facebook comments are people tagging their friends or that they're just that - comments which don't require a response. On Twitter, the immediacy of the network boosts the consumer expectation for a response, and the public nature of tweets also provides people with a platform to demand action, because everyone can see it.

One average, according to Sprout's data, customers will be waiting eleven hours to receive a response to their social queries, either on Facebook or Twitter. This shows that we still have some way to go in capitalizing on the opportunities of social customer service.

In addition to this, Sprout's research team also looked at the average performance benchmarks by industry, ranking them on various metrics, including 'Average Response Rate', 'Average Response Time' and 'Posts per Replies' (how many promotional messages brands publish compared to how many responses they give to their audience). 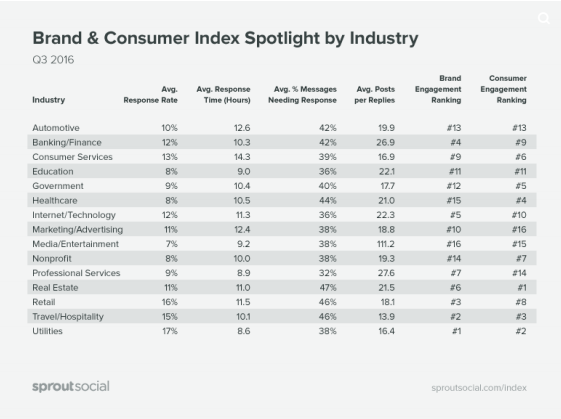 This might help provide some context when establishing your own benchmarks and measuring your brand's performance.

The full report also includes data on message volume and response and how brands are engaging with consumers who are looking for more information in the holiday period. It's a good read and worth having a look over as you go about finalizing your holiday plan.