Virtual reality is going to be a key topic of discussion in social media circles in 2017, even though full VR adoption is going to take some time to come into effect.

The focus makes sense - virtual reality is the next level in interactive technology, the closest thing we can get to a shared experience, to viewing the world through from another person's perspective. Throughout history, people have always gravitated to the most engaging communicative medium of the time, be it spoken word storytelling, writing, photos or videos. VR takes that to the next level, where you'll be able to interact and engage within a digital space - but how will people actually respond to social interaction in such an environment?

To get some perspective on this, Facebook recently commissioned Neurons Inc, an applied neuroscience company, to conduct a study into people's ability to engage and connect in VR. Neurons examined the responses of 60 participants who each took part in a one-on-one conversation within a VR environment, simulated inside an Oculus Rift headset. The participants hadn't met, and Neurons used EEG brain scanners and eye trackers to assess how people reacted emotionally and unconsciously to the interaction.

The study revealed some interesting findings - here are some of the key notes.

First off, the data showed that participants "expressed consistently positive motivation levels and demonstrated cognitive effort levels that decreased over time". In basic terms, the participants were comfortable and increasingly engaged in the conversation as the discussion went on.

The EEG data also showed that participants, on average, were in the 'ideal zone for remembering and processing information' 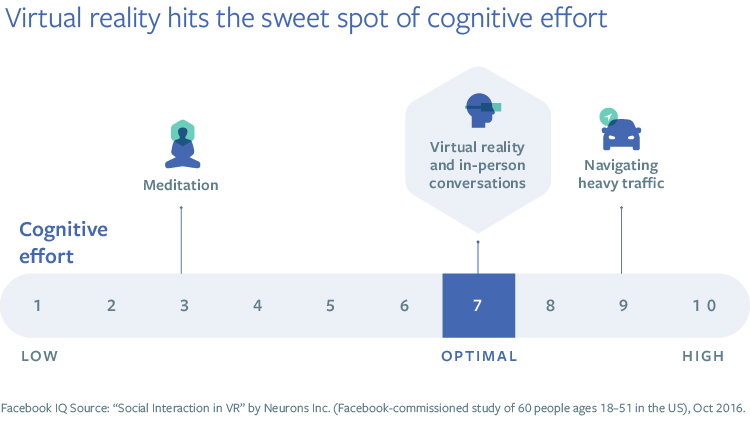 And another indicator of comfort - the conversations, on average, latest for 20 minutes, but participants, when asked to estimate how long they'd been talking, guessed the sessions had gone for around 13 minutes.

These are interesting findings, for sure, and they show that people can, and will, feel comfortable within a VR environment for social interaction - but Neurons' extended discoveries reveal some far more interesting implications for the future of VR interaction.

After completing a short survey, each participant was noted as either more introverted or extraverted by nature.

That's important - various academic studies have shown that introverts account for around a third to half of the population at any given time, although extroverts, by nature, seem more prominent. This is also reflected in social media, with extroverts more likely to post more often, highlighting their interactions and achievements. But if VR interaction can also cater to that less active group and encourage more engagement from more people, that'll make it a more universally appealing platform, a more inclusive medium to enable greater connection.

As noted by one of the study participants:

Imagine if you could have all the regular benefits of face-to-face communication but without the self-consciousness of how your hair looks or what others might think. There are significant benefits to this process, if, as highlighted in this study, the connective capacity is similar to regular person-to-person levels.

In addition to connective capacity, in a separate study conducted back in 2015, Facebook found that people are already looking forward to using VR in many different ways, including for shopping, entertainment and work. 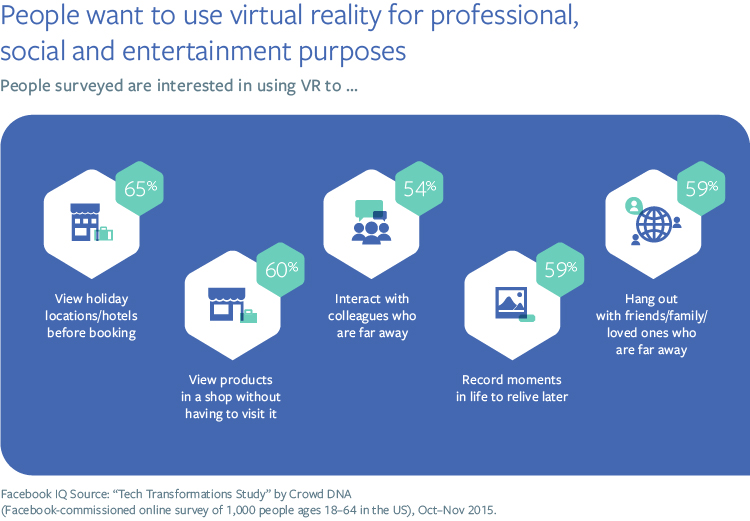 This is where Facebook sees major opportunity - but as noted, full, transformative VR adoption is still a way off, with price and availability still significant barriers in the market.

This is why we're likely to see more 'stepping stone' type technologies, like 360 video, which Facebook recently announced as part of Facebook Live - and as such, it's worth brands considering how they can utilize these newer options as a lead-in to the wider VR shift.

Already brands like AirBnB are using live 360 video to showcase their products.

Join us in London! Jump into an Airbnb experience on #Periscope360. Just move your phone around and see what happen... https://t.co/z1bFRV9q1u

That application makes perfect sense - being able to explore a room before making a booking adds a whole new element to the process, as does NextVR's partnership with the NBA to broadcast games in 360 degrees.

Such applications are a sign of what's to come, and the brands that can adapt and utilize these technologies to enhance the customer experience have a great opportunity to both stand out as leaders and move forward with innovation, rather than being left behind.

There's no rush, necessarily, it'll take some time before we're all conducting regular business in VR. But the change is coming, and it's worth considering how your business can utilize these new options to build better, more immersive customer journeys.