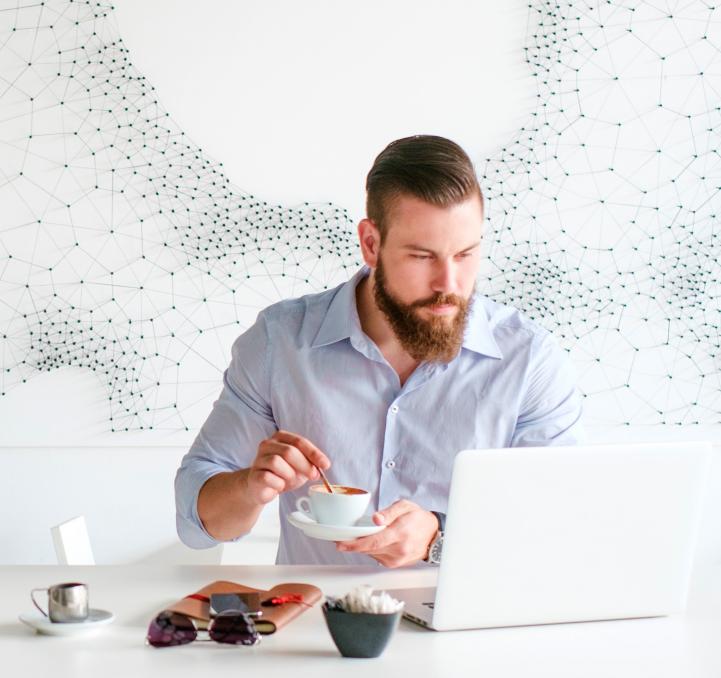 Does ad exposure increase a user's propensity to then conduct a search for your product, even if they don't necessarily click on your ad? This is a question Facebook's sought to address in a new study which examines how Facebook ads impact search behavior off the platform - and subsequently lead, indirectly, to conversion. The research works to underline the wider impact of Facebook ads and social ROI - one of the big focal points for social media marketing in 2016 will be further advancements on transparency and the actual impact of social marketing efforts on the bottom line. Measuring definitive ROI from social has long been a sore point, but more options and tools are being made available to provide a clearer link between social and sales.

So how do Facebook ads contribute to search activity? Facebook's provided some in-depth stats, taken from 23 conversion lift studies based on campaigns run by advertisers in the eCommerce, retail, automotive, travel, finance services, education, technology, telecommunications and automotive sectors. Here's what they found.

To get an accurate measure of the impact Facebook ads have on search, Facebook divided their test group into two categories - one which was exposed to Facebook ads and one which was not - then measured their subsequent search and conversion behavior: 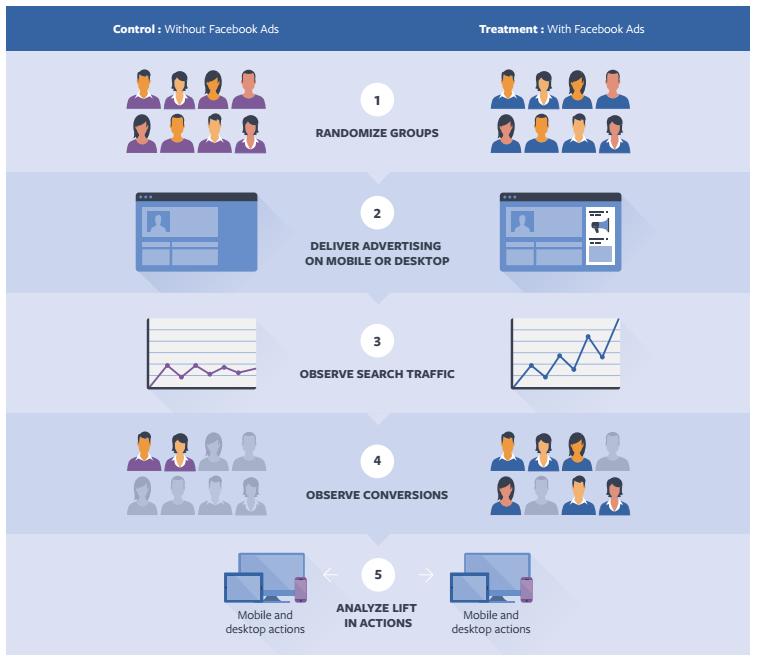 That's a pretty straight-forward methodology, but there are some unique qualifiers in there - for instance, Facebook found that of the campaigns they studied, 70% of people were reached on mobile only, 18% on desktop only and 10% on both devices. Such a clear weighting towards mobile no doubt influences the final stats - Facebook also found that the volume of people conducting searches was lower on mobile (37%) than it was for desktop (63%). That means that while mobile users were seeing a lot more of the Facebook ad content, not as many of them were conducting searches on mobile devices, and that finding does alter the perception of the final results. Nevertheless, the numbers are indicative of a wider trend towards mobile, and provide some interesting pointers on that front.

What Facebook found was that exposure to Facebook ads lead to a 6.3% average lift in mobile search traffic. 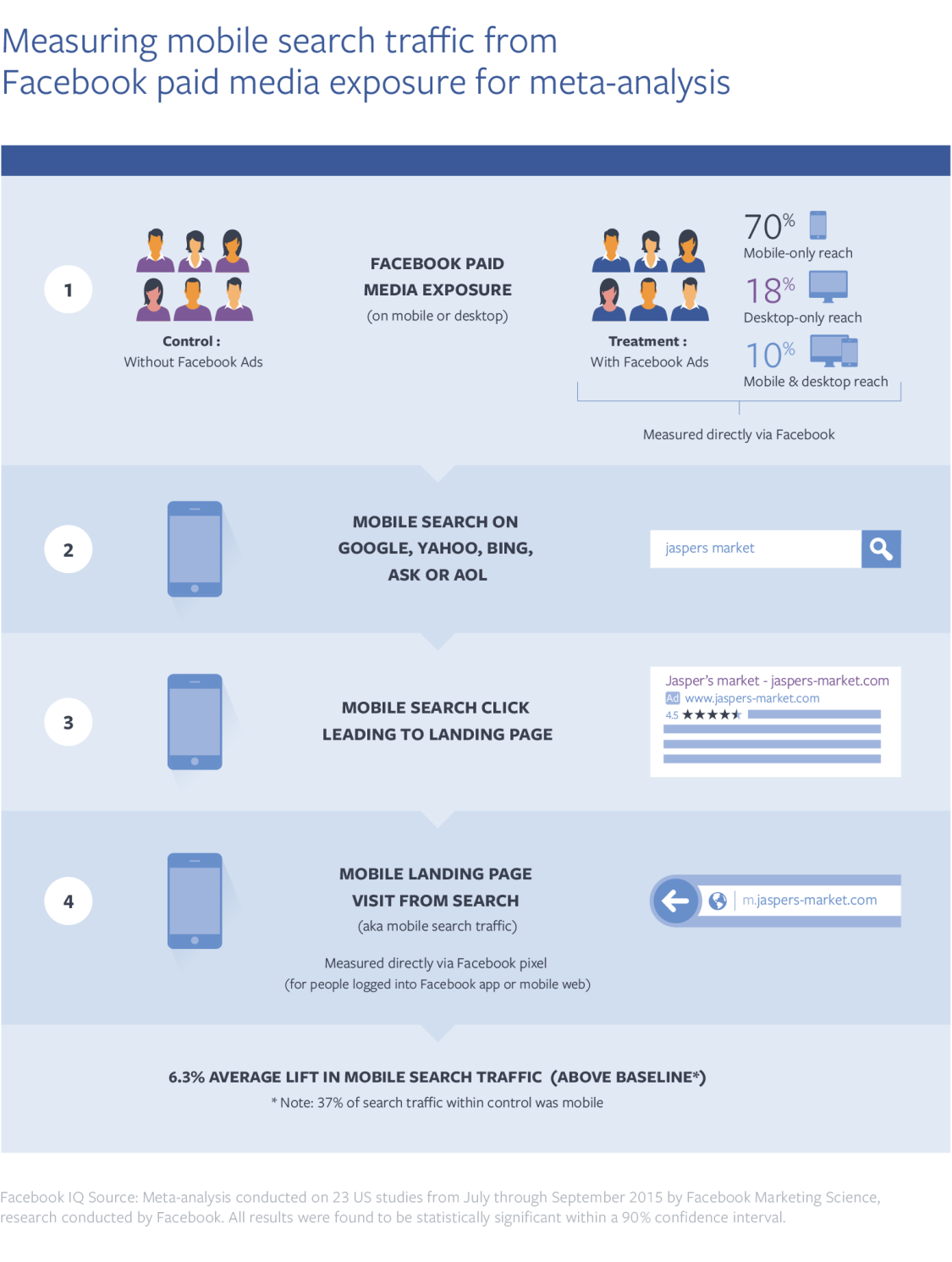 "Through our meta-analysis of 23 US studies, we saw that roughly a quarter of the campaigns showed a statistically significant lift in search referral traffic. In addition to higher volume and more efficient traffic, we also saw an increase in lower-funnel conversions."

Campaigns from small businesses had the most significant variance in lift, which, Facebook says, could be due to their "relatively low volume of natural conversions". 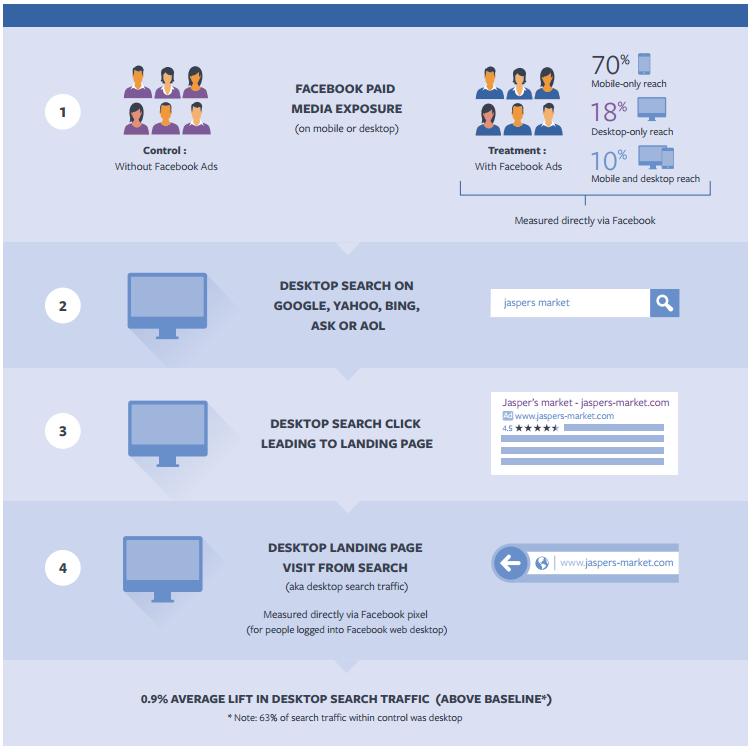 Given that the majority of searches in the study (63%) were conducted on desktop, the findings don't seem to bear significant impact, right? But here's the thing, as noted by Facebook in their notes:

"Consumers have shifted to mobile, Facebook ad delivery is now predominately mobile and we've seen that the resulting lift in search behavior from Facebook paid media exposure is disproportionately higher on mobile on average."

That is important - even in a smaller sample size, the impact of Facebook ads on mobile search behavior shows a significant enough increase for brands to be paying attention to the findings. And that variance may become more important over time.

Facebook's constantly talking about the importance of the mobile shift. They're running a whole series of studies on it, data which explains how 'the thumb is in charge', how all brands need to be paying attention to the rising use of mobile devices in their consumer pathways. And they're right - mobile is most definitely taking over, various studies have shown that mobile web access is quickly gaining on desktop, even surpassing it in many aspects. But possibly the most important data on this front, in regards to this latest research report from Facebook, comes from Google, who earlier this year announced that more Google searches now take place on mobile devices than on computers in 10 countries, including the US and Japan.

That change is very significant in the context of this report - even if the sample size is smaller, and the figures show that more people in the research group conducted searches via desktop, the trends indicate that more and more people are searching via mobile. And Facebook ads on mobile lead to a 6.3% lift in related search activity.

Understanding the why of that result is obviously key to getting your head around how that works, and whether that finding is relevant for your brand - Facebook notes that:

"...this could perhaps be a function of how people navigate to a page on mobile, by beginning with a tap on their search app rather than on a mobile browser."

And that's where the real gold of this data lies - finding a trend like this obviously bears further research, but it's in understanding the 'why' and 'how' behind the numbers that will offer real insight. Could it be that people are conducting more related searches because it's easier to highlight a term, cut it, then paste it into search on mobile, as opposed to writing out a related search on desktop? Could it be that people have a higher propensity to search for Facebook ad related terms on mobile because they're using it in store while shopping, or when they're in transit, so they have more free time to check out products they might be interested in? Unfortunately, Facebook's data isn't able to provide full oversight of such details, but it does raise some interesting questions.

To further underline their data, Facebook's also provided some industry-specific examples, showcasing some of the more impressive results, including this chart based on analysis of a campaign by Experian. 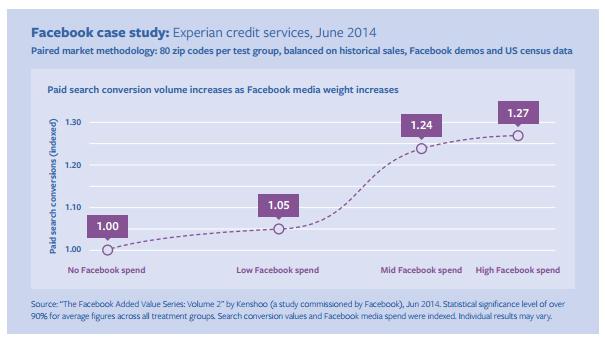 There's definitely something in that, it's clearly an area where relevant gains can be made, but the report itself acts as more of a flag than a guide - it highlights where brands should be looking but not exactly what those findings mean. That makes sense - each business is going to have different results based on their own campaigns and audience, but the findings do demand attention.

Could Facebook ads lead to a boost in attention for your business via Facebook and via search? The numbers show they could, but you'll need to conduct your own research to discover the full extent of that impact for your brand.