Twitter's continuing on its path of paring back as it seeks to re-align the business on the products and offerings that matter most. Their latest move on this front is relatively small, but significant for many advertisers - they've announced the removal of lead generation campaigns and cards as an advertising option.

While Lead Gen ads are not clearly delivering the results Twitter would like, many brands have utilized the option over the years. 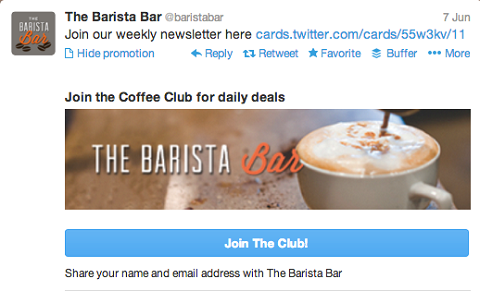 As you can see, the format enables brands to create a promotional tweet which is attached to a card, enabling viewers to quickly and easily share their contact info via the call to action button without leaving the app. When the button is clicked, their name, @username, and email address are automatically pre-filled within the Card.

The option has been particularly popular for brands looking to grow their e-mail lists via tweet - though evidently, not popular enough.

The change will likely see more businesses revert to Facebook for the same, though Facebook's ad targeting is different and more restrictive for some purposes. For example, on Twitter you're able to target followers of your competitors, trade associations and thought leaders in different industries. Facebook's demographic targeting doesn't include the same options, which may reduce overall effectiveness. LinkedIn ads too are an option to consider, though the lead generation options available are not the same.

As noted in Twitter's post, it'll no longer be possible to create lead generation ads as of February, and no longer possible to view them from March.

Be sure you take note and factor in the change in your 2017 plans.