Twitter has released their latest Transparency Report, highlighting the amount of removal requests, takedown notices and copyright infringements the micro-blog platform handled throughout the second half of 2015. And the numbers highlight a change in the emphasis that legal teams and government organizations are putting on tweet content - and likely the wider shift towards social media becoming a more recognized and influential part of the media overall, with significant increases in all aspects of Twitter's report. Here are the details.

Information requests are legal requests Twitter has received for account information "typically in connection with criminal investigations". In the second half of 2015, Twitter saw a 27% increase in such submissions.

The largest amount of information requests came from the U.S., with 2,673 queries (48% of the total requests received), followed by France (707) and Japan (445). In the case of France, which saw a 400% increase in requests compared against the last reporting period, Twitter says the higher number "is likely attributable to the string of terror attacks in France during 2015, particularly the November Paris attacks".

The increase in research via social content, particularly in relation to criminal investigations, highlights the rising importance of social interactions and the data insights they can provide. It's a difficult balance for tech companies to maintain, as exemplified by the recent Apple vs. FBI case, but it does demonstrate the heightened relevance of social media in our wider interactive landscape, whilse also signaling the next legal battleground, where questions over the very definition of privacy - and who holds the rights to it - will continue to be debated. 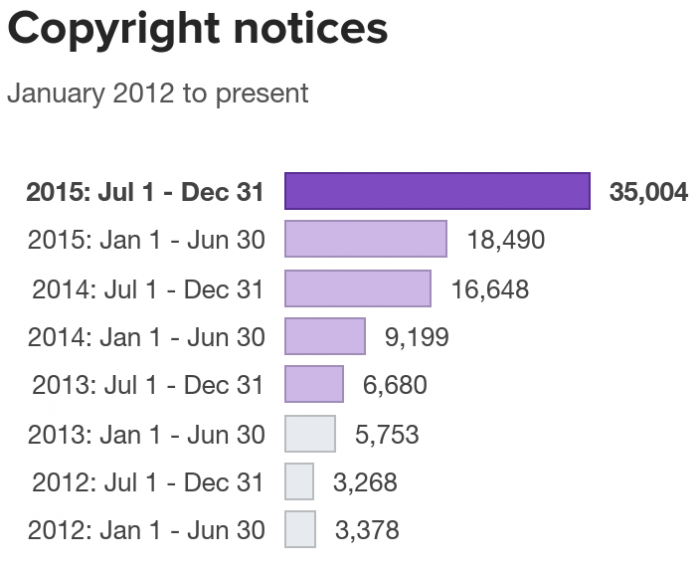 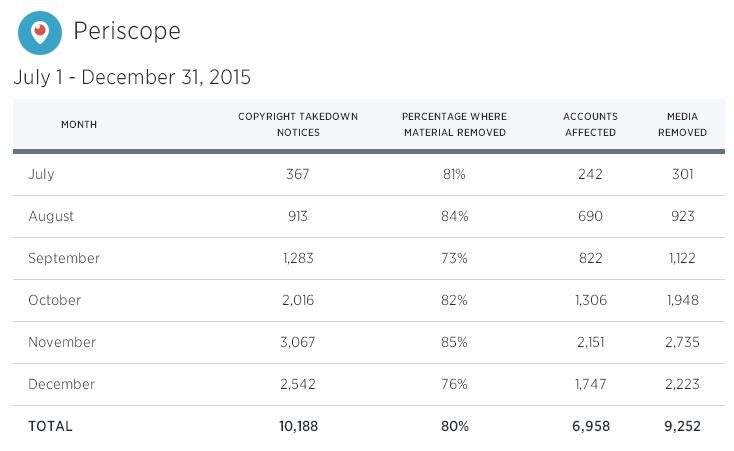 That's less than Twitter overall, which was the focus of more than 19,000 takedown requests, but given the comparative size (Twitter has 100 million daily active users, compared to Periscope's 2 million), Periscope's percentage of requests versus use is significantly higher. Periscope also saw the most copyright requests upheld, with Twitter enforcing removals in 80% of the cases raised (71% of the cases related to content on Twitter itself were upheld). Given reports of fans live-streaming pay-per-view events and TV show premieres, this is a significant area of concern for live-stream providers, particularly as the popularity of the option grows.

The majority of copyright infringement requests were brought by IP protection groups like NetResult and Remove Your Media which, combined, brought 33% of overall takedown notices. They were followed by sporting organizations and rights holders, including Digiturk (enforcing Turkish Super League soccer), Athletia Sports and Zuffa LLC (which represents UFC among others). 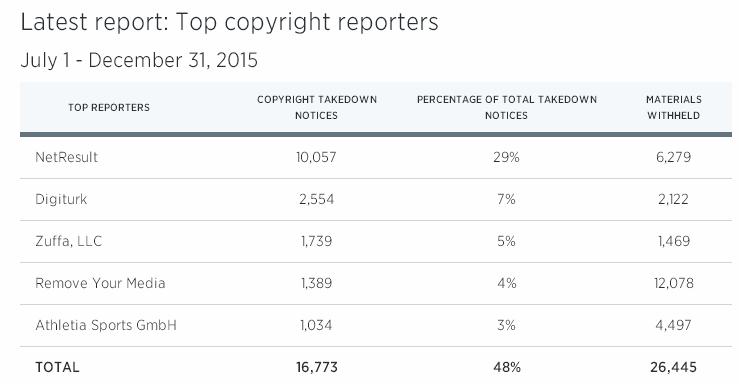 Again, this is largely reflective of the changing content landscape, and how providers are working to deal with these new technologies and the increased connective capacity of consumers. Broadcasters pay top dollar to get exclusive rights to major events, and protecting that exclusivity is becoming increasingly difficult. It'll be interesting to see how the International Olympic Committee - well known for being highly active in enforcing the rights to Olympic content - look to tackle such concerns during the upcoming Rio Games.

Either way, an almost 100% increase in copyright infringement notices shows that social is an evolving battleground for rights holders.

Removal requests relate to issues where governments and other authorized bodies have called upon Twitter to remove or withhold content - this generally applies to content that's illegal in certain regions but not others (for example, defamatory statements). Twitter's also now including content removed due to Terms of Service violations in this section.

Overall, Twitter saw a 455% increase in removal requests, however the addition of TOS violations does alter the data totals, making comparison to the previous period inaccurate.

The majority of removal requests came from Turkey (1761), Russia (1,729) and France (150). Twitter broke down some of the logic behind these removals in a separate section to give further context behind why content might be removed under these regulations. 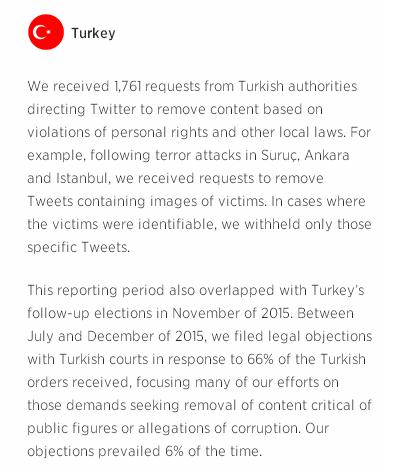 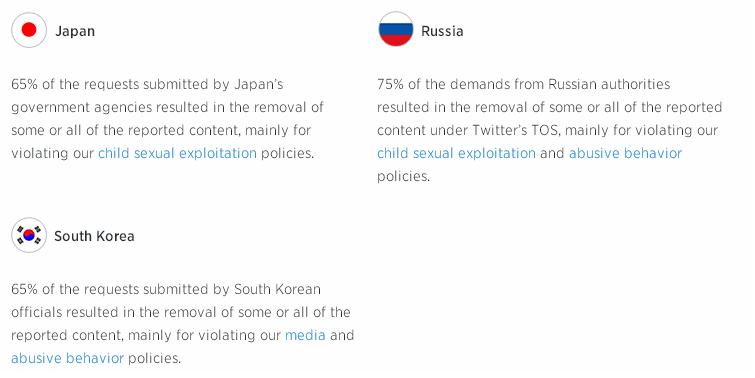 Overall, Twitter's Transparency Report highlights the ever more complicated legal boundaries coming into play as more of our interactions are played out online, and more people are given more capacity to connect and access content. We're also seeing significant increases in the attention being paid to social platforms on this front - that makes sense, more people spending their time on social media means more emphasis on the medium in general, but it also underlines the rising importance of social and the increasingly significant role it's playing in our everyday lives.

As yet, many legal devices haven't evolved fast enough to keep up with the new digital landscape, but the fact that platforms like Twitter are willing to be transparent about how they deal with such issues is a positive step, and may go some way towards leading us towards both improved understanding and improved provisions to better safeguard users online.