Here's another interesting event integration from Facebook. Following on from the recent Star Trek Reactions (which, as an aside, annoyed some Star Trek fans because the emotionless Spock represented the "Wow" response), The Social Network has today unveiled a new emoji response option to help users celebrate International Day of Peace. 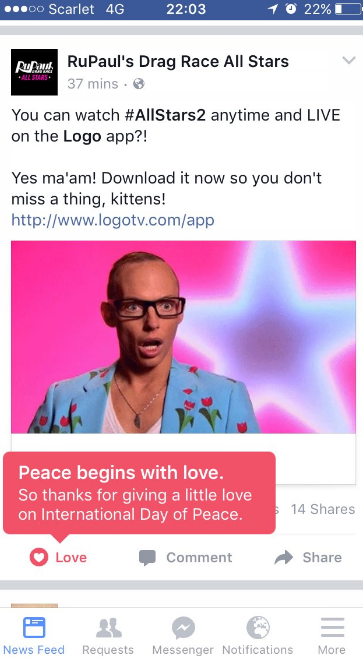 If you click on the "Love" Reaction, those tiny hearts will burst across the screen in a shower of joy.

The option should be available for all users, though many have reported not seeing it when they click. One potential problem could be time zone crossover - the function is likely triggered by date, which means that anyone on the opposite side of the International Date Line to America, where Facebook is based, has likely already missed out on being able to use it (I'm in Australia and I'm not seeing it on desktop or mobile).'

Technical issues aside, it's another interesting promotional option for Facebook - thus far, they've only used the customized Reactions and this new option to mark significant events, not for paid marketing purposes. But both of them could become ad options - they'd likely be higher end ones, for sure, but you can imagine that brands would be keen to have a Reactions set tied into their new film release or an exploding emoji linked to a new product launch.

It's not something Facebook has indicated they're looking at, but they are options they could consider. In itself, it's great to see Facebook mark such a significant and important celebration, but in the wider scheme, it's interesting to consider how Facebook could further diversify their ad suite with new integrations and tools like this.

And considering Reactions is yet to gain significant traction with users, such options could also help shine a spotlight on Reactions use, which, if adopted, could give Facebook a whole new set of user data to improve their ad targeting.