Facebook's Adding a Dislike Button to Messenger. Kind of.

Back in 2015, Facebook CEO Mark Zuckerberg sparked a surge of excitement by suggesting, during a Town Hall Q and A session, that a much requested 'dislike' option could soon be coming for Facebook.

The 'dislike' is the most requested Facebook addition of all-time, a quick and easy way to register opposition to a post or comment. Except, Zuckerberg wasn't actually talking about a dislike, as such - he was talking about 'Reactions', Facebook's emoji-like responses that enable users to share a wider range emotional responses, which were then launched shortly after his comments. Without a 'dislike' option.

Of course, the lack of a 'dislike' Reaction sparked a new wave of requests for the feature, but Facebook has avoided adding a dislike for various reasons - Zuckerberg has noted that a dislike button would not be "socially very valuable or good for the community", which is similar to the line Facebook has taken over time, that a 'dislike' is intrinsically negative and not conducive to interaction and sharing.

But as reported by TechCrunch recently, they may soon be adding a dislike-esque option - though not in Facebook, but in Messenger instead.

As you can see, Facebook's testing a new emoji tool within Messenger threads - including a thumbs down, dislike response - which enables you to register your response quickly, just like Reactions. Your response is then displayed below the relevant message in the thread.

Why in Messenger and not Facebook-proper? As noted by TechCrunch's Josh Constine, quick responses like this could be especially helpful in fast-moving group chats:

Boss - Everyone OK with ordering pizza for lunch?

Coworker 1 - Does anyone want to go to the food trucks instead?

Coworker 2 - I'm going to go for sushi if anyone would rather do that.

As you can see from Constine's example, such conversations can get convoluted - who and what you're responding to can get muddled by the responses delivered in between. But if there were an easy way to respond to a specific comment...

Really, the addition makes perfect sense, so long as the Reactions don't intrude on the conversation flow, which Facebook's trying to avoid by making them smaller, appearing directly beneath the relevant message. 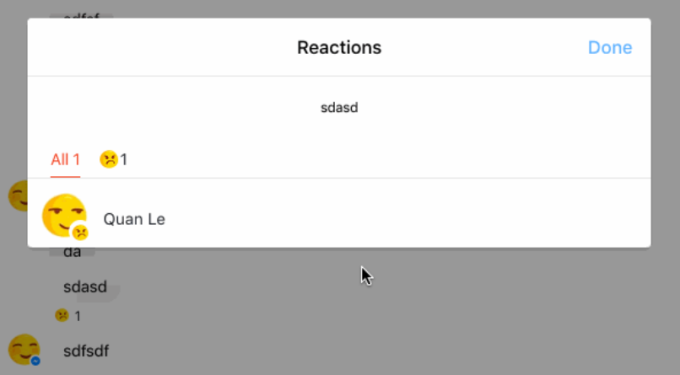 But much has been made specifically of the thumbs down, or dislike, response here. Why would Facebook add a dislike option in here and not in the main app?

There's a couple of reasons why a dislike - if that's what you want to call it - makes more sense in Messenger.

First off, Facebook says it's not a dislike - they see it as a 'no'. But second, the people you're engaging with on Messenger are more likely to be friends and acquaintances, making the social consequence of a dislike less impactful.

Disliking someone's public post could make that person feel uncomfortable about sharing in future for fear of being hit with more negative responses which everyone can see. But in private, these are people you know - you're likely much more aware of the intended context of the thumbs down, and therefore less likely to take offense.

Of course, Facebook's also pushing to get more users engaging with brands on Messenger and using the Messenger platform for customer service, and a dislike button in that context could have a different meaning. But again, it's not public - the potential negative implications of a thumbs down response are lessened because it's a more private channel.

In addition, simplifying responses could actually make it easier to communicate with Messenger Bots, Facebook's other big Messenger for commerce element.

Really, adding quick response tools into Messenger seems to have more functional value than Reactions on their main platform, which, Facebook says, have been used 300 billion times since launch. That sounds like a lot, but for context, Facebook reportedly generates around 4 million Likes per minute - as such, Reactions are only contributing a very small amount of overall user response activity.

But on Facebook-proper, they don't serve an immediate need - they're an additional response option to indicate how you feel, but they don't necessarily improve communication and connection. On Messenger, they would, which seems more valuable, at least on the surface of it.

There's no word on whether this functionality will be rolled out more widely, Facebook has only confirmed that this is a "small test" at this stage.