Twitter at 10 - The Platform's Founders Discuss it's Past, Present and Future 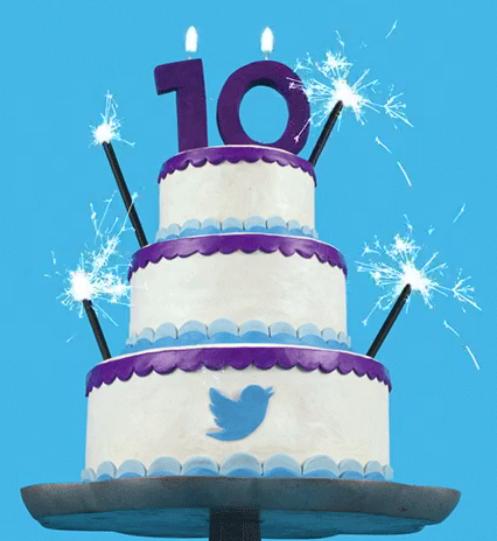 Twitter, everyone's favorite micro-blog platform turns 10 today. Yes, hard as it may be to imagine, there was a time when tweets simply didn't exist. And that's an interesting perspective to consider - for many younger people now moving into adulthood, Twitter, just like Facebook, has been a part of their lives as long as they can recall, a consideration that's also important when planning on how to get in touch with the next generation, how to connect with them on the platforms which they're accustomed to, which they've grown up with. And while Twitter's user growth has stagnated in recent times, 320 million monthly active users is still very significant, and the role that tweets play in our wider interactive landscape is also important - these days, tweets are everywhere, from the nightly news broadcast to the back of your milk carton.

It may sound like rhetoric, but when Twitter says they actually reach more than 500 million additional people per month who aren't actually logged in users, they may well be right.

To celebrate the occasion, Twitter's founders - Jack Dorsey, Biz Stone and Evan Williams, sat down with Chris Hardwick of Nerdist to discuss the history of Twitter, how they've experienced and dealt with the platform's growth, and, importantly, to answer some common user queries - including that one about editing tweets.

(Note: the Periscope stream will be unavailable after 24 hours)

While the initial discussion goes into the history of Twitter, the second half gets into more current, pressing matters, and the insights provided by the founders provide some indication as to where Twitter may be headed.

One of the first questions asked is around tweet length - there's been much debate recently about the possibility of longer tweets, speculation that was actually fuelled, in part, by Dorsey himself. Last week Dorsey eased concerns about a pending change to tweet length in an interview with The Today Show, in which he stated that the 140 character limit is definitely staying, but while user growth remains a concern, any possible change will remain under some consideration.

In response to a question about a possible change in tweet length in today's interview, Dorsey said:

"The brevity [of tweets] is very important, that natural, like, 'of the moment', kind of poetry and feeling, is really important. But it also creates this behavior where people are using it to point attention to all these interesting things, and that's been awesome to see over time."

Stone added to this, saying that for many users, the brevity is a comfort and has been part of the platform's wider appeal.

"It's comforting knowing that that's all I have to write."

And Williams, too, supported the idea of maintaining the current tweet character limit, saying that while some users would love to have room to share more info, others may also find any such extension intimidating, which could reduce engagement.

"If you could craft the great American novel on Twitter, some people would - and it'd be amazing - and then everybody else would be like 'well, I can't do that'"

Probably the most common request that comes up around Twitter is the addition of an option to edit tweets. Every Twitter user knows the pain of sending a flawed tweet - you've thought it all through, you've planned out every character and letter perfectly, and just after hitting 'Tweet' - as you're basking in the glow of your short-form genius - you notice a glaring, grammatical error. Or worse, you it notice a few hours too late.

Adding in an edit function seems like a no-brainer for the platform - you can edit Facebook posts after the fact, so why not tweets too? It comes up time and time again - even Kim Kardashian herself has called upon Dorsey and Co to up their game and add in the feature.

I just emailed Twitter to see if they can add an edit feature so that when u misspell something u don't have to delete & repost Let's see...

But according to Twitter's founders, editing tweets is not so easy.

"People ask this all the time and we shouldn't trivialize it, but one of the biggest things I've learned about the internet, after helping people put their thoughts on it for 20 years, is that people regret putting their thoughts on the internet. At Blogger many years ago it was by default that your blog post showed up with your name, and then we got all these frantic e-mails - 'oh my God, how do I get my name off the internet attached to my thought', and so we had to built that then. But the idea of an edit button seems trivial, but then if people respond to your tweet, or re-tweet it, then you change it, it actually has many complications to it that people don't necessarily think about, so - not that it's impossible or that it shouldn't be done, but just want to point out, every decision like that, just so people know, has very broad implications, not only technically, but behaviourally and changes the nature of everything."

This reason - that people can go back and edit and change the entire meaning of a tweet - has been constantly referred to as the key stumbling block for an 'edit tweet' option over time. Of course, as noted, you can edit a Facebook post, and they can just as easily be embedded are used elsewhere, and people could just as easily alter their meaning, so in that context, this argument doesn't really hold weight. But then again, the counter-argument would be that tweets are shorter, so any change is likely going to be more significant.

It's a difficult balance, for sure, but I suspect an edit tweet option will be coming at some stage - if they implement it and people end up using it to go back and alter the meaning of their tweets, Twitter can always roll it back. And either way, I suspect this would only cause problems in a small percentage of cases, whilst being of benefit in a great many more.

The trio also shared their thoughts on the development of the platform and how it's evolved into something beyond what they could have imagined. As noted by Stone:

"It's become the world's terminal for breaking news."

That capacity to connect the world in real-time was a strong point for all the founders, and that Twitter must remain true to its ability to link users into the pulse of the world.

Stone praised the potential benefits of the platform and the many uses of Twitter data:

"Historically, when you get the information first, you win. That's financial markets, that's other things - you get it first, you're ahead, you can make the decision before anyone else, so it's got value wherever you put it."

Williams, meanwhile, reflected on the platform's capacity for social good and benefit, noting that when they're considering how to improve the platform, they look to how it can do more.

"What can we do for you today that makes your life better by telling you something you didn't know or giving you the opportunity to connect with someone?"

That capability is one of the greatest strengths of Twitter, and one which we've not yet fully realized. If we could use Twitter's stream of real-time events and topics, narrowed down to local level, it would enable users to stay on top of everything - from traffic concerns to health alerts to important regional issues and the wider sentiment around them.

And while Twitter's yet to fully realize its potential and benefit in this regard, one thing that's abundantly clear is that Twitter's active user base is truly passionate about the platform. Every change - from 'stars' to 'hearts', real-time to algorithm-defined, 140 characters to whatever else - every update is met with a huge backlash from Twitter's core user groups. And, according to Stone, that's a good thing, who noted that such discussion only shows how passionate and attached their users are to the platform.

While nothing was announced in the interview - no new upgrades or tools have been unveiled to mark the occasion - what is clear is that the team at Twitter are listening, and they are working to evolve the platform into a tool that caters to all that's requested of it. And at the same time, you get the impression that these guys are just like us. They're learning what people are using Twitter for and growing their own expectations and ideas along with the rest of the extended user base. Dorsey, Stone and Williams don't come across as big-time corporate execs trying to make Twitter into the biggest money-making machine it can be, they come across as normal guys who've created a platform that can help in a great many ways.

And while there definitely is a corporate strategy in play, the core of Twitter remains human, based on human elements and human needs. That, to me, is one of the greatest aspects of the platform - that it's a pulsing, living thing, a reflection of the human condition, happening in real-time.

Here's to Twitter on it's 10th birthday - looking forward to what comes next.