What Taylor Swift's Social Media Blackout Can Teach You About Reinvention

On August 18th, pop star Taylor Swift suddenly vanished - online, that is. The singer went dark across her Facebook, Twitter, Instagram, and Tumblr accounts, deleting all of her posts, unfollowing everyone she had been previously following, and leaving her accounts stripped bare.

Over the course of the next six days, Swift would tease her return through cryptic clips of a snake, leaving the internet buzzing over theories as to what it could all mean. 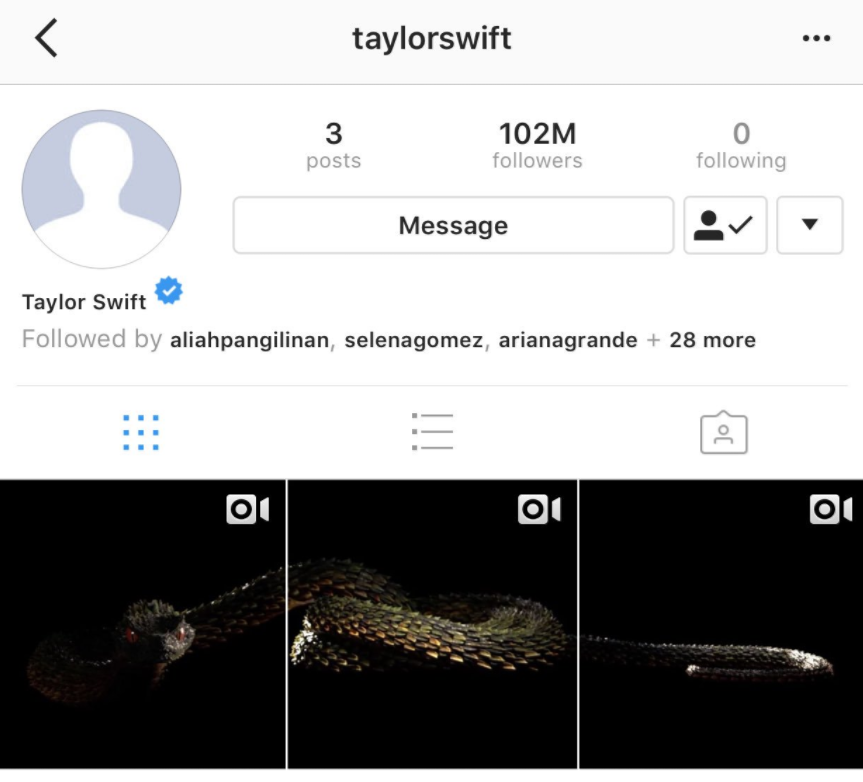 This led up to a trio of posts launched on August 23rd about her upcoming album, single, and album cover, showcasing what is sure to be a radically new era of Swift as a musician and as a brand.

Could any one of us be so bold as to follow in Swift's footsteps?

The act of fully deleting your social media history could easily be terrifying, something one might have nightmares about, since a good chunk of our lives have been preserved through these platforms (businesses, especially, might be the hardest to sell on the idea).

However, going dark might be exactly the kind of approach you need to reinvent yourself, especially if you feel stuck with where you're at currently.

Here are some of the hidden benefits that come with wiping your social slate clean.

I find it interesting that Swift's initial return to her social accounts was with clips of a snake.

While much of the internet believes the choice is a nod to the celebrity feuds she has publicly been part of, I see it as a symbolic decision. Snakes have historically represented fertility. When a snake sheds its skin, it's considered a symbol of rebirth, getting rid of what does not fit anymore. New skin, new approach.

One of the greatest gifts that come with being stuck in a creative rut is that there's always the opportunity to start afresh. As Swift evolves as a musician, so we all evolve within our given fields and industries.

You can stick to the routine or choose to move on - getting on with life and embracing your inner snake to become your own creative force.

It's a chance to get creative - really creative

Here's the good news about a social media wipe: you don't lose any of your followers when you do it. If anything, you'll mostly lose older content that's perhaps not as relevant anymore to you, and full of rookie mistakes. This is your chance to get creative and play around with the content that you post - after all, you already know what your audience responds to best and when and where to reach them.

This is also your time to truly find your symbol. What do you stand for?

Even when you're at your peak, you can still continue to reinvent yourself and know that your audience will continue to be invested in that narrative.

It's only human to want to continue to learn, grow, and explore - and this is something we all understand.

You make a big impression when you deviate from the norm

We're reaching a point in social media where things are gradually becoming systematic:

Nobody would dare fully stop or even pause their strategies for long today, because it can be detrimental to the brand's relevance.

What makes Swift's approach so interesting is that, to my knowledge, no other musician has ever done something like this.

Sure, there have been surprise album releases in the past, but typically there's a set formula for announcing a new album is coming via social media. Countdowns begin and clips and posts are shared in order to get fans hyped and ready to download and buy it. Swift's handful of posts didn't even have captions, but fans responded to them anyway because they're intriguing and mysterious.

When you deviate from the norm, you're ultimately shaking up the system and putting your own mark down in a place where there wasn't one before.

Whether you're a fan or not, Swift's approach definitely added some intrigue - and raises some questions about potential social media marketing options to consider.