So, by now you've seen this:

Even for the more reserved among us, a new Star Wars film is pretty exciting - it awakens the child within and reminds us of playing with toys and waving around sticks (while humming noises) as a kid. The arrival of our latest glimpse into 'a galaxy far, far away' definitely caused a disturbance in the social media force, and social intelligence company Wayin has compiled some stats looking at the volume of social mentions and key areas of interest. Here's what they found.

The new preview for 'Star Wars: The Force Awakens', the seventh film in the storied franchise, premiered on Monday night football on ESPN, and it took no time for the excitement about the new images to spill over into online communities. According to Wayin, the new film has been tweeted about almost 2.5 million times in the past week, with 84% of those tweets being positive in sentiment. 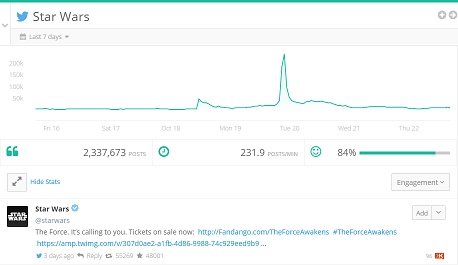 In examining those mentions, Wayin found that 'Trailer' was the most common term - which makes sense, the new trailer (above) has already been viewed on YouTube more than 48 million times, with many of those views being driven by the wider social media conversation and chatter. Other popular terms were 'Force', 'Awakens', and 'Leia' 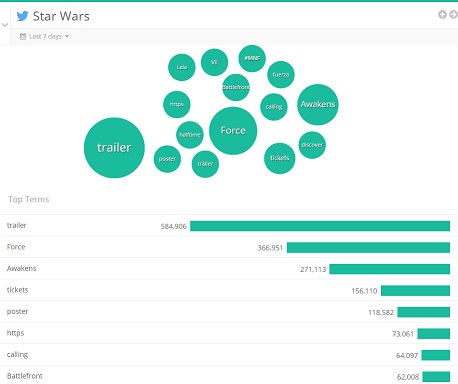 In terms of demographics, Wayin found that 75% of the people tweeting about Star Wars were male.

No real surprise there, though maybe that will shift with the introduction of a new, female lead protagonist, as indicated in the previews. Wayn's data also shows that the majority of discussion about the new Star Wars trailer came from the east and south coasts of the US, which, Wayin speculates, is where the film is likely to see more revenue from ticket sales (worth noting, The Force Awakens has already broken all records for pre-sale tickets). 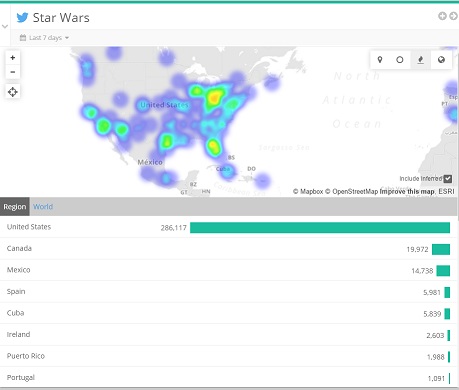 Overall, it's clear that there's huge anticipation for the new Star Wars, with a whole new generation set to be enchanted by this tale of inter-galactic conflict. But what's really been impressive is that the producers have managed to create three previews for the film which give away virtually nothing about the actual storyline of what the movie is about. For that, we'll have to wait till December, when Christmas will come early for kids - old and young alike.