3 Brands Who Sell Their Culture Through Social Media Storytelling

Why is the digital marketing landscape so hot for storytelling?

The answer is that digital storytelling taps into the same need that readers have to be transported by the power of words and images, but it also does something else.

It tells the audience the ‘why’ of your business as opposed to the ‘what’, and in doing so, can help establish trust and loyalty, which, in turn, helps to drive all your other marketing goals.

If you’re not sure how to create storytelling campaigns on social media that'll appeal to your audience on a deeper level, these three examples of brands that have done it right might help spark your creative instincts.

When it first hit the market as an affordable replacement for expensive hotels, Airbnb seemed like a novelty act. It's since become a juggernaut, proving how much crowdsourced services work in the digital age.

But Airbnb doesn’t just sell a place to stay in its social media marketing. Instead, the company sells the sense of shared community, and the transformative experience that many hosts and guests feel when they connect with each other.

Nowhere is that more evident than on the company’s ‘stories’ webpage, where Airbnb curates wonderful travel stories from around the world. 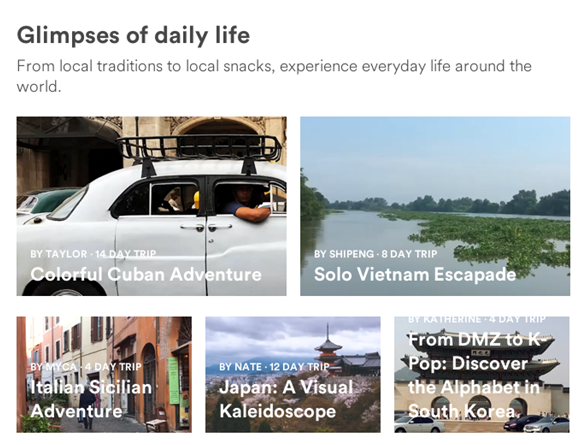 Airbnb’s stories page includes videos that bring diverse experiences around the world to life, enabling visitors to immerse themselves in everything from an adventure in Sicily, to the old-world splendor of Cuba.

Notice how Airbnb is able to use social media as a vital means of sharing experiences that are meant to show the connections strangers can make through the company’s services?

Now think about your own business - for example, if you’re a dentist who specializes in painless procedures, you could mount a social media campaign in which people post videos talking about their worst fears about going to a dentist. Sharing these fears can make your audience feel like they’re not the only ones in the world who hate going to the dentist, but it can also serve as a powerful testimony about how your services remove these fears in one fell swoop.

Marketing a toilet-paper company has some challenges, but Charmin has toed the fine line of using ‘potty’ humor to drive its social media marketing.

One perfect example is the company’s #EnjoytheGo social media campaign, which featured the familiar Charmin bear family. In the campaign’s tagline of “Sit Back, Relax And Enjoy The Go,’ the word ‘go’ was clearly meant as a code word for visiting the bathroom.

Instead of referencing the act itself, Charmin's campaign was all about making the experience as comfortable and enjoyable as possible. The campaign even used words like “The relief, the calm, the clean, the joy, the pride.” 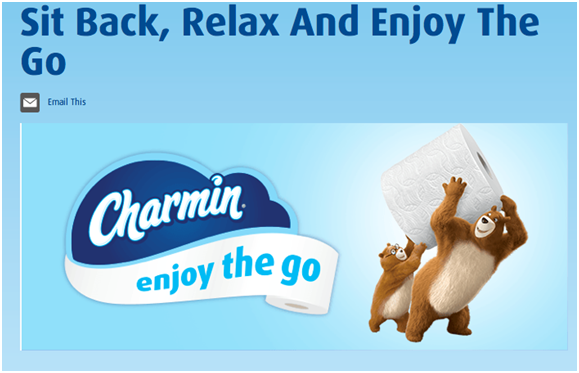 Charmin’s storytelling is all about making a taboo subject as normal as talking about going for a swim or visiting the grocery store. By using humor with a subject that could easily be interpreted as offensive, Charmin has branded its product without actually ever talking about what that product does.

DirecTV has a "small fish in a big pond" problem.

The company is smaller than its giant cable competitors, and it's also playing in a different space, because it offers satellite services instead of cable, which is a much smaller piece of the industry pie. But instead of shrinking from the fight, DirecTV launched social media campaigns which target cable subscribers by showing how much their lives could improve by shedding cable.

The most memorable campaign featured well-known actor Rob Lowe, who appeared in spots in which he would play ‘good’ Rob Lowe, who switched over to satellite and was well dressed, stable and happy - versus ‘bad’ versions of Rob Lowe, who remained a cable subscriber and did nothing worthwhile with his life.

The storytelling in this campaign was brilliant, because it was such a primal, easy-to-understand good versus evil tale. On one side, the put-together version of Rob Lowe had achieved success and stability by investing in satellite. On the other, the seamy and downtrodden versions of Lowe had stuck with cable, and lived miserable, unchanging lives.

The campaign was successful, because it was funny, but also because it associated success, happiness and positivity with DirecTV, and misery and a lack of prospects with cable TV.

While outrageous and hilarious, the storytelling shone through in the American ideal of changing the status quo as a means of upward mobility - and DirecTV did all of that in less than 60 seconds through narrative and impressive visuals.

Although that campaign ended a few years ago, DirecTV is mining the same territory with its new campaign in which it compares ‘weird’ people who enjoy uncomfortable or painful situations (like hot coffee being poured on their thighs), and normal people who enjoy subscribing to DirecTV.

If you can find a humorous and/or outrageous way to contrast one group that would find your product or service appealing, with another group that “just doesn’t get it,” you can likely find storytelling success.

Storytelling is basic communication - it has a beginning that hooks your audience, a middle that presents the problem, and a happy ending. Tap into that primal need, and you can boost your brand awareness - and ultimately increase conversions.