In case you live under a rock, missed the memo, or don't have an iPhone, the iOS-only social audio app Clubhouse is making waves.

Clubhouse just celebrated its one-year anniversary, while closing in on 13 million downloads just from the Apple App Store. According to eMarketer, 2% of US adults are now using Clubhouse in some form or fashion, which trails the other, major social apps, but is still significant growth in such a short space of time. 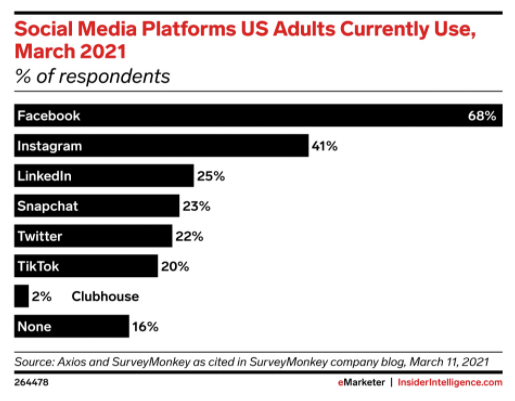 Clubhouse usage and adoption could also be set to see a big increase once it opens up to Android users, which has been rumored to be coming in May.

But Clubhouse is also not the only audio social player in town.

Twitter is working to enable all users to host their own audio Space in the app by April, which is already in testing on Android devices, while LinkedIn is also experimenting with new features to help its users become more influential on the platform. It's also developing its own social audio experience, while Facebook, too, is testing the waters on the audio social front.

Industry analyst, Jeremiah Owyang is tracking this space closely and has documented almost 36 social audio apps in the market today. As with most social media networks, I expect there to be major consolidation in the next 12 to 18 months. We’ll see who is left standing - but it can’t be denied that social audio is just getting started.

There are many opportunities for brands to participate and use social audio apps to engage with customers, and tell brand stories. At the same time, there are risks whether brands participate or not.

The Opportunities for Brand Engagement

There are a few different ways that brands can utilize social audio for marketing and communications programs. This will certainly evolve over time as more apps come to market and build new functionality.

I've already seen a few rooms that have been sponsored by brands. In March, influencer marketing platform, Izea sponsored a room called “The Value of Influencer Platforms” hosted by Lissette Calveiro who is also an influencer herself. Currently there isn’t functionality built into Clubhouse that will facilitate money exchange between influencers and brands but I’m sure it’s a high priority for them. Clubhouse has begun a new experiment on Creator Payments.

Currently, there are no ads in Clubhouse, but it would make sense to do this. Imagine that users would have to watch a video, or sign-up for a newsletter before entering a room that's just started. For B2B brands, this would also be an opportunity to generate leads, just like you would sponsoring a technology convention and having a booth.

Clubhouse is all about sharing knowledge, educating others and learning. This presents a huge opportunity for brands that have executives who are experts in their space and want to grow their influence across the social media ecosystem. I've already seen several executives from leading technology companies hosting and participating in rooms and building their influence.

Similar to executives, employees who have expertise in certain areas can grow their influence, build relevance and share knowledge. I'm not saying that employees should be spamming rooms with branded messages either. It’s about thought leadership, and providing value to the larger conversation and community. The brand association itself can make an impact to the business.

The Challenges for Brands and Social Audio

Currently, there's no way to track conversations happening in audio rooms, for a variety of reasons.

The current search feature within Clubhouse only enables you to explore people and clubs based on the keywords you're searching for. In fact, the only way to keep track of room topics or conversations is to listen in directly or monitor other social media platforms in case someone shares information about the room there.

The other day I was looking through the data and noticed a very critical tweet of someone highlighting the lack of diversity in a panel conversation that happened in Clubhouse three weeks prior. They also mentioned the company name within the tweet, and it appeared as though that they thought it was sponsored or hosted by the company.

I know the head of marketing there and sent him an email flagging the issue. He had no idea this room ever happened, and to this day, he still doesn't know what the room was about or who any of the speakers were.

There are a few things to unpack here.

First, anyone can start a room at any time, and say anything, about any brand or person. And even the brands that have sophisticated monitoring and social listening programs still can't capture what's being said in the app. Even if you had teams of employees in and out of the app, it quickly becomes an issue of scale.

The good news here is that Clubhouse has unique URLs for rooms, clubs and now users’ profiles. Most social intelligence platforms can scrape websites to pull data, but unfortunately, Clubhouse only publishes the first few sentences of the room, club or profile. This is not very useful in a time of crisis, but at least it’s a start.

A crisis or issue can be caused by many factors. Disgruntled employees who are upset with management, their pay, their coworkers or their benefits. Customers who have a negative experience with a brand. And of course, the everyday trolls who have nothing better to do but stir up trouble.

There is a bright side to this. As of today, there's no record of any room or the conversation within a room once it's over. In other words, it won't show up 2-3 weeks later in the Google search results. The caveat here is if someone blogs about the experience or tweets about it, as I highlighted in the example above.

I've been tracking social audio analytics since January and have compiled several Clubhouse insights that might be useful.

The key takeaway is that brands of all sizes, and across all sectors, must develop a plan before jumping headfirst into a new bright and shiny object. Yes, social audio is hot and dominating headlines globally, but having a well thought out plan will help ensure a successful marketing program, as well as a response plan when something bad happens.