Mr. Musk’s wild ride continues on the Twitter beat, with the billionaire Tesla owner deciding not to join the Twitter board, after initially being invited late last week.

Earlier in the week, it was revealed that Musk had purchased a 9.2% stake in the company, worth close to $3 billion, immediately making him the largest Twitter shareholder. Amid concerns of a larger takeover, Twitter moved to appoint Musk to its board, which limits how many shares a person can own at any one time. Musk seemingly agreed, but then, late Saturday night, Musk posted a range of tweets critical of the company, including this:

We don’t know for sure what the response was internally at Twitter HQ, but going on Musk’s liked tweets, his comments seemingly did not please the current Twitter board. 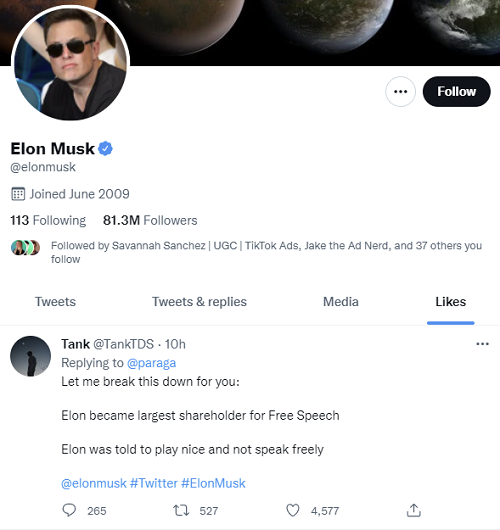 Following this, on Sunday evening, Twitter CEO Parag Agrawal shared that Musk would no longer be joining its oversight group.

Elon has decided not to join our board. I sent a brief note to the company, sharing with you all here. pic.twitter.com/lfrXACavvk

So what does that mean for Musk’s future plans for Twitter, and his stake in the company?

It’s impossible to say, only Musk himself would know his thinking on this. But it is interesting to note the revised wording of Musk’s new SEC filing on his Twitter stock purchase.

So to clarify, if Musk had joined Twitter’s board, his holding of Twitter stock would be restricted. This updated disclosure outlines that Musk is free to buy more Twitter stock if and when he chooses.

And Musk can say what he wants, which seems to have been Musk’s biggest bugbear in his possible appointment to the Twitter board.

Will Musk now look to buy more Twitter stock, potentially a controlling stake in the company, to enforce his self-claimed ‘Free Speech’ push, or will Musk slowly sell off his shareholding, and lessen his criticisms of the company, after making some kind of point with this massive purchase and subsequent tweets?

Already, Musk has deleted some of his tweets critical of the platform, but what that means, exactly, again, we don’t know.

Now we await the next phase in Elon’s grand Twitter influence plan.