After launching a co-watching feature for Instagram back in March, Facebook is now adding similar functionality for Messenger, which will enable users to host video watch parties, via video call or Messenger Rooms, with up to 50 friends in the app.

This week, we’re starting to roll out #WatchTogether, a new feature that lets you watch videos with friends in real time. Check it out - https://t.co/tOElBHDsGz pic.twitter.com/BfKoE5VVU1

"Today, we’re announcing Watch Together so you can enjoy Facebook Watch videos with your friends and family and see their reactions in real-time over Messenger video calls and Messenger Rooms. So, go ahead and oooh and ahhh over a video by your favorite celebrity, shed a tear over a puppy rescue video, laugh out loud at the latest viral videos, scream during Blair Witch or feel nostalgic while watching your favorite episode of Community. Watch Together will make you feel together even when you’re not."

That sense of community is a key focus here - the functionality has been added to help keep people connected at a time when many of us remain distant because of the various COVID-19 lockdowns and restrictions.

Indeed, just the other day I was feeling nostalgic for a time when I could drop by a friends' house at night and catch a movie, which is simply not possible for most in the current state. And while co-watching via a video call is not the same, it does provide at least some level of connection and interaction, which could be great for helping to build community and engagement.

Which could be particularly relevant for groups - you can imagine, for example, that a fan club group for a Facebook Watch show would love to have the option to view content together, and engage with each other as it plays out.

But then again, you could already do this via Facebook's Watch Party option, and in this respect, Watch Together in Messenger doesn't really add much. But it's another option to consider - and with more than 150 million video calls on Messenger every day, and more than 200 million videos sent via Messenger, it makes sense for Facebook to look for new ways to tap into that usage. 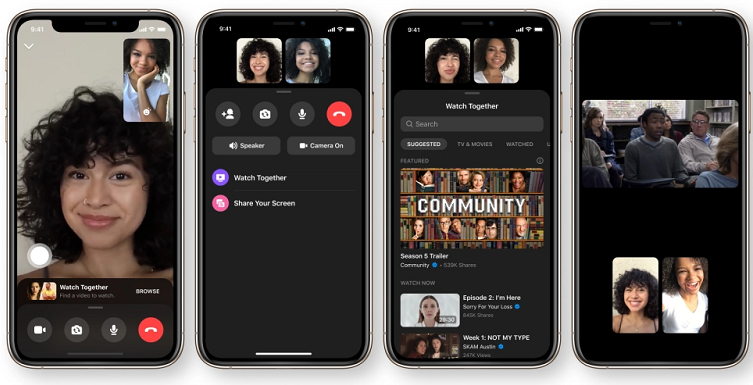 As you can see in this sequence, from there, you can search for the video you want to watch (with an emphasis on Facebook Watch content), or select from the recommended lists.

It's a somewhat interesting option - but as noted, much of this functionality has been available, in different forms, for some time. This just gives users another way to access it, which may still end up boosting such usage.

From a business perspective, there is also opportunity to tap into communal viewing, and Facebook indirectly provides an example in its announcement post:

"To celebrate this launch, we partnered with celebrity fitness trainer and author Melissa Alcantara to create a series of fitness videos to enable people to virtually work out with their friends and motivate each other to achieve their fitness goals. According to a study conducted by Messenger in the US, 70% of people who work out with a partner have achieved a fitness goal in the past 6 months; only 45% of people who work out alone have done the same."

That could be something to consider, creating co-watching focused content that can help encourage viewers through communal participation. There may be creative opportunities to consider on this front.

Watch Together is rolling out globally this week in Messenger and Messenger Rooms on both iOS and Android.