It's still too early to say whether Facebook's video play Watch will actually become a success. Early reports have indicated that Watch is not gaining significant traction, and this week, Facebook has released its own usage data, which highlights both the potential and challenges ahead for the platform.

But it's interesting to see how Facebook has worded the release:

"Three months since our global launch, there are already more than 400 million people monthly and 75 million people daily who spend at least one minute on Watch — and on average, these 75 million daily visitors spend more than 20 minutes in Watch. We’re seeing that people are regularly coming back to catch up on the videos they care about and watching for longer periods of time."

It depends on how you look at it - for one, 400 million people per month equates to around 17.6% of Facebook's MAU count, so less than a quarter of Facebook users are checking into Watch at all, at any time. Now, that probably isn't so important to Watch publishers if they're seeing significant view counts - if you're getting 100 million dedicated viewers per month, that's a pretty good result.

But in all likelihood, publishers aren't seeing that. When you break down the next set of stats, Facebook notes that 75 million people daily are spending at least one minute on Watch. That's not a very high retention rate - "at least a minute"? Facebook then says that, on average, those 75 million spend more than 20 minutes in Watch - but that average is clearly skewed by a much smaller percentage watching a lot - otherwise, why would Facebook report that 'one minute' view time stat at all? Worth noting too, back in August, research suggested that Facebook Watch had a base of about 50 million viewers, with a 'highly active group' of around 14 million users. It seems likely that the smaller group is driving the overall view time higher.

Essentially, Facebook's latest figures show growth, but highlight the significant barriers to entry Facebook has to scale in order to challenge Netflix (130m subscribers spending more than an hour per day viewing, on average), YouTube (1.8b MAU) and other video on demand players.

But Facebook is pushing ahead - The Social Network has also announced that it's expanding Watch availability to desktop and to Facebook Lite, while it's also making ad breaks available to eligible Pages in 40 countries around the world, boosting monetization potential.

In addition, Facebook has greenlit second seasons for four of it's most popular programs - 'Five Points', 'Huda Boss', 'Sacred Lies' and 'Sorry For Your Loss'. Those programs also align with Facebook's new push to boost appeal with older audiences, as opposed to focusing on 'Millennial-friendly' content.

Facebook Watch has potential - and you would think that piggy-backing on the most used online platform in the world would definitely be a big advantage. But it's also still got a way to go - and that advantage hasn't proven significant, at least not yet.

Still, it's worth keeping tabs on Facebook Watch, and what comes next. The Social Network looks set to continue pushing, and could still gain traction with the right programming and targeting - which Facebook can do better than anybody.

Facebook has also provided the below infographic summary of the early days of the platform. 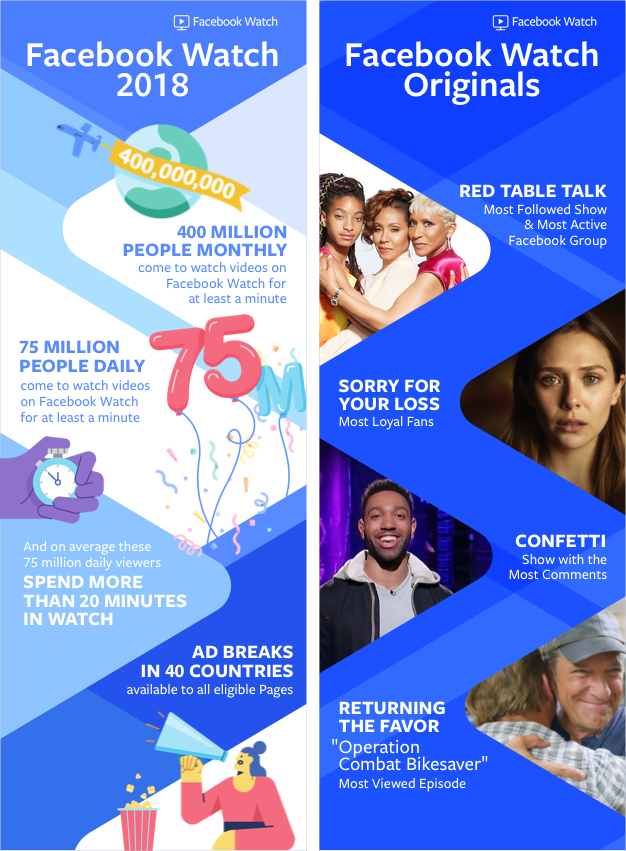