Facebook has released its latest ‘Topics to Watch’ report, which highlights a range of subjects that are gaining momentum, based on mention volume within interactions across The Social Network.

The monthly Topics to Watch reports can be a great way to stay ahead of the latest trends and shifts – according to Facebook’s research team, up to 80% of the topics they've identified in their monthly reports go on to become more significant movements. That means that if there's a subject relevant to your niche, you might just be able to get ahead of the curve, and capitalize on the rising attention.

But 'niche' is important to note here. While you can see from the data that these topics are clearly seeing significant discussion increases, they tend to be very specific. In many ways that makes sense - Facebook identifies anomalies within its data, so a topic like 'Trump' would get mentioned a lot all the time, but that's not new, so it wouldn't show up here. These are topics which were not previously seeing significant mentions, but are now - so logically, most of the subjects are a little 'left of center'.

But if you can see a brand angle for your business within any of these trends, it may be worth tapping in with content and/or campaigns.

First up is 'chayote', a crisp, mildly sweet squash which hails from Central America - which, Facebook says, is growing in popularity across the United States. 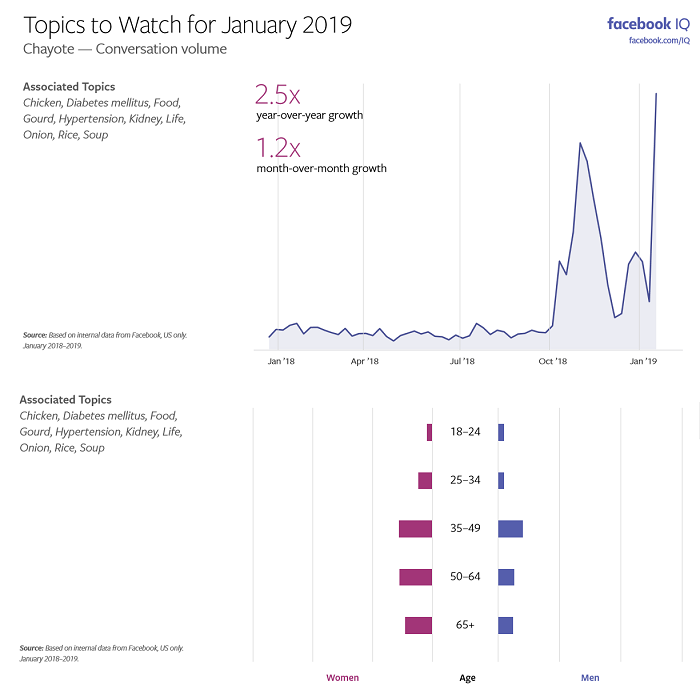 "Used in everything from stew to salad, [chayote is] praised for its versatility, as well as its health properties. Chayote is low in calories and carbohydrates, as well as chock-full of antioxidants, vitamins B and C and potassium. It’s also known to be beneficial to people trying to regulate their cholesterol or blood sugar. As people try new diets and embrace healthy living, foods with high nutritional value are making their way into recipes - and restaurants - across the country."

Maybe one to consider for a new healthy eating campaign.

Next up is 'Guitar Battle' - which is not a TV show or video game. It's literally, as Facebook describes: "two musicians playing solos one after the other, ultimately competing for a crowd's approval." 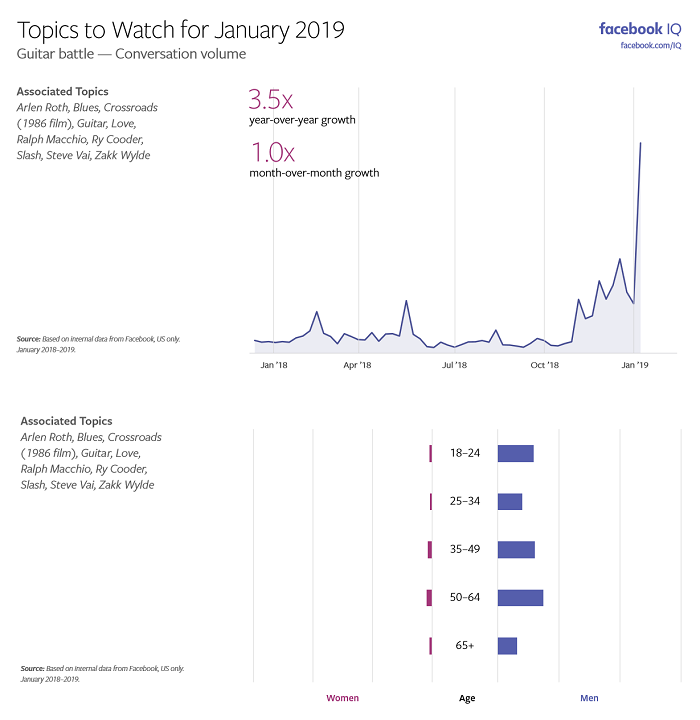 I mean, I haven't seen a heap of guitar battles, but it could provide a good tie-in opportunity for music-related brands and venues.

Next, Facebook says that 'hydroelectricity' is seeing a new rise in discussion as people seek alternative energy sources. 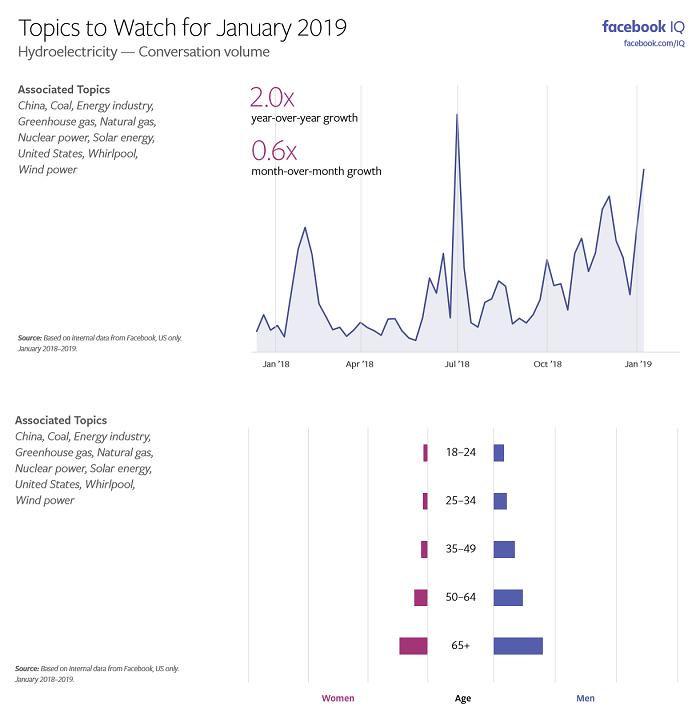 Most of the renewable energy debate has revolved around wind power, but hydroelectricity could be another option to consider - and it's clearly being mentioned more, particularly among older groups.

Titanium, largely in relation to jewelry, is next up on Facebook's list. 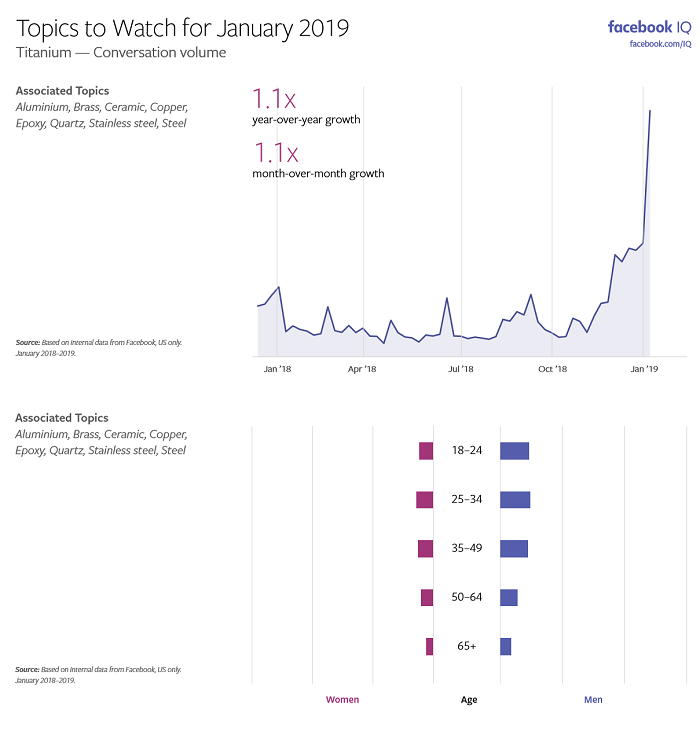 And it may be more than just the look of titanium that people are interested in - as noted by Facebook:

"It's even discussed in the context of alternative medicine, as some believe that wearing titanium jewelry can reduce pain and inflammation and even promote healing in the body."

A couple different of angles to consider - and definitely, looking at that first chart, there's been a significant spike in interest in recent months.

Next up - more people on Facebook are looking for ways to get more restful sleep, in order to boost their feeling of 'wakefulness'. 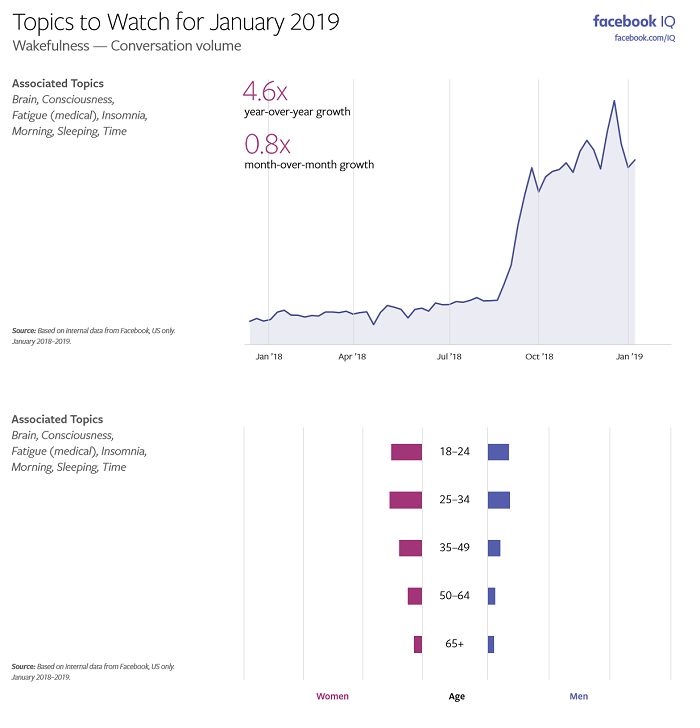 This has become a new focus, as people feel more tired and rundown, and are seeking new options. Offering solutions to improve wakefulness may be a way to tap into this growing trend.

And the last rising topic on Facebook's list is 'winter festival'. 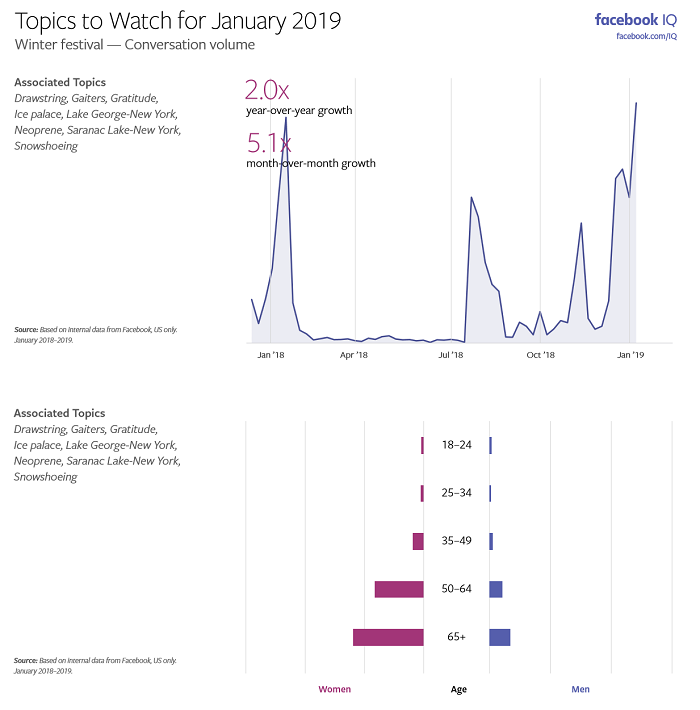 How useful this will be for marketing purposes and planning, I'm not sure, but Facebook notes that:

"Local communities have been holding winter festivals for decades, bringing people together to share in traditional winter-centric activities like ice carving, skating, ice hockey and even dog sledding. These festivals may be growing in popularity, as local organizations spread the word about their events on social media, and people discuss trips to new towns and cities to enjoy the wonders of winter."

As noted, Facebook's 'Topics to Watch' reports can be a great way to get ahead of the next big thing - though the subjects identified are very specific. But there are plenty of opportunities there - if any of these relate to your business, they may well be worth further examination.