Facebook has this week released its latest ‘Topics to Watch’ report, which highlights all the key subjects that saw significant increases in mention volume in December 2019, the last month of the last decade.

Facebook's Topics to Watch reports can be a great way to stay ahead of the latest trends and shifts – Facebook’s research team says that up to 80% of the topics they've identified in their monthly reports have gone on to become more significant movements, which means that by tapping into them early, you can potentially stay ahead of the curve.

But they are, at times, pretty vague. Or not vague so much as abstract or conceptual - you rarely get a solid trend like people discussing a new product, or even a trending color.

More often than not, the things seeing increases in attention among Facebook users are not immediately applicable to an obvious brand marketing approach. You'll see what I mean - first up on Facebook's list for December is 'bioluminescence': 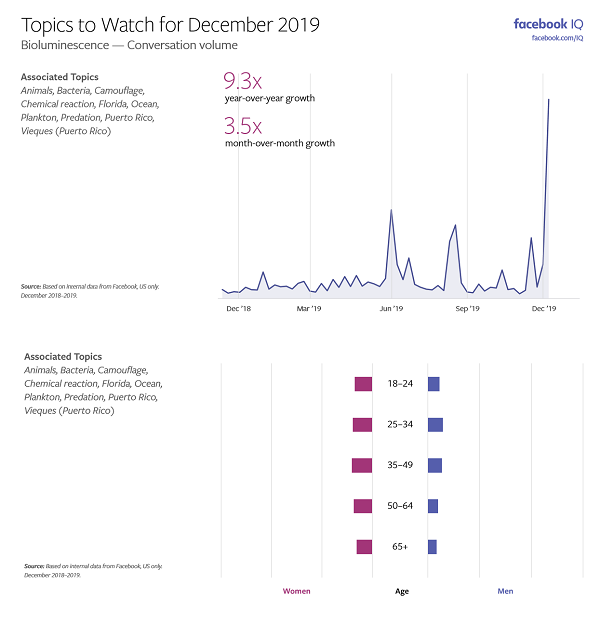 As you can see here, bioluminescence - or "the glow that emanates from certain types of living beings, such as jellyfish and plankton" - saw a huge spike in Facebook mentions in December, largely driven by discussion around medical research into creating a bioluminescent protein which can make human cells glow.

"This protein has been used to help doctors track different types of diseases in the human body, enabling them to “tag” cells and monitor their progress."

Not highly applicable to brand campaigns, but still, it's what's getting interest on Facebook. You see what I mean about conceptual.

Facebook also says that 'celery' has been getting more attention of late. 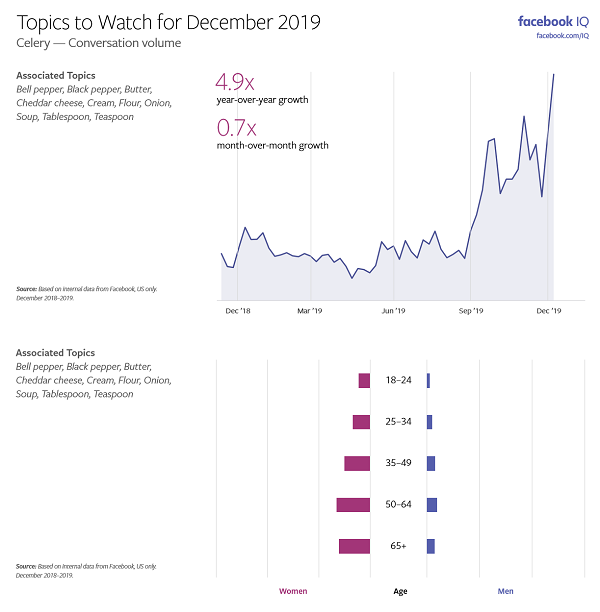 That's been sparked by heath food-related discussion, and increased interest in the vegetable within such. Which makes sense - heading into the new year, people are likely looking for ways to get healthy, and support their New Year's resolutions.

Celery is probably more applicable, in a marketing sense, as it can be added to menus, smoothies, highlighted in posts for health-related brands, etc. If you're operating within that sector, and you're looking to reach older users, it could be worth considering. 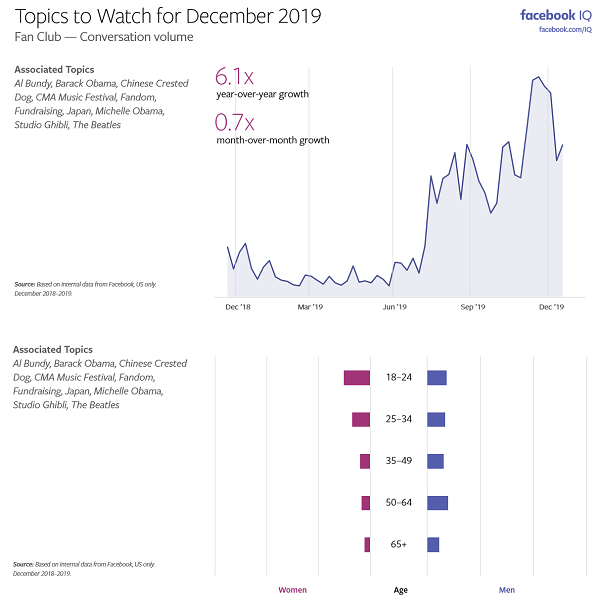 "Fan clubs are growing in popularity, as people discover others who share their interest in everything from sports teams to dog breeds." 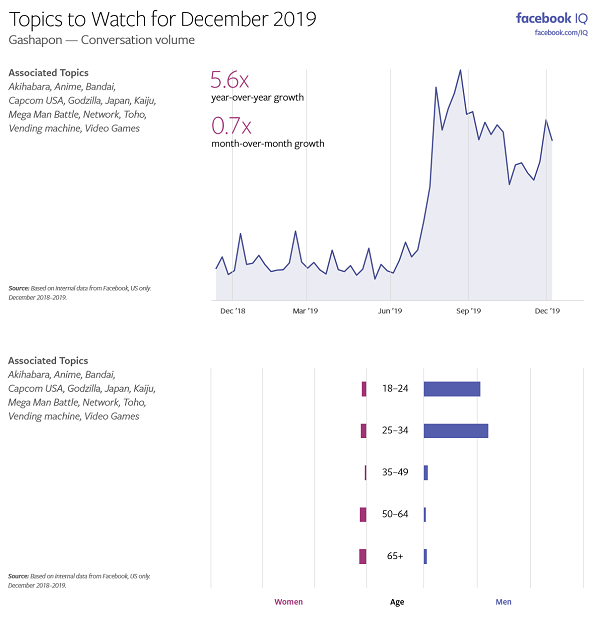 Facebook notes that some of these toys are becoming significantly advanced:

"Some are even functional: A small air conditioner was recently sold in a gashapon form with only minor assembly required."

Pretty amazing. Again, the marketing value of such seems fairly limited, but interesting to note either way. 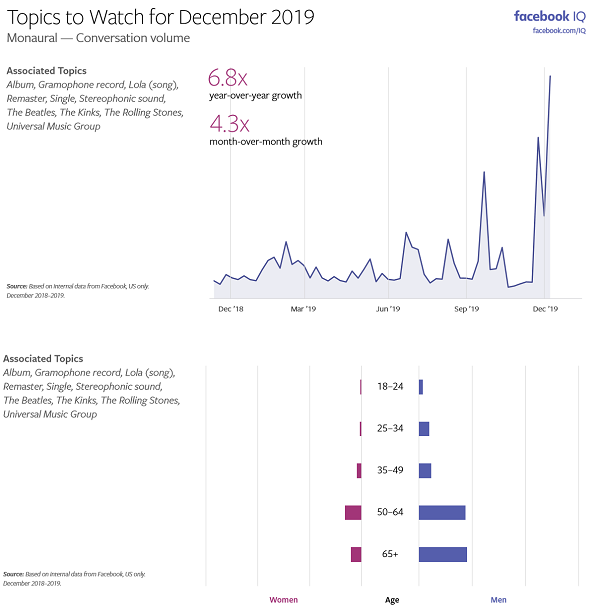 Monaural sound is when the same audio signals are delivered through each output, regardless of how many outputs there are, as opposed to stereo sound, where the audio is split across channels.

Facebook says that modern audio fans are increasingly seeking out monaural recorded music, as it can sound better than stereo when played through Bluetooth speakers. An interesting trend of note for those in the music sector.

And lastly, Facebook says that Neptune is back in vogue. 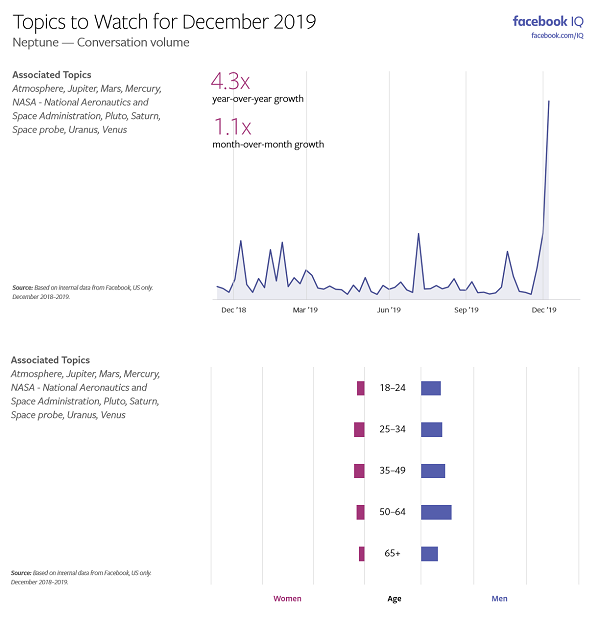 I mean, I don't know if Neptune was ever in or out of vogue, but either way, people care about Neptune, with increased discussion around the eighth planet in the Solar System.

But then again, that boost in attention may not be what you would expect.

"In the astrological sphere, people have been talking about the effects of Neptune’s retrograde, which concluded in 2019, and how the planet has affected the emotions and relationships of each star sign."

Decidedly less astronomical, but still, it may be another angle to consider in your approach.

As noted, many of the trends identified are fairly niche, or fairly vague, which doesn't provide a heap of immediate direction in a marketing sense. But there are likely various ways that related businesses can link into such trends - and if there's any angle that fits your content approach, it may well be worth exploring.

You can check out Facebook's full Topic to Watch report for December 2019 here.