Facebook Outlines How It's Promoting Census Participation, and Monitoring for Census Misinformation

Amid the ongoing impacts of the COVID-19 lockdowns, the US Census is also underway, with local officials encouraging residents to complete their Census questionnaires throughout this week.

And Facebook is looking to play its part in the process. Given the importance of Census data, which dictates everything from congressional representation to federal funding, Facebook has been pushing to ensure that its users take part in the Census, while it's also been working to detect and remove Census misinformation, including misleading and/or false reports aimed at discouraging participation.

"Too often in our past, some communities and groups have been undercounted. That is completely unacceptable and we need to do everything in our power to make sure everyone can take part. The ability to complete the census online for the first time gives the technology sector a unique opportunity and responsibility to help make sure every person is counted." 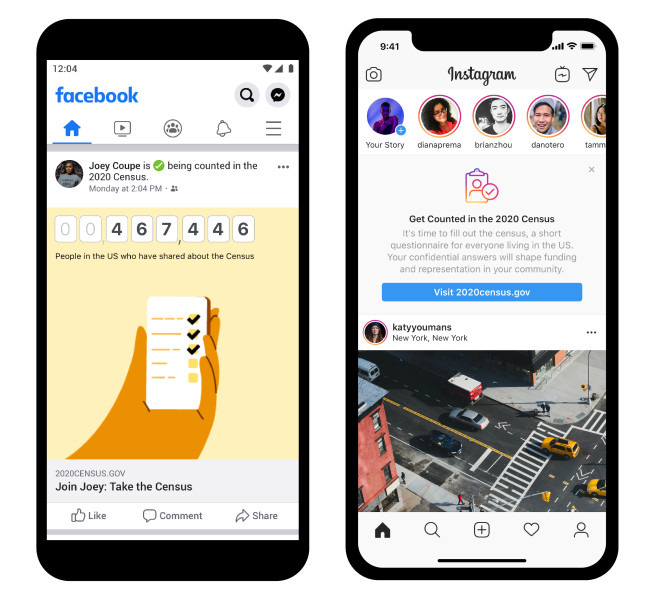 Such prompts definitely work, especially the variation on the left-hand side above. Back in 2010, Facebook researchers found that they were able to encourage around 340,000 extra voters to take part in the US Congressional elections because of a single election-day Facebook message which used social elements (i.e. 'Your friends have voted') to promote participation.

The bottom example here resulted in significantly more people heading to the polls, using the added impetus of your friends' actions as a driver for you to do the same. Facebook has since stopped such large-scale user experiments, especially around elections, but the results of this experiment show that Facebook can effectively encourage participation, which would be why its chosen a similar format for its Census messaging.

It also, as an aside, belies Facebook's broader downplaying of its role in subsequent elections and their outcomes. Again, Facebook knew back in 2010 that it could significantly influence voter behavior, and that was when it only had some 130 million total North American users. Facebook has 248 million North American users now, for reference.

In addition to these prompts, Facebook has also been working to protect the integrity of the Census by actively monitoring for Census misinformation, and removing such where it can.

"We’re using our virtual Election Operations Center that brings together more than 40 subject matter experts from across the company for real-time monitoring for misinformation or abuse related to the election or census. The team is made up of specialists from our threat intelligence, data science, software engineering, research, community operations and legal teams. They’re trained to quickly investigate spikes in misinformation, hate speech, or census or voter suppression - and take action when warranted."

Facebook outlined its rules around Census misinformation last December, and now, its actions around the monitoring and enforcement of such will act as a sort of trial run for the upcoming US election.

In addition to this, Facebook has also trained local officials in how to use CrowdTangle, Facebook's trend monitoring tool, enabling them to also spot potential misinformation and suppressive content, expanding its resources to detect and remove such before it has an impact. 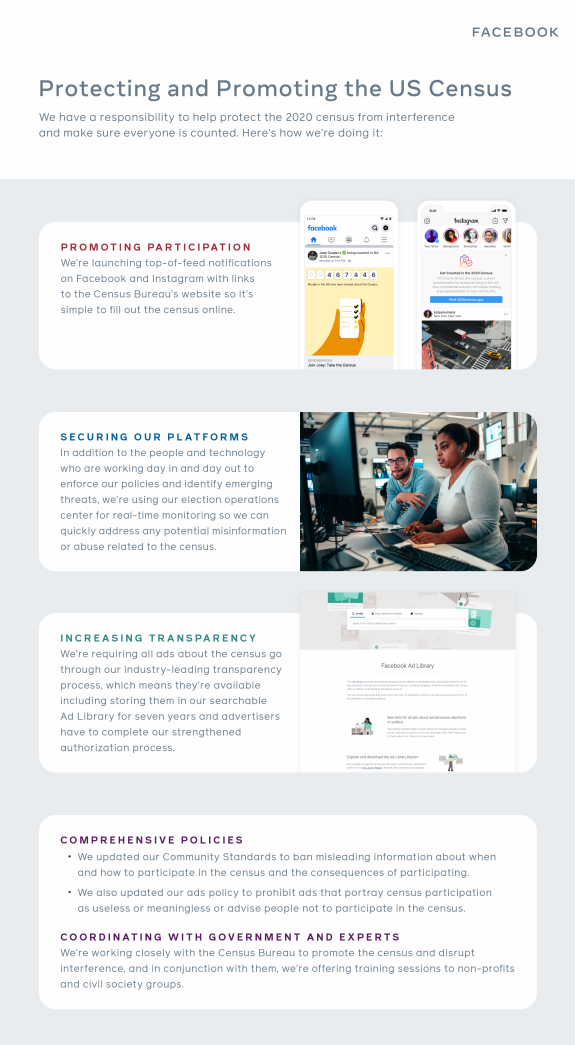 Definitely, as Facebook notes, getting accurate, complete Census data is key, but it's also an interesting experiment in relation to Facebook's advanced election security efforts, and how it plans to tackle similar misinformation and re-direction campaigns in the upcoming US election. As we've seen with the current push against COVID-19 misinformation, Facebook can do more to detect and remove misleading content than it has done in the past - it's even removed some content posted by politicians due to concerns that it could mislead the public.

Will Facebook take an equally tough stance against election misinformation and false reports? And will that ultimately make a difference in how voters respond at the polls?