Facebook Owns the Four Most Downloaded Apps of the Decade

In case there was any question of Facebook's dominance, a new report from app analytics firm App Annie has shown that The Social Network owns the top four most downloaded mobile apps over the last decade. 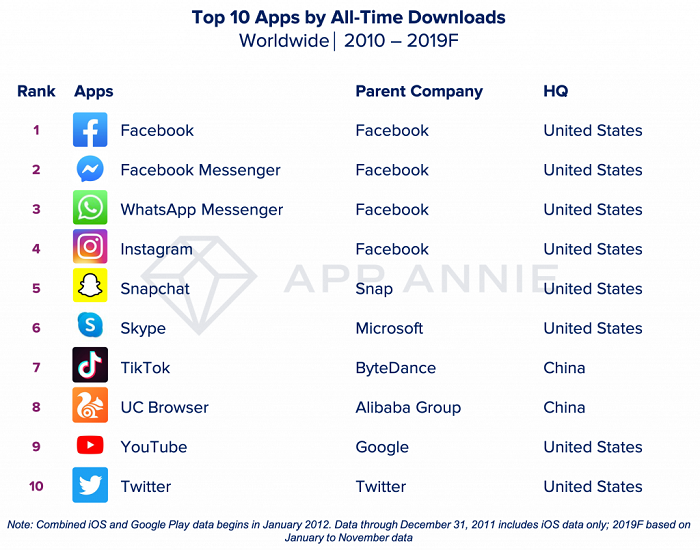 As you can see, Facebook, Messenger, WhatsApp and Instagram lead the way in total downloads for the period. Which is no real surprise, but it is worth noting the company's hold over the mobile market, and the success of its business model and approach over the last ten years.

Facebook has, of course, made various mistakes and missteps in its expansion, and it continues to push ahead with some contentious decisions. But it's tough to fault Zuck and Co's vision and approach. Through clever acquisitions, and improved app offerings, Facebook has built a digital empire, and become a critical component in the day-to-day interactions of many, many users.

The fall of Facebook has been projected many times, but the above chart would suggest that the company is at no risk of losing sway any time soon.

The chart also underlines Snapchat's performance over the last ten years. Snapchat has faced significant challenges, particularly with Instagram stealing its popular Stories format, but its enduring popularity shows that likely it does have the staying power to remain competitive, which is a solid platform for it to build upon. That could also become increasingly relevant as Snap's younger user base moves into older demographic brackets.

The chart also underlines the amazing rise of TikTok, which, while questions still remain, has the potential to become a more significant platform moving forward.

The comparative news is less great for Twitter, though it has still remained within the top ten most popular apps, in terms of downloads. In fact, of these three non-Facebook social apps, Twitter feels like the most established, which hasn't positioned the platform for massive growth, but has helped ensure it maintains its space in the market.

It's an interesting look at the modern social landscape, and the major players in the market. Most of the listed numbers are as you would expect, but still, it's amazing to consider the significance of Facebook's dominance, while also considering which other platforms are most likely to hold on.