Facebook will now allow users to boost their Facebook Marketplace listings, while also enabling businesses to advertise within Marketplace, as part of its first push to monetize the option.

Facebook first introduced its Marketplace tab in late 2016, seeking to tap into the 450 million people who visit buy and sell groups each month. Since then, usage of Marketplace has continued to grow, and now, Facebook’s looking to take the next step, giving the company another tool for monetization – and one which has the potential to become a significant part of their wider revenue generation effort.

First off, on boosted listings – Facebook has started a test in the U.S. which will enable Marketplace posters to get more exposure for their listed items by putting ad budget behind them. The boosted items will appear with a small ‘Sponsored’ annotation.

According to TechCrunch, Facebook has sought to simplify the boosting process by limiting the options available. Users will only need to set their ad budget and how long they want to run the ad for – there’ll be no additional targeting options beyond being shown to age 18+ users in nearby zip codes.

That obviously has its positives and negatives – while simplifying the process could get more everyday people spending a few dollars to generate extra exposure for their listings, the inability to target them could also limit effectiveness. Facebook has said it will auto-optimize boosted items (when people click on the ad, Facebook will show it to similar users as those who’ve shown interest), but the key usage Facebook has highlighted is people who want to sell their items quickly.

In that sense, the lack of targeting could be a benefit too – if someone was leaving town and wanted to move their items fast, they could be selling them very cheap. Even if I wasn’t in the market for a new bike, I might be interested if the price was right.

Really, it’s a bit of a no-brainer for Facebook to offer boosting in this way. It’s easy, cheap, and will help Facebook generate a few extra dollars. It’s not likely to be a big earner, but it’s worth doing either way, and could become more relevant over time.

In addition to this, Facebook will also now allow brands to run product ads within Marketplace listings. 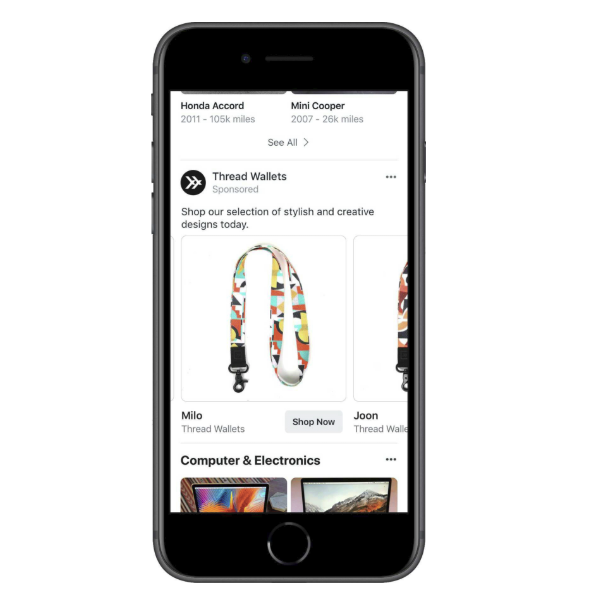 As you can see here, the new Marketplace ads will appear between regular listings, similar to News Feed ads, and will be available through your regular Facebook ads process.

“By selecting Automatic Placements, your ads can appear across our various placement options such as News Feed, Instagram, Messenger, Audience Network and now, Marketplace. Advertising across our platforms enables you to reach your target audience wherever they’re spending time, giving you more opportunities to connect with people likely to be interested in your offerings.”

Facebook’s been slowly diversifying the options available within Marketplace, adding in dedicated sections for cars, rental properties, and most recently home services. All of those have enabled Facebook to essentially add in business ads already, though not in such an overt manner as this new option.

That expanded diversity could eventually lead to Marketplace becoming a much more significant consideration. While Facebook’s focus thus far has, as noted, been tapping into those people using buy, swap and sell groups, the gradual introduction of more product and ad options could see the option grow into a full eCommerce platform, and a way for Facebook to facilitate direct, on-platform buying and selling, without having to go through the regular payment channels and processes.

Over the past year, Facebook’s added a range of in-stream payment options which have focused on peer-to-peer transfer, as opposed to traditional eCommerce transactions between people and businesses. Those processes obviously benefit Marketplace users, as you can easily transfer money between two users, but facilitating consumer to business transactions comes with a lot more complication, and likely regulatory oversight from Facebook. That gets even more complex when transferring payments across borders, in different currencies, etc.

Facebook may be able to avoid much of this by pushing such activity to Marketplace, while in the longer term, Facebook is also exploring how to use blockchain technology, possibly to facilitate a universal payment system, separate from regular transaction channels.

The man in charge of Facebook’s blockchain initiative is former PayPal president David Marcus. You could hardly imagine someone more suited to examining the use of the technology for such purpose.

Given these combined developments, it wouldn’t be surprising to see Facebook’s Marketplace become a far more significant option in future, covering all sorts of transactions and purchase options, direct within Facebook. There’s a long way to go, obviously, but Marketplace could become The Social Network’s next big earner, and the next step in their efforts to assimilate the internet.

Facebook will first allow U.S. users to boost their Marketplace listings, while Marketplace ads are available to businesses in the U.S., Canada, Australia and New Zealand.