New! Introducing https://t.co/q199YM7REf, an experimental new platform for weird and wonderful expressions of who you are and what you love pic.twitter.com/kQldJeXB6h

As you can see here, E.gg enables users to create what it calls 'canvases':

"Free-form mixed media collages/pages that let you express anything from your favorite films/albums/novels to a collage of succulent pics to, say, an about page for an app." 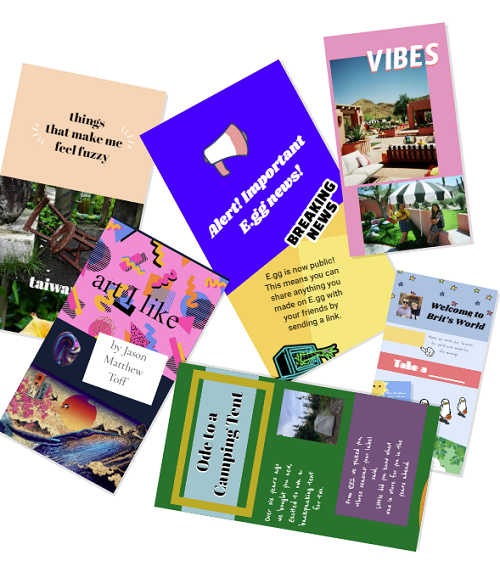 You can add various types of media, re-size and shape them to fit your display, then paste them to your canvas, which you can then share with other E.gg users.

As noted, E.gg was inspired by early web platforms like Geocities and MySpace.

As per Jason Toff, a developer in Facebook's NPE team:

"We stopped short of auto-playing MIDIs (for now), but the *feeling* should be familiar."

And it does definitely have that feel - the question, then, is 'do people really want that in the modern world?'. Sure, these types of presentation tools were great back in the early 2000s, but that was largely because they were all new and fresh, no one had ever been able to create things like this before. But technology has advanced significantly since then, and your presentation options are far more advanced, making options like these cringeworthy for some.

But then again, maybe that's just because its a reminder of my younger years - and maybe, younger audiences who are less familiar with such will warm to the retro appeal of the app. Right now, E.gg is in closed beta, but you can sign up to the waitlist here.

It doesn't seem like the type of thing that will gain any real momentum, but Facebook's NPE team is all about throwing things at the wall and seeing if anything sticks. The team uses emerging app trends to inform its decisions about new directions, then builds apps based on those usage behaviors in the hopes of keeping Facebook ahead of the game.

As noted, this is the tenth app from NPE in the last six months or so - and already, some of those early experiments have been shuttered for failing to catch on.

The NPE experiments thus far have been:

It's interesting, looking at the list, to consider the trends that Facebook's looking to latch onto - which may also be indicative of rising app trends more broadly. Somewhere in there, there may be the basis of the next Snapchat or TikTok, which, of course, is what Facebook's hoping, though most seem fairly limited in scope.

Maybe E.gg is it. Again, it doesn't seem like a major thing, but it could catch on with that kitsch value, and it could become a new trend among user groups.

Or, it gets shut down, another experiment in the books.