With Apple now rolling out its controversial new data tracking prompts as part of iOS 14.5, Facebook has added a new element to its own iOS 14.5 prompts, which now employ a form of scare tactic to encourage users not to switch off data tracking.

As you can see here, Facebook has added a new element to its in-app alerts which encourage people to leave data tracking on in order to: 'Help keep Facebook/Instagram free of charge'.

Which seems like a veiled threat, or at least an empty provocation.

Facebook CEO Mark Zuckerberg has repeatedly stated that the company's apps will remain free, via its ad supported model.

Testifying to Congress in 2018, Zuckerberg explained that:

"Yes, there will always be a version of Facebook that is free [...] We think offering people an ad-supported service is the most aligned with our mission of trying to connect everyone in the world, because we want to offer a free service that everyone can afford. That’s the only way we can reach billions of people.”

So it's not just a philosophical approach, it's actually part of the company's business model - which makes the implication that leaving data tracking on, when prompted by Apple's new ATT alert, could have any influence on such fairly hollow.

But then again, if it can trick a few more people into leaving it active by striking just that little element of fear into their hearts...

The new element was announced by Facebook last week, and has been added into Facebook's original warning screens in relation to the iOS update. 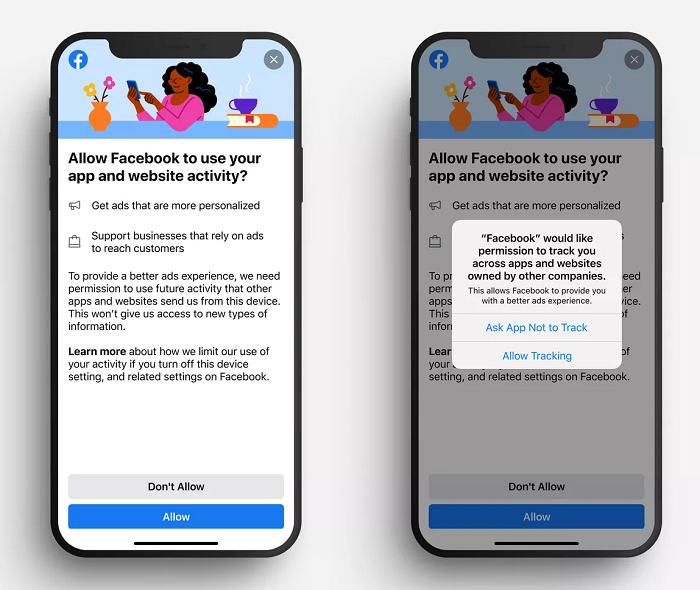 "As Apple has said that providing additional context is allowed, we will show an educational screen before presenting Apple’s prompt to help people make an informed decision about how their information is used. It provides more details about how we use data for personalized ads, as well as the ways we limit the use of activity other apps and websites send us if people don’t turn on this device setting. Our screen also lets people know that they’re seeing Apple’s prompt due to Apple’s requirements for iOS 14.5."

Which again points to this being a fairly empty threat, and it's interesting to see Facebook taking this type of scare tactic approach as it looks to counter the potential impacts on its data tracking, and subsequent ad targeting processes.

Facebook has been loudly opposing Apple's IDFA change for months now, which has included running large-scale, public campaigns to criticize Apple's updated data privacy approach. Apple has countered by noting that users should have the right to choose what data they share with each app, but with reports suggesting Facebook could be among the most heavily impacted by the change, concerns at The Social Network are running high that new restrictions on such data gathering could end up making its ad tools far less effective.

Of course, no one knows exactly what impact Apple's IDFA change will have, because it's entirely dependent on user take-up, and people choosing to opt-out of data tracking. But with Facebook's reputation around data privacy not so great, it is anticipated that many users, when prompted, will indeed cut the company off from tracking their in-app activity.

Which is why Facebook's looking to implement any option it can to keep that data flowing, and while there's been absolutely no suggestion that Facebook could be forced to start charging people for access as a result, that's clearly not stopping Facebook from trying to imply such as a means to keep things steady.

Which could backfire on the company, particularly if people see this as purely a scare tactic.

Indeed, if the company's reputation isn't so great now, trying to bully them with empty threats is probably not likely to help.

But Facebook's trying it out anyway - and again, if it stops a few more people from cutting the company off, maybe it's worth it. But it likely won't do anything to improve Facebook's ongoing relationship with its broader user community.