With more people looking to connect via video tools, Facebook has announced a new option which will enable Messenger Rooms users to also broadcast their Room via Facebook Live, expanding the audience potential of your group discussion. 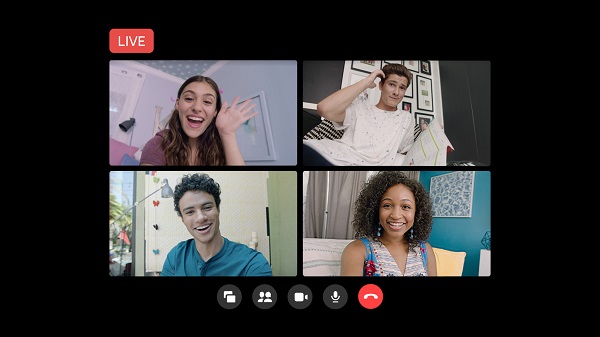 "Turning your room into a Facebook Live broadcast makes it easy to go live with up to 50 people.[...] As a room creator, you can broadcast your room to a Profile, Page or Group, and invite people to tune in. By bringing Messenger Rooms and Facebook Live together, we’re unlocking new ways for people to connect and create content even while they’re apart.

The process, as detailed above, means that you can conduct a Rooms conversation as normal, which allows up to 50 people to join the video chat. You can then further expand the viewership of that discussion by streaming to Facebook Live. Live viewers will not be able to join the Room, they'll only be able to watch and comment via the regular Facebook Live tools. But it could be a good option for hosting panel discussions, interviews, and other events, and reaching more people with your content.

As noted, live video connection is currently the closest thing many people have to real-life social interaction, and that's been reflected in the usage of Facebook Live.

"People are turning to Facebook Live more than ever to stay connected. Live broadcasts from Pages doubled in June 2020 compared to the same time last year, largely attributed to broadcasts since March 2020. From artists raising money for efforts they care about and local zoos hosting daily safari adventures, to congregations coming together for worship and couples exchanging vows, people are finding creative ways to connect through Facebook Live."

These are, again, some of the use cases for expanded Rooms broadcasting, essentially enabling multiple live-stream guests on a single stream.

Facebook actually re-added its single live-stream guest option back in April, after removing it in December due to low usage. Now, you'll be able to add up to 50 guests to your stream, which is a significant upgrade of the option, and will no doubt prove popular with many users.

Room creators will be able to broadcast their room to a Profile, Page or Group, and invite people to tune in.

"All the room participants will receive a notification inviting them to join the live broadcast and will have to opt in to participate. They can also choose to leave the room before it goes live."

It's an interesting option, which opens up a range of considerations for marketers and promoters, especially given the inability to host similar live, in-person events in most regions. Using Facebook's reach, your broadcast could be seen by a lot more people than a live-stream on pretty much any other platform, and Facebook Live streams generally prompt more engagement and interaction than any other post type on The Social Network.

Adding more participants could also lessen the intimidation factor of live-streaming. Talking to a camera, in an otherwise empty room, can feel a little strange, but talking to a group of friends or colleagues might make it easier.