With Facebook working to make WhatsApp a more all-encompassing tool for business and personal use, it's also looking to provide more promotional tools for brands on WhatsApp, in order to raise awareness of their connection options via message.

But there are no ads in WhatsApp, given ads in direct messaging threads have proven to be an unpopular option (and ads in WhatsApp Status have also been canned). So instead, Facebook's looking to provide a new option for businesses on WhatsApp which will enable them to create Facebook promotions within their WhatsApp business tools, that then link back to their WhatsApp presence, tapping into the combined popularity of the two platforms. 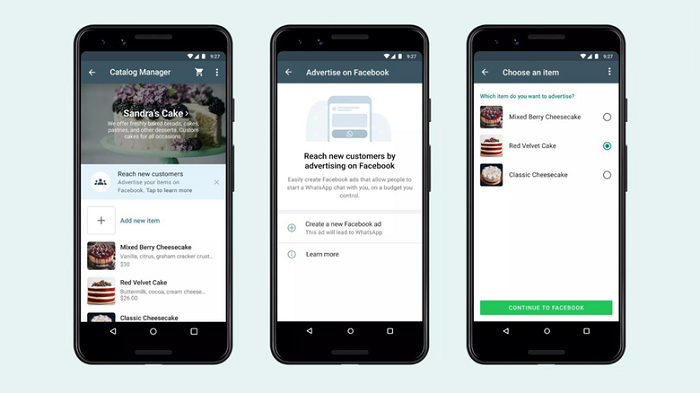 To be clear, brands have long been able to create Facebook ads that link back to WhatsApp, they've just had to go through Facebook's Ad Manager to do it. The new process, as you can see in this sequence, will provide that same functionality within WhatsApp itself, which is a significant advance for the platform's promotional tools.

As explained by CNN, the process will make use of WhatsApp Business catalogs, in order to source product information for Facebook promotion.

"Business users will now be able to select an item from their catalog and quickly turn it into a Facebook or Instagram ad with a button directing viewers back to their WhatsApp profile."

That will effectively open up new cross-promotional potential for businesses on WhatsApp - though its value, of course, will be limited to how many people within your target market are using both apps.

Which, in most western nations, is a lot. For example, WhatsApp reportedly has around 70 million users in the US, while Facebook has more than 200 million, so the crossover between the two would be significant. But in India, it's a slightly different story.

WhatsApp is hugely popular in the Indian market, with some 459 million active users, while Facebook, by comparison, has 320 million Indian users. That's still enough to make India Facebook's biggest user market, but that also means that a lot of Indian WhatsApp users are not reachable via Facebook.

Facebook, ideally, would like to capitalize on the popularity of WhatsApp with its new business tools in the Indian market specifically, but this new cross-promotional process may not provide the ultimate answer on this front.

But still, it's another tool for promotion, which will help to drive more people to your WhatsApp presence. And if your audience sees high take-up on both apps, it could be a good way to boost your WhatsApp business process, and as the app's eCommerce tools continue to evolve, that could become a more significant consideration.

Already, according to Facebook, more than a million businesses are using click to WhatsApp ads on Facebook, so there's clearly a demand, and it may well be a powerful promotional opportunity to add into your digital marketing mix.

Facebook says that the new option will be launched soon.