While the COVID-19 pandemic has been hard on everyone in different ways, the global lockdowns and mitigation efforts have accelerated the usage of digital platforms for social connection, shopping, work - basically every function in some form.

One of the key beneficiaries of that has been VR, which has seen a surge in popularity as people look to alternate forms of home entertainment.

Indeed, in Facebook's most recent performance update, the company's ‘Other Revenue' figure (i.e. revenue not generated from ads) was more than double the same period in 2019. 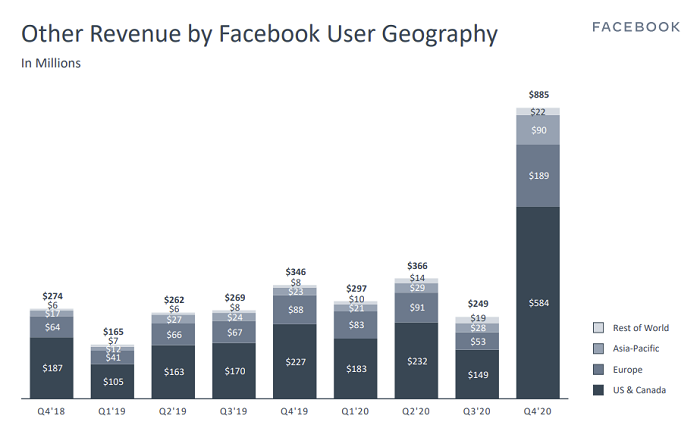 Facebook CFO David Wehner specifically noted that this increase was largely due to strong sales of its Oculus Quest 2 VR device over the holidays.

The Quest 2 could end up being a transformative evolution for VR - a standalone VR headset with updated control options, improved, simplified set-up and advanced graphics capabilities. And with the increased attention now being focused on VR, we're starting to see more developers take note, as they look to the next stage of digital connection.

This week, Oculus VP of Content Mike Verdu has shared a new update on the growth of the platform - and in particular, the growth of content, which is really the key element at this stage. Solid VR devices are now readily available, but without significant, relevant games and entertainment options, the reasons for buying in have been limited.

"At Facebook Connect [back in September], we shared that over 35 titles on the Quest platform had generated revenue in the millions. About four and a half months later, that number is now more than 60 titles generating revenue in the millions, nearly twice as many as a few months ago. Put another way, that’s one in three paid apps on our store making over $1M in revenue." 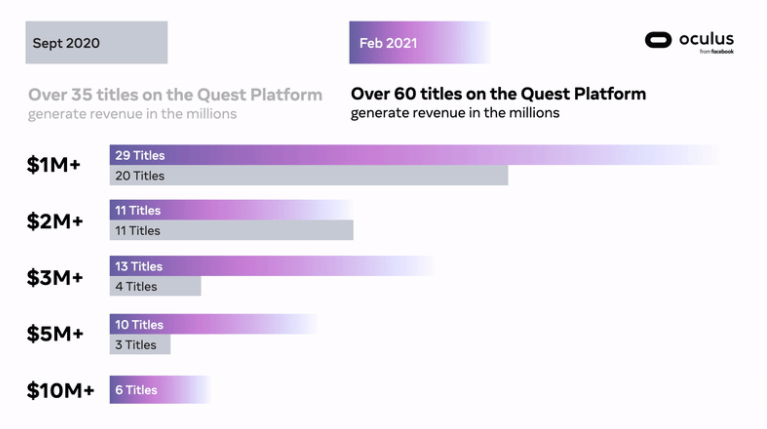 Increased consumer spend attracts more development interest, and as you can see, over time, the Oculus content library is growing, as is the money each is generating.

Verdu also highlights some of the top performers on the platform thus far:

These big games are helping to lead the way on the next stage for VR content, which could have big implications, not only for gaming - which is massive in itself. But once people have a VR headset in their homes, there are also further applications and tools they can utilize, which are also in development.

"More people are connecting and interacting with their friends in virtual reality, and we’re seeing higher social interaction and more concurrent play as people jump into games and experiences where they can be together."

Verdu notes that fitness apps like Supernatural and FitXR have seen big growth, broadening the use case for VR, while interest is rising in Facebook Horizon, its social platform within the VR space. There are also expanded applications for VR connection in the workplace, which will also see increased usage amid the ongoing WFH shift.

That capacity will be further expanded by the integration of Messenger into the Oculus experience, enabling users to chat via Messenger within the VR environment.

"With this update, you can choose to chat with your Facebook friends anywhere they have Messenger, even if they’re not in VR. You can reach them without taking off your headset - and they can chat with you too. And if you’re chatting with your friends in Messenger and decide you all want to play together, you can easily create an Oculus Party so you can jump in and play the same game together. "

The integration adds another element to the Oculus realm, which will further boost engagement and interaction, making it a more compelling, connective experience.

The progression here points to an important, significant shift, which all digital marketers should be taking note of. No, VR is not going to become the next key consideration overnight, and it's still some way off mass adoption and usage.

But it is growing, its applications are rising, its potential is expanding more and more over time.

As noted, we may be on the cusp of the next big shift in digital connection. And that could open up a range of new opportunities.