Could this be another victim of Apple’s iOS data tracking change?

Meta is quietly changing the way that it uses Location Services in Facebook, with the depreciation of several local-based functions in the app, including Nearby Friends, weather alerts and Location History.

As you can see in this example notification, shared by social media expert Matt Navarra, users are now being alerted to the update in their Facebook notifications stream.

In a more detailed explanation of the change, Meta says that these services will no longer be available after May 31st, 2022, at which point, Meta will stop collecting the information used to power these elements, even if you’d previously enabled them. Meta says that all of your previously logged information relating to these functions will be deleted on August 1st.

We asked Facebook for some more insight into the shift, and it provided this statement:

“While we're deprecating some location-based features on Facebook due to low usage, people can still use Location Services to manage how their location information is collected and used.”

So low usage is the cause – people don’t really care about these features, so Meta’s removing them.

Makes sense – but then again, Meta’s not known for giving up user data so easily, and it seems unlikely that it’s simply chosen to depreciate these additional insights of its own accord.

It could be that it will help Meta reduce the size of these notifications, which are now shown to all Facebook users on iOS. 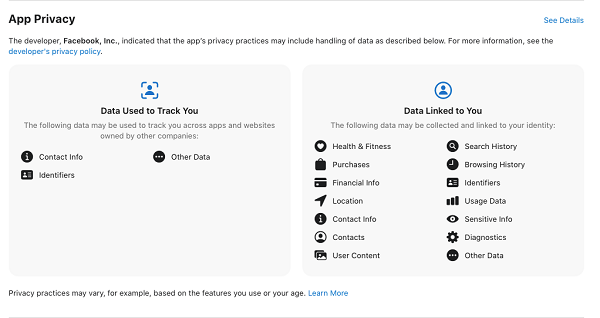 Maybe, with the removal of these less essential data tracking tools, Meta can scratch some of these elements from the ATT prompts, which will then make people less likely to switch off data tracking entirely.

Or maybe, it has to do with ever-increasing data privacy regulations in Europe, and the way in which the trends are headed on such.

Late last year, it was reported that Facebook had started using device accelerometer data as an alternate means of pinpointing user location, even if a user had opted out of location tracking via Apple’s ATT update. Because the accelerometer is used for alternate purposes than device tracking, Facebook engineers had apparently found a way to use that information to match up location info, even when a person had told the app to stop tracking them, and maybe the company is now under pressure to end that practice also, as a kind of workaround to avoid the restrictions of the Apple change.

Meta and Google have both faced significant fines over user data tracking, and maybe a new push is now growing to limit Meta’s efforts to subvert these measures, which is why it’s getting on the front foot and removing the options entirely now, ahead of any legal challenges.

Or it could be as Facebook says – people don’t really use these services, and they’re more of a headache than they’re worth, given these ongoing changes.

Whatever the reason, Facebook is about to lose another swathe of data, which it could use to power its almighty ads platform.

Again, it seems unlikely that Meta would do this voluntarily, but we don’t have any further info as to why it’s making this move now. My guess would be that new regulations are coming soon, which will clarify this.