As part of its ongoing effort to phase out third-party cookie tracking, and replace it with a new, privacy-friendly data insights process for web publishers, Google has today announced a shift in its approach, with a new topic-based structure now being proposed to both protect user privacy and facilitate publisher insight.

The new process will replace Google’s FLoC, or ‘Federated Learning of Cohorts’ process, which it had been working on to replace cookies.

“With Topics, your browser determines a handful of topics, like “Fitness” or “Travel & Transportation,” that represent your top interests for that week based on your browsing history. Topics are kept for only three weeks and old topics are deleted. Topics are selected entirely on your device without involving any external servers, including Google servers. When you visit a participating site, Topics picks just three topics, one topic from each of the past three weeks, to share with the site and its advertising partners.”

So instead of providing more specific insight on individual user behaviors and interests, Google would enable advertisers and publishers to utilize topics for tracking, protecting user information while also catering to third-party data needs. 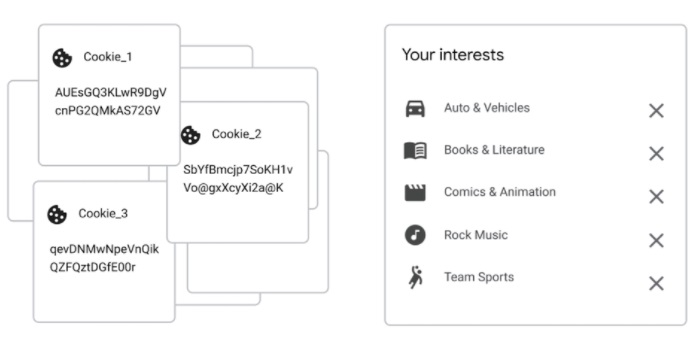 Which makes some sense, though there are some provisos that will need to be ironed out before Google takes its topics approach live.

For one, Google says that the topics list would be limited to around 350 topics “to reduce the risk of fingerprinting”. Which would indeed ensure enhanced privacy, but if Google was to increase the number of topics, that could become problematic, enabling more specific, and potentially discriminatory targeting based on these elements.

For its part, Google says that its list of topics is “thoughtfully curated to exclude sensitive categories, such as gender or race”. So it should cover off on any such concerns, but still, the more options available, the more specific targeting can get, which may not be a significant enough improvement on current data privacy processes.

Another key question, much like Apple’s ATT update, is whether Google itself will be bound by the same tracking limitations as its customers.

Evidence suggests that Apple is not limited by the same data-privacy requirements as the apps that utilize its network, and with Google having direct access to the raw response data, it too would be able to use that as a market advantage, improving its own position.

That’s the basis of several current legal challenges to Apple’s ATT update, and indeed Google’s own plans, with publishers claiming that the shift to phase out external data-tracking is in violation EU law, on antitrust grounds.

The legal technicalities could change the approach from both entirely, and it is interesting to note what limitations Google will or won’t put on itself as a result of this proposed change.

From a user standpoint, Google says that Topics would give people more control over their online experience, as it will be more transparent than cookies.

“And, by providing websites with your topics of interest, online businesses have an option that doesn’t involve covert tracking techniques, like browser fingerprinting, in order to continue serving relevant ads.”

It is an interesting proposal, which does appear to cater to both users and publishers, and facilitate ongoing ad targeting in a post-cookie environment. But there are some intricacies that we’ll need to see more detail on before we can assess the full viability of the option.

But ideally, eventually, the proposal will enable advertisers to continue using more advanced online targeting, as opposed to cutting them off completely, and reducing the effectiveness of digital ads.

You can read more about Google’s new Topics proposal here.