The 2018 World Cup is over, with France taking out the title. And with the event itself now complete, we can look back at the surrounding discussion, and the popularity of the World Cup across social platforms, in order to get some perspective on the popularity of both the event, and the sport, to better inform future marketing campaigns.

And there was certainly a lot of discussion to be had - according to Facebook:

Those are compelling stats outside of the World Cup, but the surrounding discussion from the event further underlines the popularity of soccer (or football, depending on where you're from) across the two platforms.

First off, on specific players and teams - Facebook has listed the top five in each category, based on platform mentions. 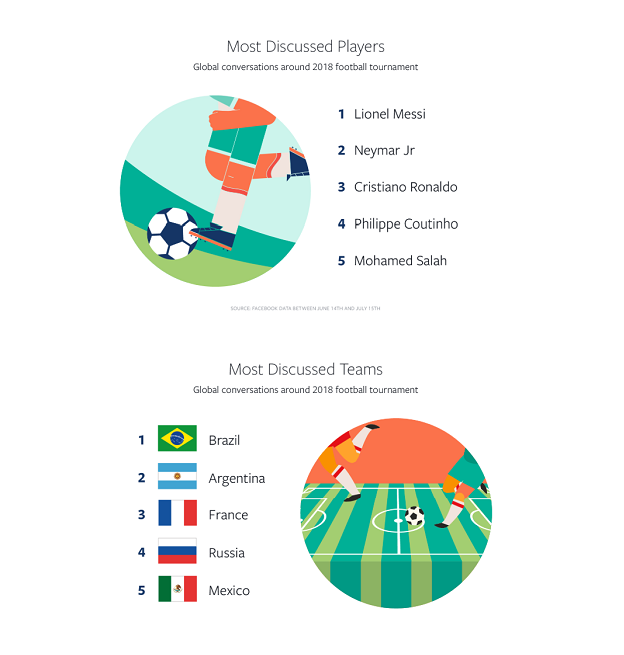 Most of those would come as little surprise to soccer fans - though I suspect Neymar may have got a few more mentions than normal due to his animated responses to various types of on-field contact.

As an interesting addition to the data, Facebook has also included a listing of how many Stories were created around the World Cup, along with popular hashtags and overall discussion.

Facebook has repeatedly stated that 'Stories are the future of social sharing' and are on track to overtake the News Feed as the primary social sharing surface sometime this year. The inclusion of Stories-specific data seems to point to this again, and it'll be interesting to see if Facebook includes similar insights for future events.

The stats further underline the potential of both Facebook and Instagram for sports-related businesses, and may help get you thinking about how you can incorporate them into your promotional strategy. While the World Cup is a special event, the numbers here show that soccer remains popular on both platforms, and that sports, in general has a significant place within the broader discussion.