Instagram Is Testing the Capability to Restrict Multiple Accounts at Once

After first launching its 'Restrict' option to help users better manage their comment streams last October, Instagram is now testing a new process which would enable people to Restrict multiple users in one action, direct from their comments listing. 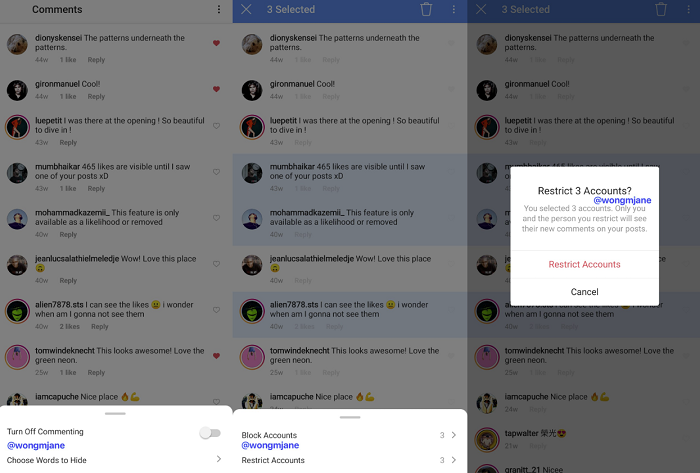 As you can see in this example, which was shared by reverse engineering expert Jane Manchun Wong, the new process would enable users to select multiple comments from their stream, then Restrict the relevant users in one hit.

As noted, Instagram's Restrict mode provides another way to manage your post comments, and weed out offensive or unwelcome commenters from your stream. Once you've chosen to Restrict an account, comments on your posts from that profile will only be visible to them, while you'll have the option to view each comment and approve, case-by-case, if you choose.

Having the capacity to Restrict multiple users in one hit could be helpful for those that see a heap of unwanted attention in their comments feeds, keeping the discussion on track, and civil, in order to facilitate better engagement.

Restrict is also a less confronting way to limit the impact of trolls and abusers. Because the restricted account doesn't know that others can't see his/her comments, they could be less inclined to keep posting such, because they're not seeing the reaction they would like.

It seems like a good move for Insta, which would be valuable for a lot of users. Instagram has confirmed the test, but there's no word as to a proper roll-out at this stage. But going on Wong's previous discoveries, you can expect to hear more by about April.