According to LinkedIn, its users are around 60% more likely to engage with content from their coworkers on the platform, as opposed to other connections that they don't work directly with. Catering to this, and in line with the platform's ongoing efforts to boost engagement, LinkedIn is adding a new option called 'Teammates', which will enable users to prioritize updates from their immediate connections and have them appear higher in their feeds. 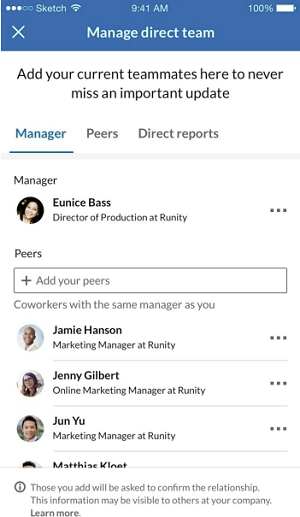 "Simply visit 'My Network', and look to the left panel. If the feature is enabled for you, you should see the text “Add Teammates,”  where you can specify your manager, peers and/or direct reports. From there, we’ll prioritize updates in your feed about your team’s activity on LinkedIn, such as posts, comments, likes, shares, and work anniversaries."

The tool looks to replicate an internal network on LinkedIn, which seems a little strange - but then again, as LinkedIn notes, with users significantly more likely to engage with such updates, it makes sense for LinkedIn to prioritize them.

A question does have to be asked, however, why such a change is necessary. If LinkedIn knows that you're 60% more likely to engage with certain updates from a certain user (or users), why doesn't the feed algorithm just prioritize their updates automatically, rather than requiring manual input? I mean, ideally, more control over your feed is better, but if an algorithm is going to be in place either way, why does LinkedIn need you to tell it how it should work?

At present, there are some limitations on the process.

"You can currently add your manager, peers, or direct reports. We hope to expand team roles to include other coworkers and important professional relationships in the future. Note: You may get an error message saying you’ve reached the limit when you’re trying to add a new member to your team. You’ll first need to free up space by removing an existing member (for example, you can only have one manager at any given time, so you’ll get an error message if you’re trying to add an additional one)."

It's not 100% clear what the connection limits are, beyond having only one manager, but as noted, LinkedIn is looking to expand the available options over time.

As per who you can become teammates with, specifically, LinkedIn provided us with this explanation:

"At this stage, members will only be able to add colleagues with the same company listed as their own, however we are working on expanding this to support parent companies, subsidiaries, and related companies which should roll out later this year."

This is an important element - there may be instances, for example, where a person might work for a different organization, but on the same projects as other LinkedIn members, and such connectivity could be equally beneficial. The risk of enabling expanded connection of this sort, however, is that it could also be used as an algorithm workaround - influencers, for example, could call on their followers to add them to their 'Teammates' list, even if they're not colleagues, in order to ensure more people stay in touch with their updates.

That could be another 'tactic' that this brings to the fore - that's not the aim, but again, it highlights the potential problems with enabling selective alteration of the algorithm process.

Either way, it's an option to consider - if you want to make sure you never miss an update from your co-workers on LinkedIn, now you can add them to the priority list.

Teammates is being rolled out over the coming months in the U.S. on both desktop and mobile, with global availability coming shortly after.