LinkedIn Now Factors 'Dwell Time' Into Content Distribution Algorithm, Which Could Be Bad News for 'Broetry'

LinkedIn has this week published an overview of its new 'dwell time' metric, which is now being factored into its feed algorithm, which defines what each user sees on the platform.

Dwell time, as it sounds, calculates how long a LinkedIn user spends looking at an update or link.

"At a high level, each update viewed on the feed generates two types of dwell time. First, there is dwell time “on the feed,” which starts measuring when at least half of a feed update is visible as a member scrolls through their feed. Second, there is dwell time “after the click,” which is the time spent on content after clicking on an update in the feed."

Facebook uses a similar consideration in its infamous News Feed algorithm, factoring in how much time each user spends on a piece of content, which then, based on what they spend time with, infers to the system that the user is interested in more or less of the same. That then helps to dictate order of the posts that you see.

LinkedIn says that it conducted a range of tests to determine if there was a definitive point at which dwell time was indicative of user interest - i.e. is there a blanket threshold at which dwell time would suggest that the user will never click through or engage with certain posts.

LinkedIn's engineers found that there was, and interestingly, that it was fairly universal across all forms of LinkedIn updates. 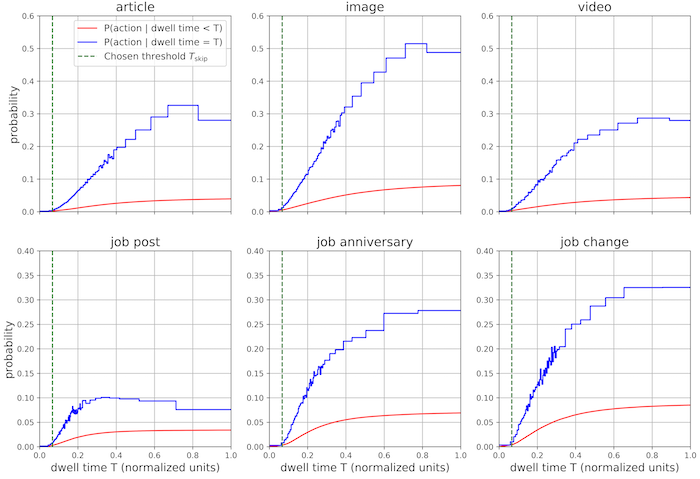 As such, LinkedIn has now built its dwell time metric into its feed algorithm. So if you want to maximize your post reach on LinkedIn, you should consider how you grab people's attention, and keep it for as long as possible. Which is pretty generic content advice anyway, so it's not really a major revelation or strategic update.

But it may have another impact, and if you're a connoisseur of the 'broetry', you could be impacted.

Back in February, when LinkedIn CEO Jeff Weiner announced that he was stepping down from his role, his incoming replacement, Ryan Roslansky, noted that he dislikes the broetry posts on the platform.

For the uninitiated, broetry posts on LinkedIn are those updates with spaces between each line, spreading the text for as long as possible down the screen (example via Ryan Mac) 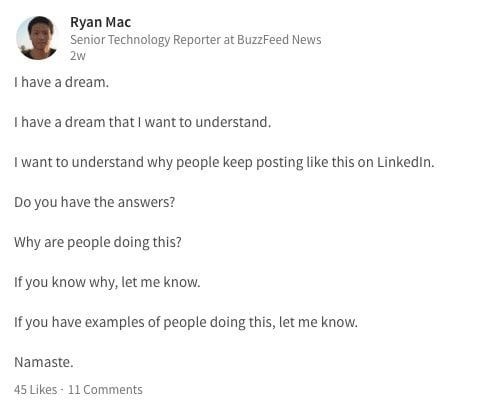 The idea here is that they lure clicks - with the text so widely spread out, users only get to see the first line or so in the in-feed preview, so they have to click/tap on the 'See more' prompt in order to understand what the full post is actually about.

That click has, up till now, been a key factor in determining algorithm reach, which LinkedIn notes in its overview of dwell time.

"We train our machine learning models to predict several quantities for each possible click and viral action (click, react, comment, share). The outputs of these models are then synthesized into a single score using a weighted linear combination. Finally, this score is used to perform a point-wise ranking of all the candidate updates."

So clicks - as well as reactions, comments and shares - are key definers of user interest in a post in LinkedIn's system, which then determines what they see more of in future. As such, broetry is probably a good tactic, as it sucks in clicks - it's essentially a clickbait strategy. But maybe, with dwell time, that won't be so significant anymore.

"Clicks are noisy indicators of engagement. For example, a member may click on an article, but quickly close out, realizing it’s not relevant, and return to the feed within a few seconds. We call these “click bounces”.

If LinkedIn wanted to de-emphasize broetry, now it can - it could reduce the value of clicks, and up the value of dwell time instead.

Given Roslansky's noted dislike of broetry posts, and the fact that LinkedIn has a name ('click bounces') for this type of less beneficial user engagement, I'd hazard a guess to say that's exactly what its doing, which will mean fewer broetry posts, and more content you actually spend time reading.

As such, in terms of strategic pointers, this update may be less about what you should post - as you should be posting stuff that grabs attention and sees ongoing engagement anyway - and more about what you shouldn't. Click bounces are likely not what LinkedIn wants to emphasize, so luring clicks, in itself, should not be a consideration in your approach.

No more broetry. Will LinkedIn ever be the same?