Pew Research has published a new report which looks at key trends and traits among US Twitter users, and how they relate to the wider population.

And the insights, gleaned from a survey of more than 2,791 adult Twitter users, reveal some important points of note for marketers - to start with, according to the data, the majority of Twitter users are 'lurkers' - i.e. they read tweets but don't often post themselves. 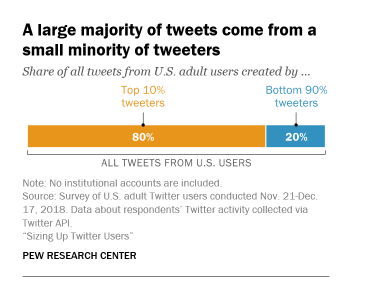 This is likely why Twitter is continually rolling out new tools to prompt more engagement - while having people come to the app at all is a good thing, having more people actively participate is key to making that usage sticky and keeping users around.

From a marketing perspective, this could underline the potential of influencer marketing on the platform. With a relatively small amount of users actually tweeting, that means there are a lot of users simply tuning in, which indicates that those top tweeters have a captive audience that's ready to listen.

It might also confuse Twitter's on-platform stats a little. While users can buy likes, its much harder to fake actual engagement, which has seen replies become a better measure of actual influence and activity in some respects. If the vast majority of Twitter users aren't actually tweeting, that makes actual engagement a little harder to measure in this respect.

Interestingly, Pew's data also shows that the most active Twitter users are more likely to be women - and crucially, this small minority is much more likely to tweet about politics. 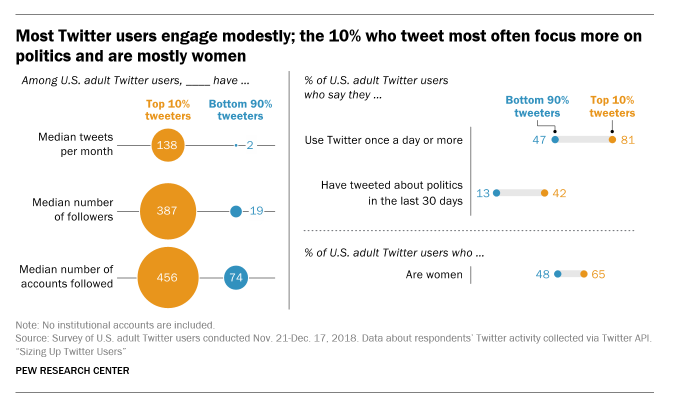 That suggests that those top tweeters have a significant influence over the political discourse on the platform - which is probably no surprise, but it means that a relative few are guiding such discussion. That could make it easier for bad actors to shift such narratives through specific targeting of such users.

Interesting, too, to note the relatively small amounts of accounts followed, and followers, for Twitter users listed here. The top accounts have thousands, even millions of followers, which, this would suggest, may skew opinion on what 'influential' actually means on the platform. Maybe those people with fewer than 500 followers are driving more of the discussion than you think.

Unsurprisingly, Pew's researchers also found that the majority of Twitter users are from higher socio-economic status, both in regards to income and education. 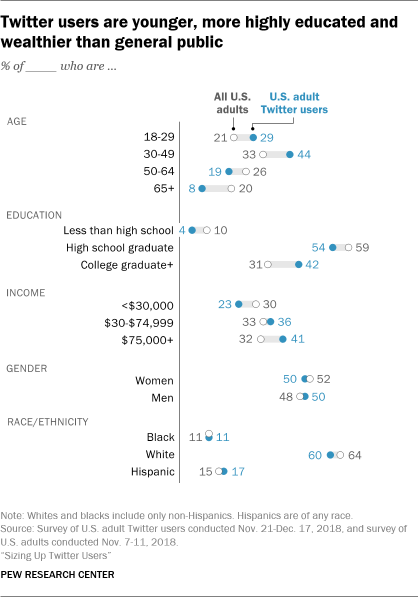 Various past studies have found the same - which makes sense, since, in order to have the time and means to tweet, you need to be in a position where you can not only afford access to the relevant devices, but also, to have the capacity to be scrolling through and engaging in such activity. If tweeting is a priority for you, you're probably doing okay on these fronts (while it's also no surprise that higher educated people are the ones most keen to share their thoughts and opinions with the world).

In addition to this, Pew's researchers also looked at the pervading political beliefs among Twitter users.

"A larger share of Twitter users – who are more likely to identify as Democrats relative to the population as a whole – say that blacks are treated less fairly than whites (64% of Twitter users vs. 54% of Americans). They are also more likely than the U.S. general public to say that immigrants strengthen the U.S. (66% vs. 57%) and that barriers exist in society that make it harder for women to get ahead (62% vs. 56%)."

Those more progressive viewpoints likely point to Twitter's younger audience, but it is interesting to note the evolving perspective of Twitter users more generally, particularly from a marketing standpoint. If you're looking to reach these users, you need to understand their perspective, and what types of communication work best with these users.

Interesting too - Pew found that Twitter users are also "somewhat less likely to report being “very attached” to their local community (12% vs. 17%)".

There are some interesting points to consider here - most are not highly surprising, but still, if you're looking to maximize your use of the platform as a marketing and outreach medium, it pays to know what resonates, how Twitter works, and who you should be connecting with.

There are more insights, particularly on political leanings, in the full Pew Research report, which you can check out here.