New Report Highlights the Importance of Brand Awareness in SEO

The links between social media marketing and SEO have long been debated, and while there's no definitive connection between the two (Google, for example, doesn't factor in Likes and shares on social platforms when ranking pages), social platforms do facilitate content sharing, and help drive traffic - there are various key SEO elements which are very much directly influenced by social media activity.

And now there may be another consideration in this. According to a new report from Red C Marketing, based on eye tracking of over 400 search journeys, 82% of consumers will select a brand that they're already familiar with in search results, regardless of that brand's actual ranking within the SERP.

As noted by eConsultancy:

"The study’s findings lend a new weight to the importance of brand trust, brand recognition, advertising, and other off-site factors when it comes to winning clicks on the search results page."

Essentially, by utilizing social media, and other digital marketing platforms, to help raise brand awareness, you may be helping to influence search behavior, regardless of Google ranking.

There are a couple of key provisos within this - the first being that users in different life stages and age brackets behave differently in this regard.

For example, younger, pre-family participants are the most likely to choose a familiar brand in their search, with 91% making a selection based on familiarity, not on SERP rank. Older users - people with families of their own - referred to the familiar at a slightly lower rate (84%), while the darkly titled 'post-family' cohort were most influenced by search rank, with 67% of them opting to choose a brand they knew ahead of other considerations.

Of course, the idea of Google's advanced algorithm is that it will show you the most relevant results based on your query - which, in all likelihood, will highlight the most familiar brands at the top of the list anyway. But not always.

As noted by Red C:

Brand familiarity is important, and may be even more so among younger users. Could that be because more digitally-savvy consumers are increasingly aware of ads and promoted content, and know that the top Google matches are not always the most relevant? Or could it be that younger users are simply using other mediums, like social media, more often, and are therefore choosing the businesses that they're increasingly familiar with based on exposure through these platforms?

Definitely, an argument could be made that by boosting your branding efforts across these platforms, you're increasing your chances of drawing search clicks. With so much additional brand discovery behaviors being conducted on other surfaces, users are less reliant on Google simply telling them where to look.

That's somewhat reflected in the reasons for people clicking on familiar brands in this chart. 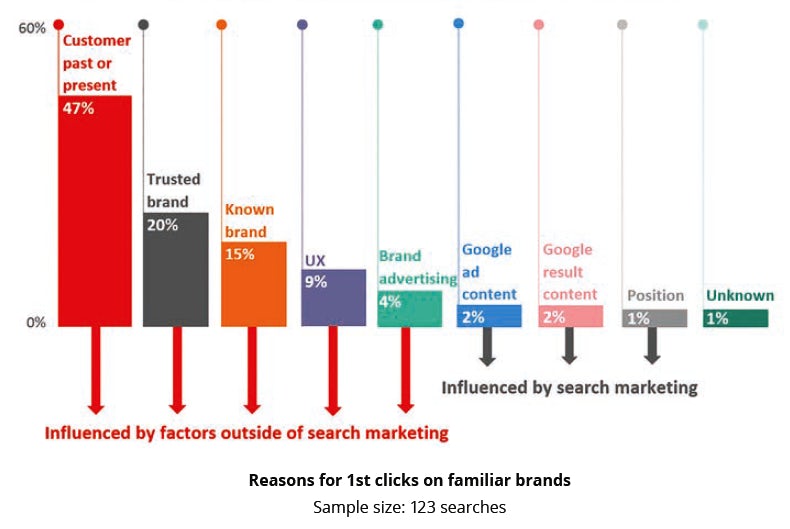 Being a past customer is a key factor - and various studies have highlighted the value of retaining customers vs. winning new ones. But the next elements are of most interest - 'Trusted brand', 'Known brand'. Those two factors are well ahead of all others when it comes to drawing familiarity response.

How do you build trust with potential consumers? How do you increase brand awareness? Social media is used by billions of people worldwide, at ever-increasing rates. Ensuring you adhere to common SEO practice remains absolutely key in maximizing your digital marketing performance, but this report highlights the need to also tap into where consumer attention lies in order to boost awareness, familiarity and affinity.

The social/SEO connection, again, may not be direct, but definitely, social media marketing can help improve search performance - even when not directly optimizing based on SERP ranking.

You can read Red C's full 'The Secret Life of Search' report (with e-mail sign-up) here.