How many hashtags should you add to your Instagram posts to maximize engagement?

The advice varies – previous studies have shown fewer is better, while Instagram itself says that you should look to add 3 to 5 highly relevant hashtags to reach the right communities.

Really, as with all things social media, a lot of it depends on your specific audience and focus. But adding a little more consideration into the mix, the team from Later recently conducted an analysis of more than 18 million Instagram feed posts, specifically (not including video, Reels or Stories) in order to measure optimal hashtag usage for driving engagement and reach.

Their key finding? More hashtags is definitely better, on both fronts.

First off, on reach – Later’s study shows that posts with 20 hashtags see the highest average reach rate, while those with 30 hashtags are not too far behind. 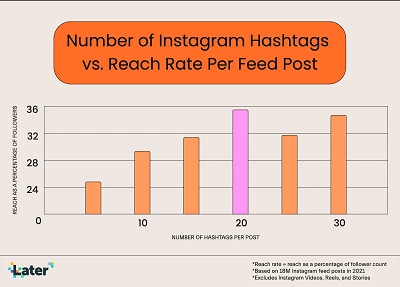 That’s consistent with Later’s previous research, as you can see in this comparative graph. 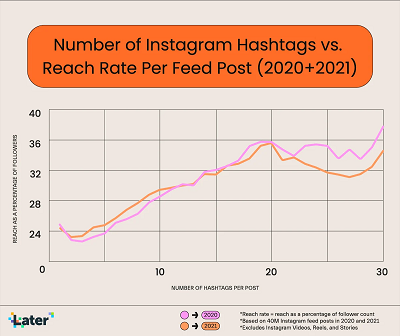 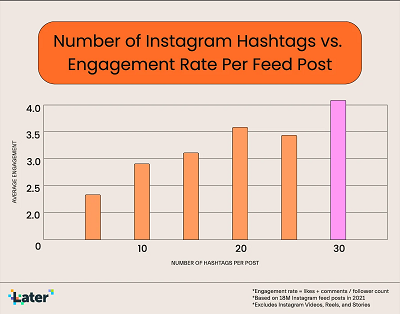 So, in opposition to Instagram’s own advice around more limited hashtag use, Later’s study actually found that more was a lot better. Which makes sense, with respect to maximizing discoverability by getting your posts into more Explore feeds and listings. But it can also make your posts look more cluttered – though the insights here would suggest that this is not as big a consideration for users as it could seem.

So what should you go with? Well, there’s no definitive answer, as, again, it will largely come down to your unique audience and what they respond to, and what you’re trying to achieve with your posts.

If you’re trying to connect with very niche communities, it may well be that fewer hashtags is better, as the interest you might potentially get from broader tag use might not result in actual traffic for your site. But then again, maybe more is better, as broader reach would mean that you’re increasingly likely to get your updates in front of more of the right people, even if you reach more uninterested users as well.

It’ll require experimentation to determine what works for you – and as evidenced by the varying recommendations, there’s likely no one right answer for all. But in this instance, based on a broad range of feed posts (again, not including video, Reels or Stories), it would appear that more is better for engagement.

It could be worth testing, and examining your own results - and if you’ve avoided adding too many tags in the past, maybe you don’t need to hold back as much.