In a discovery that's both unsurprising, yet informative in the same way, a new report from Reuters Institute has found that celebrities and politicians have played a key role in spreading COVID-19 misinformation on social media, even though their relative share in the discussion is very small, compared to overall conversation.

The Reuters team studied 225 social media posts that were published between January and March​, and have been rated as either 'false' or 'misleading' by fact-checkers. Based on this dataset, the researchers sought to discover how misinformation is spreading on social, what types of misinformation are being shared, and how the platforms themselves are responding.

Here's what the data shows:

First off, the Reuters team found that the most common type of COVID-19 misinformation being shared is 'reconfigured' material - or essentially, a twisting of the truth, as opposed to an outright lie or misunderstanding.

The Reuters team provided this example of reconfigured content:

"One very widely shared post offered medical advice from someone’s uncle, combining both accurate and inaccurate information about how to treat and prevent the spread of the virus. While some of the advice, such as washing one’s hands, aligns with the medical consensus, other suggestions do not. For example, the piece claims: ‘This new virus is not heat-resistant and will be killed by a temperature of just 26/27 degrees. It hates the sun.’ While heat will kill the virus, 27 degrees Celsius is not high enough to do so."

Reuters also notes that false content - like images being labeled as something they are not - also falls into the 'reconfigured content' category, as do manipulated images - though the researchers do note that they found no examples of deep fakes in their sample set, despite more recent concerns about the rise of digitally altered content. 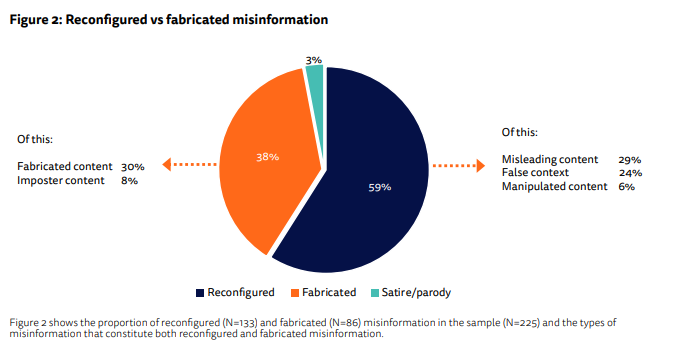 ​As you can see here, reconfigured information accounted for around 59% of all the misinformation being shared, which, in some ways, is positive, considering its likely a less damaging aspect of false COVID-19 info.​

But still, misinformation that has been completely fabricated made up 38% of the posts in the set. These posts are deliberate, focused efforts to share discredited, debunked and misleading info, which can have major consequences, which is why every platform has been upping its efforts to remove such posts from their networks.

In terms of how this type of misinformation is being shared, the researchers found that high-profile users play a key role in both validating and circulating false claims.

Various celebrities, politicians and other public figures have re-shared hoax theories and misleading information - for example, actor Woody Harrelson recently shared a post which outlined the widely discredited theory that 5G transmission towers have contributed to the spread of COVID-19. 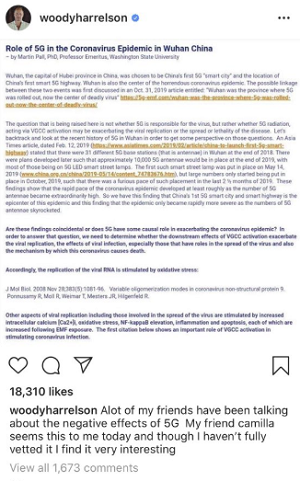 As with influencer marketing, the reach and standing of these public figures significantly amplifies their messaging. As a result, the Reuters team found that posts from high-profile users accounted for 69% of the total engagement with misleading reports. 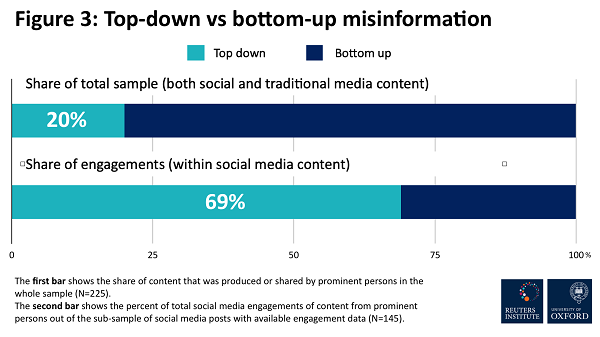 At the same time, as you can see here, these prominent users only contributed 20% of the total posts sharing false claims.

The data further underlines the power of celebrities and influencers to disseminate information. Their opinions matter, and while several of the misleading posts in this data set came from politicians, it's important to note the capacity celebrities have to fuel damaging and concerning movements through their endorsement of left-of-center theories and claims.

A possible response tactic for health authorities could be to talk to these prominent users and explain the science, in order to get them to retract their support for such theories.

So what are the platforms doing about it?

The Reuters team also assessed how each platform is working to address misleading reports, and limit their subsequent reach.

"Social media platforms have responded to a majority of the social media posts rated false in our sample. There is nonetheless very significant variation from company to company. While 59% of false posts remain active on Twitter with no direct warning label, the number is 27% for YouTube and 24% for Facebook." 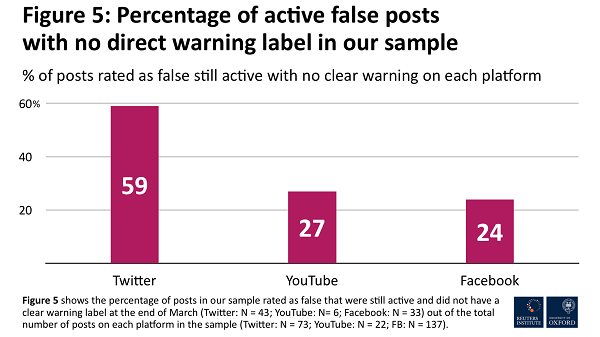 So Twitter, thus far, is doing the worst are removing or labeling misleading information.

Part of this could stem from Twitter's stance against taking significant action on tweets from political leaders - Reuters notes that:

"[US] President Donald Trump has made a number of false statements on the topic at events, on Fox News, and on Twitter."

Twitter has long grappled with how to handle President Trump's tweets, specifically, with many users calling for Trump's more inflammatory or questionable claims to be removed. Twitter has left many of these claims up, noting that they're in the public interest, and it could be that some of these tweets are among those that Twitter hasn't taken action on. Though even then, the listing above is based on volume, not influence. That suggests that Twitter still has a lot of work to do in cleaning up its discussion.

In its recommendations on how to address such, Reuters says that platforms and news outlets taking a stronger stance against such can have a significant impact - though it does come with a level of risk:

"The growing willingness of some news media to call out falsehoods and lies from prominent politicians can perhaps help counter this (though it risks alienating their strongest supporters.) Similarly, the decision by Twitter, Facebook, and YouTube in late March to remove posts shared by Brazilian President Jair Bolsonaro because they included coronavirus misinformation was in our view an important moment in how platform companies handle the problem that a lot of misinformation comes from the top."

Again, that points to the dilemma that Twitter and Facebook have most notably faced in censoring political speech. Facebook has explicitly stated that it doesn't want to be the referee in political discussion, which is why it's not fact-checking political ads - but Reuters suggests that taking a stronger stance against such can be an effective deterrent, and could help to significantly reduce the impact of such.

Given the prominence of high-profile sharers in this data, that makes sense - but can social platforms take a more definitive stance on truth and fact without perceived bias, thereby alienating user segments as a result?

You can read the full Reuters Institute "Types, sources, and claims of COVID-19 misinformation" report here.