Pinterest is moving ahead with the next expansion of its ad business, with brands in Mexico now able to launch paid promotions via Pin. 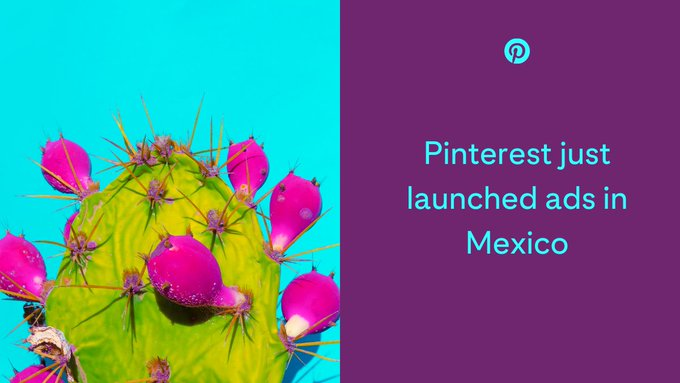 The announcement comes at the same time as Pinterest continues to expand its ad tools in Latin America, which began with the launch of Pinterest ads in Brazil last month. Pinterest says that it currently serves more than 23 million monthly active Mexican users.

"Brands play a fundamental role in the platform, making it easier for users to find the inspiration to create the life they love, and we are very excited that now they can do so through ads in Mexico"

Pinterest has seen significant expansion in international markets of late, with the platform's active audience outside the US growing by 37% year-over-year throughout 2020, in contrast to 9% growth of its North American audience.

In Mexico specifically, Pinterest still has a way to go to gain significant market traction, coming in at seventh on the top social media apps listing. But it is seeing increased engagement, particularly in regards to search activity. According to Pinterest, on-platform searches by Mexican users rose by 93% year-over-year throughout 2020.

That could open up a range of new marketing opportunities, while the broader expansion of its ad offerings will also help Pinterest boost its business and revenue programs, and maximize its earnings potential.

As noted, the announcement marks the next stage of Pinterest's business expansion, with Argentina, Colombia and Chile next in line to get access to promoted Pins. Pinterest has seen particularly strong growth in the latter two regions, and its expanded ad offerings will also open up new options for brands looking to reach these markets.

Pinterest is projecting significant growth in earnings in 2021, though it has warned of slowing usage increases as we move beyond the pandemic mitigation efforts.