If you're not creating, or considering, video content within your digital marketing strategy, you probably should be.

I mean, I'm not telling you anything you haven't heard already, but the statistics, as you also likely know, are clear:

The latest stat to add to this list comes from Reddit, which has reported that it's now averaging a billion native video views per month.

Reddit first launched its own video hosting option last August, and according to Reddit, "it’s now the dominant way people are viewing and posting video content".

To capitalize on this, Reddit also launched native video ads, which autoplay in feed, back in June. 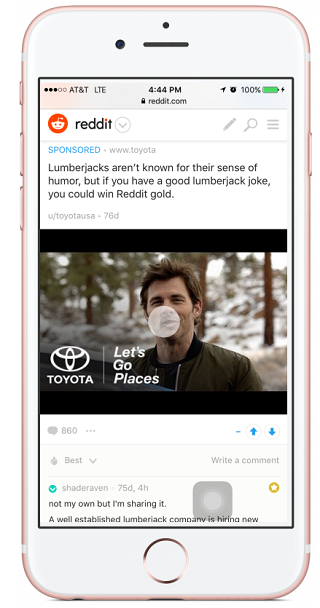 The latest growth stats underline the potential of this option, and while many businesses remain hesitant about Reddit - given the platform's reputation for being not particularly brand-friendly - the opportunities are clearly growing. Match this with the fact that Reddit also now sees more than 330 monthly active users - barely trailing Twitter, and beating out Snapchat, LinkedIn, Pinterest - and the case for at least trying out Reddit's ad options becomes fairly compelling. And that's before you consider the extremely niche, engaged groups you can reach on the platform.

Interestingly, Reddit's growth can, at least in part, be attributed to the platform's reliance on human moderation, as opposed to algorithms. Algorithms are the only way to show users the content they're likely to be most interested on the major platforms, due to the scale at which they now operate, but Reddit has been built from the ground up on human moderation per subreddit, so it doesn't need to turn to algorithm sorting to highlight the best, most relevant content on the platform.

That system is arguably better than computer algorithms at highlighting the best content - go to the 'Popular' listing on Reddit and you'll get a stream of the top ranked content, which has all been vetted by humans at some stage in the process, and is based on upvotes from other people, as opposed to a machine learning process trying to work out your interests and show you similar things.

And video content, as it is on all platforms, has now become a key part of the Reddit experience. The platform has been working hard to evolve its ad tools, and as noted, it likely is worth a look for your strategy, maybe as a consideration for your 2019 approach.

But again, which these numbers do underline is that video definitely should be high up on any brand's list.