Report Predicts Snapchat Usage will Continue to Decline in the US

I mean, this a trend report, not actual usage data, and it only relates to a single market. But it does come from a highly respected source that knows how to read the signs.

According to eMarketer's latest forecasts, Snapchat will continue to lose US users in 2019, before stabilizing in 2020. But eMarketer also doesn't predict any meaningful growth in Snapchat's US market share for the next five years, based on the information it has at hand. 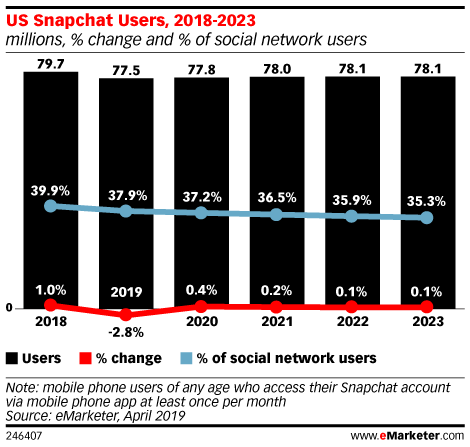 The forecast is based on Snapchat's performance over the last year, combined with the roadmap Snap's team has presented thus far for its future strategy. Snapchat's overall usage numbers declined from 191 million DAU in Q1 '18 to 186 million DAU in Q4.

As explained by eMarketer:

"Following its unpopular redesign, Snapchat has been struggling to gain users in the US. As a result, eMarketer has significantly downgraded its growth outlook for Snapchat in its latest US social usage forecast."

Again, it's obviously not definitive, but eMarketer's predictions do hold a lot of weight. Shares in Snap Inc. declined almost 3% on the release of eMarketer's report.

So which platform looks set to gain as a result of Snap's decline. No surprises here:

In a more general sense, these trends do seem to be in line with usage trends, however Snap may still be able to gain more users in markets outside of North America, an element it hasn't made any significant push on as yet.

Snapchat recently upgraded its Android platform, which will help it reach more users in places like India, where Android devices dominate the market. Given this, the report is not all inclusive, it's not all doom and gloom for Snap. But it's not the ideal news for a company which had been making up ground in the eyes of market analysts.